The Entertaining EYES OF LAURA MARS 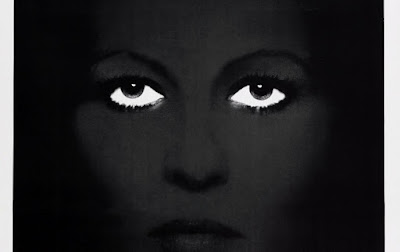 Flash-forward to this week! Since I’ve started writing for F This Movie!, I’ve been trying to highlight movies that I don’t think get enough love. Ones that have been overlooked or forgotten -- even by me in some cases. As soon as I started putting the list of what I wanted to write about together, I knew I had to have Eyes of Laura Mars as one of the selections for an article. I never see it getting any love – or hate. Eyes of Laura Mars seems to have disappeared into the ether, and that doesn't sit right with me. It’s not my favorite movie that I’ve written about for the site, but it is entertaining and doesn’t deserve to be forgotten. 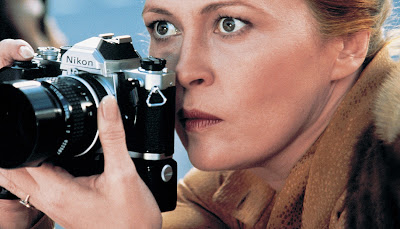 Eyes of Laura Mars was released in 1978 and directed by Irvin Kershner (known to me for The Empire Strikes Back). The film stars Faye Dunaway as Laura Mars, a fashion photographer who is known for her mix of hyper-stylized violence and sexuality. She is a controversial figure, as many do not agree with her style of art. Laura begins having visions from the point of view of a killer – one that is attacking and killing people close to her. These killings are usually caused by a knife to the victim's face. Laura uses her terrible new power to work with Tommy Neville (Tommy Lee Jones), the detective in charge of her case, to figure out who the killer is. The movie takes a number of twists and turns and uses multiple red herrings before revealing the murderer.

Eyes of Laura Mars is not a “pretty” film. It has a dark quality that makes the viewer feel as if everything is covered with a slight layer of grease and dirt. This look is a result of Laura’s artistic work, combined with the grittiness of 1970s New York. The movie is more interested in the characters seeming real and lived in, as opposed to being conventionally attractive. I like this – it makes the heightened reality seem more… realistic. Eyes of Laura Mars is based around an over-the-top and outlandish concept, but the look and feel is so grounded in the real world that the stakes seem much higher. If the film had been more polished, I would have found Laura’s visions less believable and would not have been as drawn into the mystery.

The MVP of Eyes of Laura Mars is Brad Dourif as Tommy Ludlow, Laura’s driver. He appears to be about two seconds away from a nervous breakdown throughout most of the film. Tommy’s eyes are as wild as his hair, and he doesn't seem to have slept in days, but he brings innocence and a sympathetic air to Tommy. There is a scene where he steals a flower from a vase and gives it to one of the photo shoot models – the model laughs it off, but also seems to find the gesture sweet. In a film with strong performances across the board, Brad Dourif gives the one that I consider to be the best. 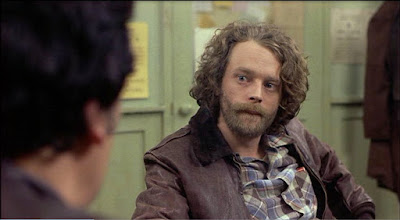 I hope that readers will take a chance on Eyes of Laura Mars. It's a lot of fun and is unlike anything made today. If you do watch it, let me know if anything surprises you!

• The "killer" POV can be disorienting.

• How do you not notice a person right behind you until you turn and get a knife to the face?

• The most '70s bedroom ever: shag carpeting, bed in the middle of an empty room, mirrored walls.

• Everything in this apartment is shades of grey.

• That woman is wearing a hell of a boa. 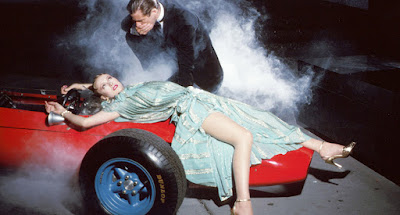 • Raul Julia is in this? How did I never notice before?

• Not a huge fan of Laura's artistic vision.

• Don't stop in the middle of a crosswalk!

• Telling cops that you saw the murder from a few blocks away makes Laura seem mighty suspicious.

• Laura has such attitude. I love it.

• Everyone’s hair is so feathery.

• TLJ is hardcore hitting on Faye. 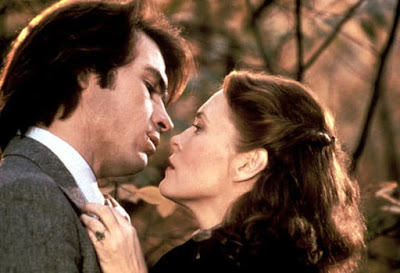 • Raul Julia is such a jerk in this movie. "I was your husband, I was never your friend."

• Look where you're going when driving!

• Her driver has crazy eyes. And crazy hair.

• Why does this movie have so many terrible hats?

• The aesthetic of this movie is so grungy.

• TLJ's voice coming out of his young face doesn't fit.

• Her visions come with such shrieky music.

• It's hazardous to people's health to hang with Laura.

• This movie has mood swings. 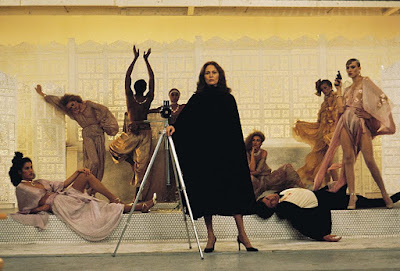 • TLJ, why are you having such trouble with that shirt?

• A lot of this cast looks similar to each other. I keep thinking murdered people are wandering around.

• Every man in this movie acts like a suspect.

• Her driver looks like he hasn't slept in weeks.

• This movie goes in some weird directions.