Have you considered… an Egyptian FEAST?!

At the crossroads of film history and carnival hucksterism lie the works of Herschell Gordon Lewis and David F. Friedman. The pair started out making “nudie cutie” pictures in Chicago and Miami, most famously their Russ Meyer knockoff, The Adventures of Lucky Pierre in 1961, moved on to pioneer the “roughie” subgenre with Scum of the Earth in 1963, and then famously pioneered the “splatter” horror subgenre with their famous trilogy of Blood Feast, Two Thousand Maniacs, and Color Me Blood Red. Blood Feast took all of four days to shoot; it looks and sounds as if it took at least twice that. 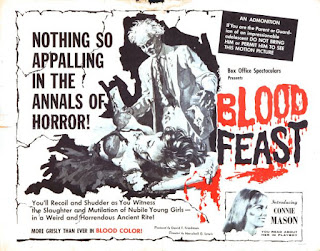 The Plot In Brief: Fuad Ramses (Mal Arnold) runs a catering business that specializes in the unique and bizarre. When socialite Dorothy Fremont (Lyn Bolton) requests exactly that for a party she is throwing for her daughter Suzette (Connie Mason), Fuad suggests an Egyptian feast that has “not been served in over 5000 years.” Dorothy says, “but how could my guests possibly eat food that old?” Ha! No, she doesn’t. Instead, she simply agrees to this mystery menu. If only she could see past Fuad’s creepy, suspicious exterior to his creepy, suspicious, psychopathic interior.

Meanwhile, Detective Pete Thornton (William Kerwin) investigates a series of bizarre killings in which the murderer takes one body part from each victim: an eyeball here, a tongue there, here a leg, there a leg, everywhere a leg-leg… Could these senseless, bloody murders have anything to do with the continued success of Fuad Ramses’s catering business? Is it weird that Pete and his best girl Suzette (yes, THAT Suzette) love Egyptian history lectures? What’s the story with the gold department store mannequin and Tiki torches in Fuad’s stockroom? 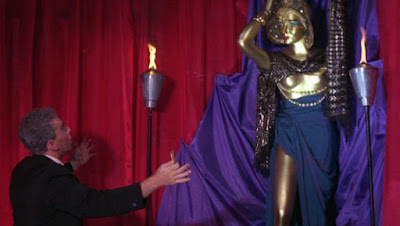 Surely, Blood Feast holds a place in horror film history, but it is not a very good film. The dialogue is awful. Most of the performances are atrociously amateurish. The first time Mal Arnold appears onscreen with his heavily penciled eyebrows and community theater-style grey hair, we say, “THERE’S THE KILLER.” The gore effects are crude, to say the least. The photography is beautiful; however, there are so many unnecessary zooms, I found myself unconsciously slapping Lewis’s hand away from the camera every time it happens.

And yet… Here’s the thing. Anyone with even a passing interest in our beloved horror genre needs to see this film at least once out of a sense of… completion. Lewis once said of the film, "I've often referred to Blood Feast as a Walt Whitman poem. It's no good, but it was the first of its type.”

(Editorial comment: WALT WHITMAN IS A NATIONAL TREASURE. BLOOD FEAST IS NOT.) 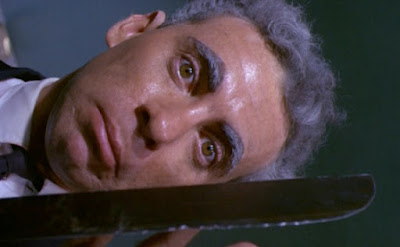 Arrow Video continues to do amazing restoration work and this new transfer is staggering. It is either a testament to the condition of the surviving film elements; the photography prowess of Herschell Gordon Lewis, who ran his own camera; or the technical skill of Arrow Video’s restoration team, but this new Blu-ray is astonishing in the amount of clarity and detail present—especially considering that this is a 45 year-old, low budget exploitation film that played mostly drive-ins. They have turned the sow’s ear of horror films into a silk purse of a Blu-ray disc. The technology behind all of these recent eye-popping cinematic resurrections has me wondering just what on earth we can expect to see in the next ten years.

ANNOYING NOSTALGIC PAUSE: One reason I am so impressed by Arrow’s new transfer is because I well remember renting Blood Feast on VHS in the earliest days of that format. Because I’d scored a summer job with Columbia Pictures Home Video during two summers of my wasted youth, my family was among the first to have a VHS machine. It was the size of a Sherman tank with huge, piano-key controls. The remote, such as it was, was attached to the machine with a thick, rope-like cable. It was the greatest. 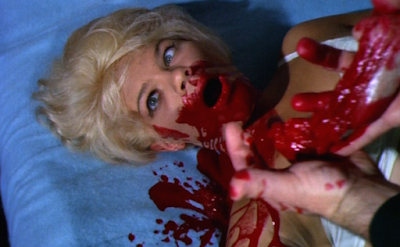 In the early days of home video, very few video stores existed. There was a small Mom and Pop store a few blocks from my house and a lone liquor store about two miles away that rented horror titles on the side. This was the era (era) of the “big box” rental strategy—many exploitation and horror films actually came in bigger cardboard box sleeves, so that they would attract the wandering eye of the hapless movie-renter perusing the narrow, ill-lit video-store aisle for that evening’s entertainment. I first rented Blood Feast from the liquor store. I remember it (and its big box) well. My friends and I watched it gleefully; Blood Feast benefits from a big audience of young people.

Gene Siskel had a surefire metric for judging whether a given film is worth our time. He famously asked, “Is this film more interesting than a documentary of the same actors having lunch?” Using this metric on Blood Feast, I would have to say no—and the new Arrow Blu-ray contains the proof! Arrow has included a commentary track with the filmmakers themselves—Lewis and Friedman—that is easily ten times more entertaining than the film itself. The stories of their partnership, the pitfalls of low-budget filmmaking (including run-ins with the law), and other obscure tales of exploitation filmmaking are like a movie unto itself. 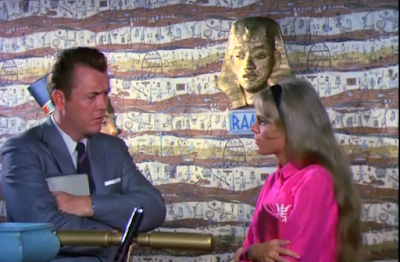 Given that Tim Burton has memorialized Ed Wood and the making of Plan 9 From Outer Space and James Franco recently did the same for Tommy Wiseau and the making of The Room, where is our biopic about the lives and careers of Herschell Gordon Lewis and David F. Friedman? My God, the raw material is there. The pair recorded several commentary tracks, and Friedman even published the first half of his autobiography before he passed away. Let’s go, aspiring filmmakers. I ain’t getting any younger.

Arrow’s disc also includes (ahem) a banquet of extra features, including the entire feature film Scum of the Earth, which features most of the Blood Feast cast; several featurettes filmed just for this release; the aforementioned commentary track; and a bizarre short film, Carving Magic, prepared for the Swift Premium Ham company in the early 1960s and featuring Blood Feast star Bill Kerwin and a young Harvey Korman. It teaches the viewer how to correctly carve various cuts of (non-human) meat at the dinner table. This short is a fitting side dish to our Blood Feast main course. Bon Appetit! 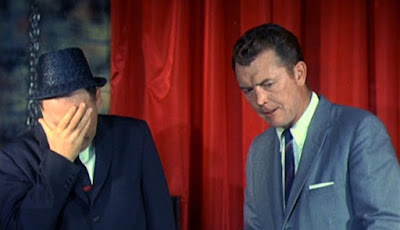 Thrills: 50%
(Your mileage may vary. Although this first splatter film was a sensation when first exhibited, it has not aged well. Ironic distance and hipster douche-baggery are essential to prop up its questionable entertainment value.)

Chills: 50%
(Not much in the way of tension here because we know from the start who the killer is—perhaps Lewis and Friedman did not want to waste precious film stock on luxuries like “foreshadowing” and “suspense.”)

Spills: 100%
(Blood spills everywhere! According to Herschell Gordon Lewis on the commentary track, they used eight or nine gallons of the stuff.)
Posted by Patrick Bromley at 5:00 AM