There are tons of racing movies that were made during the seventies, but this one might be the craziest.

Why are the seventies synonymous with the appeal of the open road? Other decades have their fair share of hot rod movies, but none of them can hold a candle to the sheer number of films about cars, racing, or plain old wanderlust that were crafted during the seventies. Maybe it was the stress of the Vietnam War, or the frustration of the Nixon administration, or the influence of the counter-culture movement. Maybe it’s all of the above. One thing is clear, though: audiences of the 1970s had gasoline in their veins in a way that we haven’t quite seen before or since.

Enter Cannonball!, one of the most bizarre little car flicks I’ve ever seen. It was directed by Paul Bartel, a character actor and occasional filmmaker who would later go on to co-write, direct, and star in the black comedy Eating Raoul in 1982. He’s also known for his appearances in cult films like Rock and Roll High School and tons of low-budget features; if the name doesn’t ring a bell, his face probably will. What’s important to know when talking about 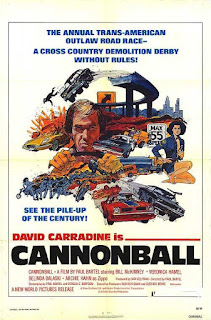 ), Cannonball Run, and even Bartel’s Death Race 2000, were Hollywood’s way of tapping into something that was really happening. Once again, we’re talking about the importance of time and place in this series. 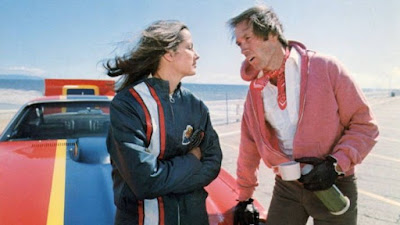 The plot of the movie isn’t really clear because I don’t think Paul Bartel or his co-writer, Don Simpson (the notorious film producer) were really that invested in telling a story as much as they were just throwing a bunch of gimmicks at the screen. Essentially, this movie gives us a bunch of drivers competing in a race that departs Los Angeles from the Santa Monica Pier and ends in New York City. Along the way, each driver can and will do everything within their power to stop their competition from winning, including sabotage, subterfuge, and even murder. If you’ve ever seen the old Hannah-Barbera cartoon series Wacky Races, that EXACTLY what this movie is, but with the most insanely-violent end for the majority of the drivers. It’s all in good fun though, and no one (I mean no one) is taking themselves seriously in this movie. Given the circumstances behind this film’s creation, it’s not really surprising that David Carradine is back as an outlaw driver on a coast-to-coast mission, though he really seems to be sleepwalking here. Other drivers or players in the game include a bevy of character actors that fans love, such as Bill McKinney (Deliverance), Veronica Hamel (Hill Street Blues), Gerrit Graham (Child’s Play 2, Phantom of the Paradise), David Carradine’s brother Robert (Revenge of the Nerds), Paul Bartel’s Eating Raoul co-star, Mary Woronov (Night of the Comet) and character-actor-legend Dick Miller (Gremlins, The ‘Burbs, every movie ever made). 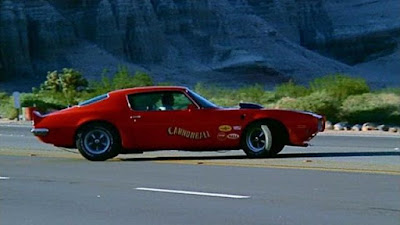 But the real fun of Cannonball! is seeing all Paul Bartel’s filmmaking pals in the most bizarre places. Where else are you going to see Joe Dante as an attendant at an auto garage, or Carl Gottlieb, the screenwriter of Jaws, spending most of the movie in intimate repose with blonde bombshell Louisa Moritz? Roger Corman appears as a district attorney, and Don Simpson as the assistant district attorney. And I can think of no other film that features Martin Scorsese and Sylvester Stallone quietly eating Kentucky Fried Chicken together.

These are the elements that make this movie worth watching. Do not be mistaken: this is not a good film. I’m not here to convince you that this is a hidden gem or an overlooked cult classic. It’s bad, sometimes aggressively so. It’s poorly acted, the fight choreography looks like garbage, and the narrative is almost non-existent. But in between those things are a bunch of actors who seem to be making their lines up on the spot and having a really good time, a subversive sense of humor that permeates the entire project, and…well, then there’s the symphony of destruction itself. This movie is basically a demolition derby spread across the entire United States. There are at least a dozen car crashes, but those are to be expected. What we don’t expect are assassins with long rifles, killers pretending to be police officers, or the extreme number of explosions that come out of nowhere. I don’t know how many cars they completely destroyed making this movie, but it’s a lot. By the end of the movie, things have gone completely past ridiculous into the territory of the absurd.

And through it all, you can feel Paul Bartel laughing and saying “I’ll show ‘em. They want carnage? I’ll give ‘em carnage. They want sex? I’ll give ‘em sex. But I’ll do it MY WAY.” Everything in this movie feels askew, but in the most wonderful and unexpected way. You know how sometimes we compare something to a car wreck that we can’t look away from? This movie is literally one long car wreck, deliberately designed to feature just about every exploitative element in existence, but without any polish whatsoever. In many ways, it’s the sleaziest brand of exploitation, but it’s done with so much personality that I can’t help but find myself admiring Bartel. 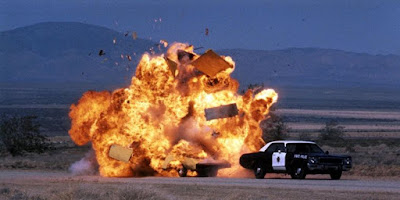 For such a strange little movie, it seems odd to compliment it on its legacy, but I think there is one that needs to be acknowledged. There are lots of films that feature cross-country races, going all the way back to It’s a Mad Mad Mad Mad World and even Two-Lane Black Top, and later movies would take inspiration from the actual Cannonball Run, the Gumball 3000, and the Bandit Run--inspired, of course, by Smokey and the Bandit -- but I think this one is the first one to pay such direct homage to old Cannon Ball himself and the race that was created in honor of the man. Paul Bartel may have been making the most of an undesirable situation, but in the process, he created something that stands completely apart. Cannonball! may not be the best in the sub-genre (it isn’t even the best racing movie of 1976), but I think it could very well be the strangest.