Diving Deep Into THE ABYSS 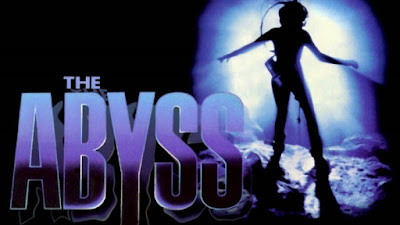 Like the depths for which it is named, there’s a lot about The Abyss that feels murky and opaque.

For a generally well-received movie from a big-name director, it feels like a mid-level James Cameron, not reaching the heights of Titanic, or Avatar, or Aliens (maybe because it borrows heavily from all three). It gets crapped on for its length, which goes to almost three hours in the special edition, and for making everybody on set hate Cameron. It sometimes weirdly has a hard time getting free from the odd shadows of Leviathan and DeepStar Six, both underwater movies that came out in the same year (this might just be me). But, it also endures in my memory as one of my favorites that year. Obviously, spoilers because the movie’s almost 30 years old. 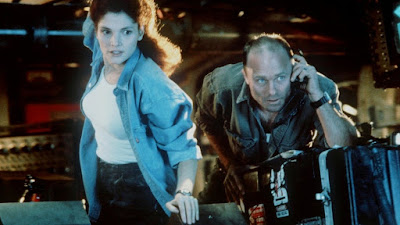 The Plot in 89 Characters

It has to be the absolutely earnest and sincere tone. All of the characters wholeheartedly believe in their own viewpoints, from practical drill rig foreman Bud (Ed Harris), to fastidious rig designer Lindsey (Mary Elizabeth Mastrantonio), to superpatriot Navy SEAL Lt. Coffey (Michael Biehn). There is no time for funny business and nonsense when you’re thousands of feet underwater, and even less when lost nuclear weapons threaten everyone’s existence. The movie doesn’t feel the need to be quippy and ironic, but there also isn’t a constant grimness, either. The story takes time to build some humanity with the rekindling of the romance between Bud and Lindsey, and some bonding moments between the crew.

The height of this earnestness is probably the ending, which gets so much crap because it brazenly proclaims Cameron’s longstanding opposition against nuclear weapons, and even in the longer special edition, feels a little abrupt. (Also, as if to herald the 1989ness of it all, the alien city has that purple, plasticky look to it.) It’s definitely cheesy, and it’s not played for any kind of subtlety, and that fits because the movie isn’t about the gritty details of encountering a new species, but what is common and important for the good of everyone involved. That lack of cynicism is refreshing, since the current trend is to make things dark because it’s more realistic. I think the cheesiness is a small price to pay for an ending that attempts to be uplifting.

You know what isn’t the most 1989 thing about the movie? The visual effects. This isn’t to say that the computer generated effects haven’t aged, but they generally hold up in the crucial parts, like the water tentacle or some of the submersible action scenes. As for the rest of the mostly practical effects, they are why the film is still vastly rewatchable now. Real actors and stunt people are swimming and playing out the action in all of it, so we don’t get that weightlessness that digital effects tend to have, which, in 1989, probably would have been made worse by the underwater setting. Cameron got around all of that by simply filming for six months underwater, creating the largest freshwater tank in the world, and building state-of-the-art audio and visual recording equipment.

The effects are notable, but Mary Elizabeth Mastrantonio and Ed Harris ground the film in reality. Mastrantonio’s Lindsey is a Ripley sister-clone, and plays a role often played by men; emotionally prickly, intense, obsessed with technical craft. Harris plays Bud as a verbal, emotive, smarter than he looks everyman who cares about his crew and is still crazy about Lindsey, his ex-wife. I really like Harris’s performance because it’s so different from how we’ve come to know him; his role is more emotionally open and verbal, and it feels like the tone of his performance is the heart of the movie. That earnestness is essential to little parts where Bud decides to keep wearing his wedding band after throwing it away in frustration, or the scene where Lindsey is revived after going into hypothermia from exposure to the cold, pressurized deep water outside of the rig. Cameron’s movies do have memorable individual characters, but Bud and Lindsey stick out to me as characters who connect to each other, this side of Titanic. 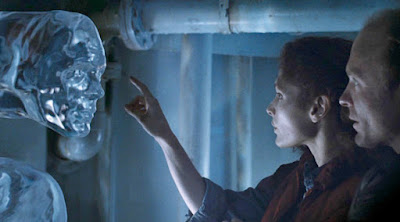 The weird Science in the Science Fiction

• Although there have been successful attempts for animals to breathe liquid, it’s only been tested once on a human, who almost died. Ed Harris filmed his scenes with the liquid by just holding his breath inside of a helmet filled with liquid.

• Cameron and dive director Al Giddings would spend five hours at a time underwater, aided by the invention of an underwater tank-filling station, which saved time on the surface.

• Cameron almost drowned when he got so wrapped up in his work that he didn’t notice that his oxygen gauge was at zero. With no oxygen to call for help, he swam up, where a rescue diver stopped and held him about 15 feet short of the surface (as per rescue procedure) and gave Cameron oxygen through a spare tank. Unfortunately, the spare tank was broken, so Cameron got a mouthful of water instead of oxygen, and was still being held by the diver. With no way to communicate what was happening, he ended up punching the rescue diver to get away, finally dragging himself out of the tank. 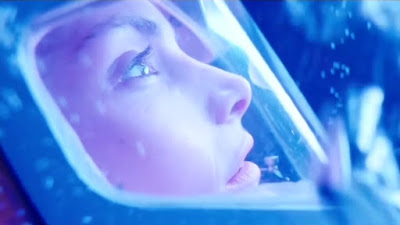 Many of the cast and crew were vocal about the grueling nature of the shoot and the director in charge of it all, and there are way more stories you can find about the unforgiving production (i.e. ear infections, throwing couches, peeing in wetsuits) but if it’s any consolation, their efforts produced probably the best underwater sequences in a large-scale production in history. Cameron himself clearly learned whatever lessons he thought he needed when going on to film Terminator 2, for which he used the technology for the water tentacle to create the T-1000 effects, and in the water scenes of Titanic. Hopefully their efforts will stand, if only so that nobody ever has to top what Cameron and his cast/crew had to endure.
Posted by Patrick Bromley at 12:00 PM