Kick off 1989 week and get ready for #FThisMovieFest with these 1989 streaming picks! 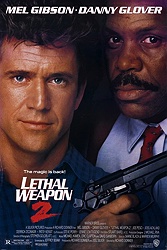 Lethal Weapon 2 (1989, dir. Richard Donner) Outside of Batman, this might be the 1989 movie I've seen the most times, mostly because of a glitch in our pay-per-view service that, for some reason, kept allowing me to watch Lethal Weapon 2 for free in early 1990. No other movie. Just Lethal Weapon 2. It was like that Michael Showalter bit about Akeelah and the Bee. And every time it magically played for free, I had to sit and watch it because I was a kid and I felt like I was getting away with something. It helps that I like Lethal Weapon 2 quite a bit, even if it makes a bunch of mistakes like giving Riggs a disposable new love interest or leaning way more heavily on the comedy. It's also hard to watch Mel Gibson in almost anything these days, especially a franchise that flirts with racism as often as the Lethal Weapon series does (especially the sequels). But I like the action, I like the characters, the infusion of Joe Pesci's Leo Getz gives the movie a fun energy before he went full cartoon in the next two films, and it's impossible for me to think about the summer of 1989 without thinking about Lethal Weapon 2. (Watch on Netflix) 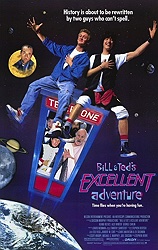 Bill & Ted's Excellent Adventure (1989, dir. Stephen Herek) I came very, very close to programming this as part of this year's F This Movie Fest, but something had to go and we were somewhat comedy heavy already with the inclusion of both The 'Burbs and UHF. I absolutely love this movie, though, which I still remember seeing as a kid at my local second run theater on a Saturday afternoon and having what I can only imagine describing as my first same-sex crush on Keanu Reeves. I love how sweet this movie is, and how smart it is while pretending to be very stupid and very silly. (Watch on Tubi TV) 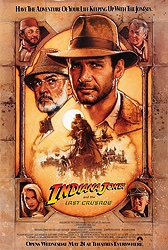 Indiana Jones and the Last Crusade (1989, dir. Stephen Spielberg) My third least-favorite of the Indiana Jones movies is still super fun and entertaining and I can't believe it's a part of the same monster summer that produced Batman and Lethal Weapon 2 and Honey, I Shrunk the Kids and Ghostbusters II and on and on. I know people love the inclusion of Sean Connery as Indy's father, but I tend to think of as a Cousin Oliver situation, like when a franchise I like will add a precocious kid or when every Lethal Weapon sequel adds one or two more major characters to the point where they won't all fit on the poster by part four. I know people love this movie -- some even more than the original -- so I'm not here to shit on it. I enjoy the movie. I just don't revisit it that often. But it's 1989 week! Now's the time to revisit! (Watch on Hulu) 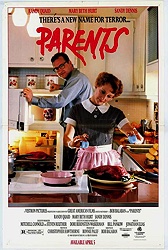 Parents (1989, dir. Bob Balaban) While the massive blockbusters of 1989 were sucking up every bit of the moviegoing public's attention and money, there were small, quirky little movies like Parents sneaking through while no one was looking. The first theatrical feature directed by actor Bob Balaban is a pitch black comedy about a boy in the 1950s whose parents (Mary Beth Hurt and Randy Quaid) are cannibals. There are no real laughs in the movie; the humor comes from just how weird and occasionally surreal the movie manages to be -- idyllic '50s nostalgia by way of David Lynch. I love that this came out the same year as Heathers because the two movies share a similar sensibility. (Watch on Tubi TV) 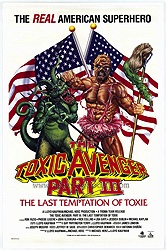 The Toxic Avenger Part III: The Last Temptation of Toxie (1989, dir. Lloyd Kaufman) Around here, I am mostly alone in my affection for Troma movies. I am even more alone in my affection for The Toxic Avenger Part II and III, because while even non-Troma fans can recognize the fun of the original film as a novelty, a much smaller percentage of people have patience for the sequels. I had this and Part II on a VHS I recorded off of USA Up All Night when I was a kid and I liked Part III because the makeup was fun and because Phoebe Legere will always be Toxie's best companion.(Watch on Amazon Prime Video) 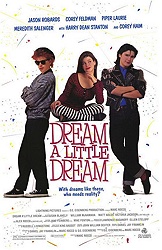 Dream a Little Dream (1989, dir. Marc Rocco) I will never be able to defend my affection for this movie, which is a variation on the popular late-'80s body swapping comedy but with a whole lot of extra mystical nonsense thrown in for no real reason. Corey Feldman swaps bodies with Jason Robards and becomes a high school student with the soul of an old man; meanwhile, Jason Robards is just trapped in limbo for no good reason. Oh, and there's a romance between Feldman and Meredith Salenger, with whom I was fully obsessed at this point in history. Harry Dean Stanton and Piper Laurie are in this. Why? They're so overqualified! Corey Haim is on hand to carry a cane and crack wise. William McNamara is a possessive boyfriend who turns violent. This is at least four different movies! And why, if Corey Feldman is walking around with Jason Robards' spirit, how does he know full Michael Jackson choreography for when the movie stops cold for a dance number? I don't care about any of it. I like this movie. I love the music. I think Stephanie's going to have more to say about this one next week, so I'll leave the smart stuff for better minds than mine. (Watch free on Vudu)
Posted by Patrick Bromley at 5:00 AM