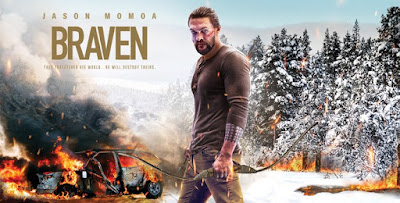 Should have called it Bravin’.

There’s great tradition in wilderness survival films — stories of rugged and individualistic frontiersmen whose command over the elements gives them the godlike power to climb trees and fight bears and all that. Build fires. Stuff I can’t do. Anyway, stark and unforgiving landscapes are great metaphors for life’s cold brutality, and the (usually flanneled) hero’s journey into the unknown will strip them of their extraneous bullshit and reveal a deeper truth about their inner potential. That truth is the intangible X factor that helps them overcome the enemy (be it human or bear — again, bears are terrifying) and return to their familiar world. Of course, none of this really applies to Braven, the feature debut of stuntman-turned-director Lin Oeding. It’s a plodding adventure yarn that seems to exist as a star vehicle for Justice League’s Jason Momoa who, though he first made his mark as the ruthless Khal Drogo on Game of Thrones, has quickly established himself as Hollywood’s premier gym bro with a heart of gold. His are Sensitive Muscles built over long hours nursing sick puppies and picking roses for your mom. Momoa is the best thing about the otherwise unremarkable Braven, which is perhaps a necessary step on the Bad Batch actor’s path to legitimate stardom. 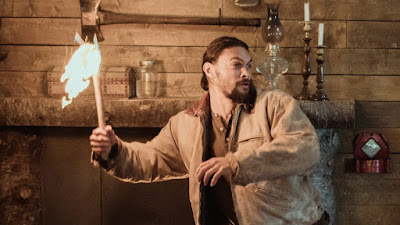 Produced in 2015 and dumped onto On Demand platforms this month, Braven tells the story of Canadian logger* Joe Braven (Momoa). Joe is a loving family man who hopes to avoid putting his father (Stephen Lang as Linden, who suffers from dementia) in a nursing home. Though Linden’s violent outbursts keep getting him into trouble, Joe (along with Jill Wagner as wife Stephanie and Sasha Rossof as daughter Charlotte) doesn’t want to strip the proud man of his independence. When the two travel to the family’s secluded cabin to talk things over, they discover a huge bag of cocaine hidden in the shed. It’s not Joe’s cocaine, of course (narcotics inhibit protein synthesis**), so something’s off. It turns out that Braven’s employee Weston (Brendan Fletcher) has gotten in deep with a drug trafficker named Kassen (Garret Dillahunt, trying like hell to twirl tiny little mustache hairs) and was forced to hide the drugs in Joe’s cabin after crashing his truck on an icy road. Kassen and his cronies are on their way to collect, forcing Joe, Linden, and Charlotte (who stowed away in their truck to spend more time with her dad) to batten down the hatches and prepare to get all Home Alone up in this bitch.

Though it was likely greenlit to capitalize on the success of films like The Revenant and Interstellar, it’s hard to watch Braven in 2018 and not think about the work of Taylor Sheridan, the major creative force behind films like Sicario, Hell or High Water, and Wind River. Sheridan understands all that metaphorical narrative bullshit I talked about earlier, and his films use the surface elements of character and setting to develop deeper themes. Apart from the well-worn idea that “a man should defend what’s his,” there’s very little thematic development going on in Braven, nor does it show off any special affinity for excessive violence or style. We’re in the age of The Raid and John Wick, after all, and it’s a significant bummer to see such bland and neutered action from Lin Oeding, a stunt performer whose career dates back to the late ‘90s. The film offers one fun gag in which Joe hits a guy with a flaming axe and a bottle of moonshine, but the other significant kills — even one involving a hot poker — are presented in quick cuts with most of the gore left off screen. This isn’t a rating things, mind you, because Weston and his buddy Hallett (Zahn McClarnon) use the word “fuck” like they just discovered it. As a result, the film’s attempts to earn its R rating ultimately come off as immature and uninspired. 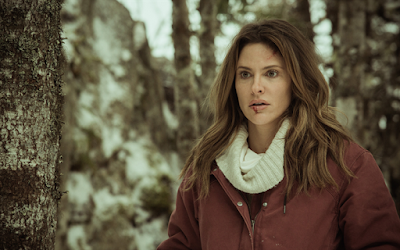 Perhaps I should go easier on Oeding. It’s his first movie, after all, and it’s a competent one that does enough of the things it sets out to do. But Braven is a Redbox Special through and through. It’s unambitious, repetitive, and very dull. Momoa, as I mentioned, will be a legitimate movie star very soon. He’s intuitive and charming when he gets the chance. He’s that right kind of hunky, too, able to cut a strong figure without the inhuman sheen of someone like Dwayne Johnson. We’re drawn to him in that inexplicable way that casting agents have been trying to capture and bottle for generations. But his Joe is the only character with even the slightest development (which the actor expresses through a series of pointed grunts); no one else gets even half a chance to be anything more than a caricature. Stephanie’s stuck with that Worried Mom on a Cell Phone part, and her third act arrival at the cabin — with a crossbow, because crossbow lessons are her only other character trait — is laughably brief and largely inconsequential. The goons, cops, and neighborhood extras are all faceless. It’s only after ninety minutes that we realize the intended emotional crux of the entire film may have been the relationship between Joe and Linden. If so, that also comes up short. 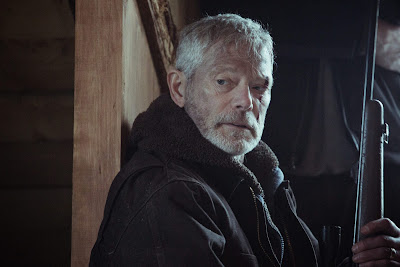 So, no, don’t see Braven, not even for Sensitive Muscles^. But do acknowledge that a voice like Lin Oeding's (who, on top of his stunt work, has directed years of television) deserves a chance to develop. All he needs is a little confidence. Braven feels shaky and insecure at times, like the director stuck with what he was sure he could pull off and didn’t want to rock the boat for any more than that. That’s okay, I think. Movies are hard. Every one of them is a miracle, and this one is nothing to be ashamed of. Each of us would be lucky to get something this good on the first go. Am I reaching a little, giving Braven a pass in an effort to stir up a little movie love? Maybe! Look, I’ve been Redboxing for weeks, and I’m not sure I can stand writing the words “dull” or “underdeveloped” many more times. Let’s say that Braven is “earnest” and “well-meaning” instead. That’s innocuous enough. Look, I didn’t even mean to Redbox this week! My mom rented this one On Demand before I had a chance to tell her not to! It’s that damn Sensitive Muscles. She can’t get enough of him. Alright, now I’m just making this weird.

*I wrote this as “Canadian lager” at least three times before catching the typo.
** Probably.
^Is that going to catch on? Should I stop trying to make that happen?
Posted by Patrick Bromley at 5:00 AM