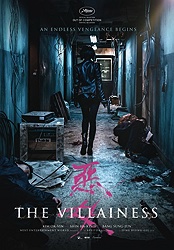 The Villainess (2017, dir. Byung-gil Jung) Robyn Buckley wrote about this movie at the end of last year, and I'm in total agreement with her enthusiasm of the amazing action sequences. They really are incredible, in particular the first-person set piece that opens the film. The rest of the movie is...less great, alternating between familiar assassin movie beats and confusing melodrama. It's also quite long, which doesn't help matters. For those of you with a Hulu subscription, it's definitely worth watching for several jaw-dropping action scenes. The rest of you might want to wait until it's streaming on more platforms. (Watch on Hulu) 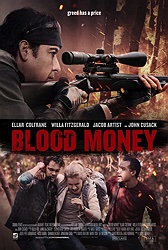 Blood Money (2017, dir. Lucky McKee) One of my favorite directors currently working in genre film, Lucky McKee has been known for more than a decade as someone who makes horror movies. He's branched out with his latest, a crime thriller starring John Cusack and his bandana as a criminal who hunts down a couple kids in the woods after they find the money he just stole. Though it feels, in many ways, like just the latest DTV thriller for which Cusack is collecting a paycheck, there are all sorts of interesting touches throughout that you only get with a filmmaker like Lucky McKee. The female lead dominates the film and is the most interesting character, bucking expectations of who she would be in every other movie of this type, while even Cusack's villain isn't quite as simple as he might seem. I don't think it all works in the end, but it's fascinating to watch McKee work in a different genre and bring his unique approach to storytelling to a different kind of movie. (Watch on Netflix) 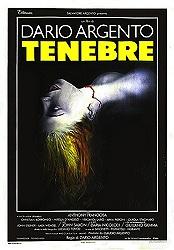 Tenebrae (1981, dir. Dario Argento) One of my favorite Argento films and one of the best giallo films ever made has now been added to Shudder! If you've never seen it, please fix that immediately. If you've never seen any Argento, this is a great place to start. In fact, if you've been reticent to check out Italian horror in general, Tenebrae is a perfect gateway movie. It's crazy but in an accessible way, stunningly well directed and super entertaining. (Watch on Shudder) 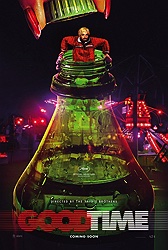 Good Time (2017, dir. Benny and Josh Safdie) This was a favorite of many people I know and respect from last year. It wasn't quite a favorite of mine, but I do think it's good and absolutely worth seeing. Robert Pattinson continues to be good in almost every non-Twilight performance as a hustler trying to make a score, outrun the cops and get his brother out of the hospital all over the course of a single night. I completely understand what it is that the movie's biggest supporters are responding to: it has a pulse and an energy unlike anything else I saw last year. It's a great showcase for everyone involved, from cinematographer Sean Price Willams to composer Oneohtrix Point Never to Pattinson to, most of all, the Safdie brothers, who made a good movie that also works as a brilliant calling card for literally anything they want to do next. They have my attention. (Watch on Amazon Prime) 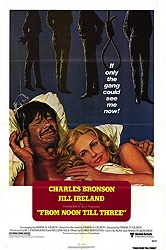 From Noon Till Three (1976, dir. Frank D. Gilroy) This was a discovery for me last year. I expected very little from a western starring Charles Bronson and Jill Ireland, probably because Bronson is always Bronson and the only other collaboration I'd seen between them was Assassination, which is pretty dismal. Imagine my surprise when From Noon Till Three wound up being totally offbeat and unpredictable and completely charming. Bronson has never been better as an outlaw who shacks up with a widow to hide out and provide an alibi after pulling a job; where the movie goes from there, I won't say. It's a performance unlike anything I've seen Bronson give in a film unlike anything else I've seen him appear. It's a gem. (Watch free on Vudu)
Posted by Patrick Bromley at 12:00 PM

Email ThisBlogThis!Share to TwitterShare to FacebookShare to Pinterest
Labels: from noon till three, good time, i stream you stream, lucky mckee, tenebrae, the villainess