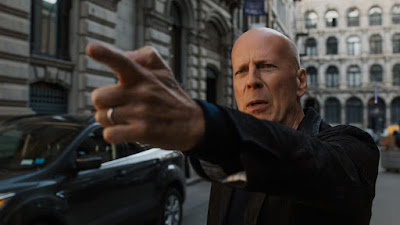 Some quick thoughts on four films now in theaters.

These are ranked least favorite to favorite.

Death Wish (2018) - I was mildly embarrassed to see Death Wish (2018) but too curious about a new Eli Roth movie not to go. And…it’s weird and not very good. Of course, the timing of the film in awful and what it’s saying at certain points is gross, but it didn’t strike me as being made with malicious intent. You can easily be offended by this movie if you choose to be, so go in with that warning. Death Wish (2018) feels more like a movie made by an over-excited kid who likes cinema violence and lives in a movie bubble. There are several scenes where Eli Roth could have pushed the victimization elements further (like in the superior Death Sentence) but reigns himself in. Its feels like he’s trying to make a palatable (and more mainstream than usual for him) revenge movie and not one by which you feel emotionally challenged. There’s good and bad to that: on one hand, it was a relief as a viewer to not have to see it get horrifying, but on the other it isn’t honest with seeing through its ugly premise. Bruce Willis is spotty; sometimes engaged and other times not. He’s most interesting pre-attack when he’s playing a normal, passive guy. The movie has a lot of annoying side bits like radio show host weigh-ins or Bruce Willis learning how to do everything crime via YouTube videos. I can’t think of any positives about Death Wish (2018) really. It’s just sort of there. 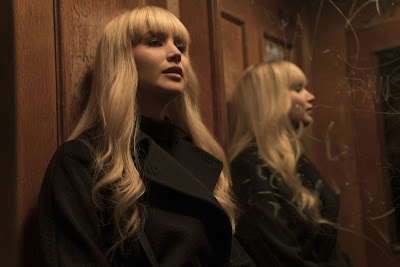 Red Sparrow - This one was a little bit of a relief because it felt like a throwback to mid-'90s Paramount globe-trotting thrillers. Jennifer Lawrence, accent aside, is good here carrying a surprisingly action-lite suspense movie that dips at times into seedier Paul Verhoeven (Basic Instinct, Starship Troopers) territory. For that I commend it, because it feels more dangerous than other spy movies where the edges are sanded off. While not thinking Red Sparrow is a great success overall (it’s not interesting enough to justify a hefty runtime, the character motivations and plotting feel writer and not character influenced, the sex is not hot which is a problem for a movie selling sex as one of the agent’s weapons of choice), I do think this is better than other recent spy thrillers like Atomic Blonde, Salt or any of the Black Widow stuff in The Avengers films (I prefer her character in the Captain America movies). Red Sparrow is worth seeing but you’re fine if you wait until VOD or cable. Then again, it’s beautiful to look at so maybe a trip to the theaters is ok too. 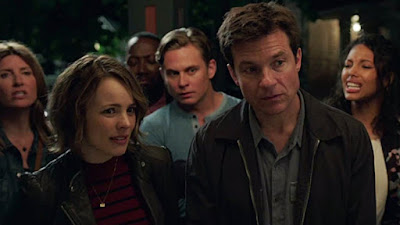 Game Night – This is the type of movie you can recommend to anyone. Game Night is fun, with a strong cast (Rachel McAdams, Jesse Plemons and Kyle Chandler are standouts) and more cinematic than usual for the modern-day comedy genre. Directors John Francis Daley and Jonathan M. Goldstein add some cool transitional touches to make the movie look like a board game and the whole film has that fun Clue vibe to it (it’s not as good as Clue). My only criticisms are that I think the filmmakers know the Plemons character works so they push it too much and there are times when the not-great action interrupts scenes where you’re already enjoying the chemistry between characters. I tweeted after I saw it that Game Night is a 3.5/4 movie fighting like hell with a 2.5/4 movie. In the week that has passed, I find myself still thinking about Game Night with affection and would stop and watch it again if it came on cable. The cool thing about the movie is that most of the laughs come out of character traits and not punchlines. That ages better. 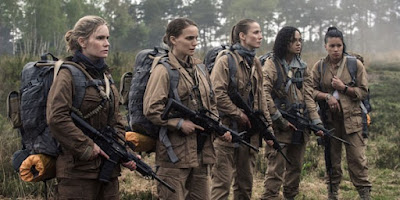 Annihilation – This movie blew me away. First, it’s hypnotic. Second, it’s technically amazing, with a world that is similar but distorted, presented in an interesting way visually. The score is great, the performances strong…nearly everything worked for me. Are there a few plot details I didn’t love? Sure, but I don’t let that bother me if I’m riding the wave of a movie I really like. I’ve read/heard Annihilation be described as a statement about depression and self-destructive human tendencies and I can see that. The cool thing about Annihilation is that I think it allows for different readings based on who you are individually. For me, it was more of a body horror movie. Not to get in too much detail, I have skin problems on one of my legs that I need treatment and medicine for and this movie’s scenes of environments with plaques and scales or other distortions really unsettled me in a good way. I felt a sort of weird kinship with the characters as they witnessed what they usually saw as normal unravel; it’s comforting in a way I wasn’t expecting that’s hard to describe – like you’re not alone and just as confused as they are. Like the setting of the film itself, Annihilation is mysterious, raw and feels like it slipped in theaters by accident. We don’t usually see movies like this.

Your turn! What did you think of these films? Have you seen anything else recently that’s worth recommending?
Posted by Patrick Bromley at 5:00 AM