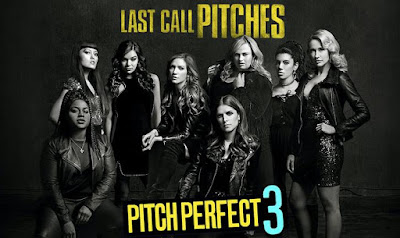 Pack it in, pitches.

Followers of me and my bullshit might know that I’m an unapologetic advocate for 2012’s Pitch Perfect. My undying love for Anna Kendrick aside, I think it’s a legitimately well-written sports movie (adapted from Mickey Rapkin’s memoir by 30 Rock alum Kay Cannon) with a quick wit and an eye for satire, more a relative of Clueless than of Bring it On. It’s a movie about a rag-tag group of misfits looking for inclusion and harmony, a movie that understands why music is inherently symbolic and uses that built-in layer to communicate larger themes. It was a big enough sleeper hit to earn a sequel (2015’s aptly-named Pitch Perfect 2) which, though it doubled its predecessor’s box office take to become the most successful musical comedy of all time, also doubled down on the dopier and more obvious comedic elements before devolving into The Fat Amy Show and abandoning everything that made the original effective. It was a huge disappointment, a strong indication that the formula was already tired. Still, there was a reasonable expectation that 2017’s Pitch Perfect 3 might right the ship and send the girls out on a high note (pun absolutely intended). It doesn’t. Pitch Perfect 3 is a sloppy, meandering nightmare that manages to be worse than its predecessor, a cast vacation masquerading as a movie. 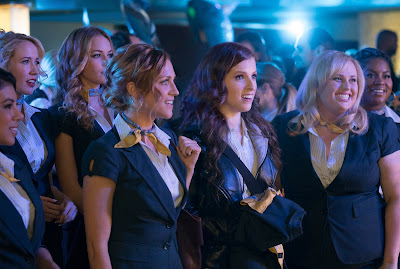 Three years after their victory at the World A Capella Finals, the former Barden University Bellas are navigating a shaky course into adulthood. Now that senior Emily (Hailee Steinfeld) has taken over the group, Beca (Kendrick), Amy (Rebel Wilson), Aubrey (Anna Camp), and Chloe (Brittany Snow) are all in career limbo and pining for a chance recapture their former glory. Opportunity knocks in the form of a European USO tour, where the Bellas (further including Ester Dean as Cynthia Rose and Hana Mae Lee as Lilly) will compete for an opportunity to open for the eccentric and influential DJ Khaled. Their major rivals are Evermoist (yes, really), a rock act led by Calamity (Ruby Rose). Tailing along is the series’ snarky Greek chorus, Gail Abernathy-McKadden (Elizabeth Banks) and John Smith (John Michael Higgins), who are making a documentary about the Bella’s historic rise and inevitable fall. Meanwhile, Amy’s long-lost convict father (John Lithgow) struggles to get back into her life while Chloe pursues hunky soldier Chicago (Matt Lanter) and Beca considers a professional recording career with the help of producer Theo (Guy Burnet). Will the Bellas earn a gig that’ll keep them together forever? Will Amy’s father betray their newfound bond? Will Anna Kendrick come back for The Accountant 2?

Pitch Perfect 3 is a textbook perpetrator of what I’m going to call The Jurassic World Swindle: It’s a sequel that retains many of the tangible details from the original film (an opening number, a riff-off, Fat Amy jokes, maxims about the importance of female friendship, more Fat Amy jokes, someone falling down, and a closing number), but it doesn’t seem to know or care that these pieces are supposed to stem from character and fit in the context of a larger narrative. For example: Fat Amy calls herself fat so that “twig bitches…don’t do it behind my back.” The irony of her constant self-deprecation is that she’s in fact deeply insecure, which becomes relevant later on when the girls reconcile their differences (finding the aforementioned harmony) before Pitch Perfect’s final act. Here, her fat jokes amount to a series of mean-spirited non-sequiturs that go nowhere. Or consider the riff-off, the a cappella tournament where groups perform songs that fit into randomly-chosen categories: In the original film, it’s an expository device that introduces Beca to the Bellas’ goofy and self-important world (and her rousing rendition of Blackstreet’s “No Diggity” proves that she may actually fit into it). Here, the girls insist on riffing-off against a group of musicians who’ve never heard of the game and then lose because they don’t have instruments. The competition subplot then hangs out in the background until it solves itself. So, why a riff-off? Because we recognize it. Because of The Jurassic World Swindle. 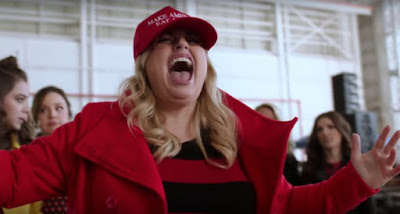 These quibbles aside, the most heartbreaking thing about Pitch Perfect 3 might be that series screenwriter Kay Cannon’s delightfully wry and caustic voice actually comes through loud and clear in a few smaller moments, usually fourth-wall-breaking asides or quick exchanges between Kendrick and Snow. Who knows if Cannon — who co-wrote the screenplay with School of Rock’s Mike White — did more than a dialogue polish here and there, though, because the rest of the movie is a revolving door of heedless, lazy whatthefuckery. Scenes happen next to each other rather than in a sequence. Many of the gags are telegraphed with the expectation of subversion and then never actually subverted. To wit: the girls walk into a party in DJ Khaled’s hotel suite, notice an apiary just hanging out in the middle of the room, and remark, “I bet that’ll cause some trouble!” And it does! Someone accidentally knocks it over, and fucking bees escape and attack everyone! Later, Beca and Amy stage a Mission:Impossible-esque siege of Lithgow’s yacht (He kidnapped the other Bellas for, well, reasons) that ends with a performance of Britney Spears’ “Toxic,” a martial arts spectacular, and a gas explosion. Lithgow disappears from the film after that. We’re told he’s been arrested for, well, reasons. His character never comes up again. Oh look, they’re singing! 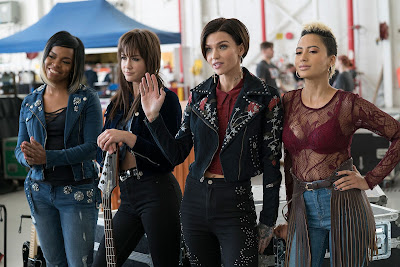 I’m probably the only person on Earth who cares that Pitch Perfect 3 is bad, but I do and it is. It wastes a great cast (if you’d told me last week that I’d hate a movie starring both Anna Kendrick and Ruby Rose, I’d have slapped you in your silly face for being so silly) and spoils a lot of the charm that made the original film such a gem. I get the feeling that Pitch Perfect 3 was a lot of fun to make, that the cast and crew saw the chance to take a three month USO-sponsored tour of Europe and took it. I won’t begrudge them that. Who would? I just wish they’d also taken an opportunity to play in the sandbox Cannon and company created instead of shrugging it all off and turning in a lesser episode of Glee. There’s one scene in particular that feels like a real kick in the gut: Before the final performance, Beca vows to turn down DJ Khaled’s offer for a solo act because she’d never leave the Bellas behind. The girls then explain that each one of them has found new career opportunities post-Bellas. Off screen. Without our knowledge. While we were doing that stuff with Lithgow’s yacht and the bees. Again, this is a movie about a listless group of singers who only feel whole when they’re performing together. They got together because they didn’t have other opportunities. That was the point. But whatever. Who cares? Just me, I guess. Just me.