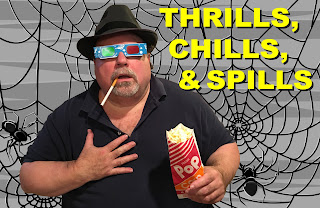 That old saying certainly applies to Italian horror maestro Dario Argento’s sophomore effort, The Cat o’ Nine Tails, the follow-up to his immensely successful debut film, The Bird With The Crystal Plumage. Argento himself famously regards The Cat o’ Nine Tails as a failure, his least favorite of all of his films. In an interview included on the new Arrow disc, he says he finds the film “too American” in its style and tone. He said he wanted the film’s character to be more intrinsically Italian. 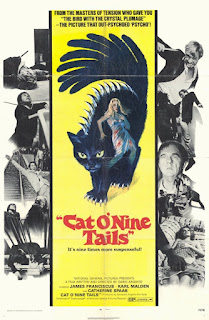 Although slavishly following his own template, Cat comes across as half-baked compared to Bird, which had critics hailing Argento as the “Italian Hitchcock.” Both films involve a murder investigation conducted by an outsider, and while Bird’s climactic twist is cleverly conceived and executed, the final revelation of the killer’s identity in Cat is more of a shrug: the person in question must be the killer because… that’s who the screenwriters chose, possibly in a game of “Eenie-Meenie-Miny-Moe.” It seems that arbitrary. Why are other suspects innocent? Because they didn’t get picked to be guilty (plus, many of them are dead.)

The Plot In Brief: Franco Arno (Karl Malden), a blind retiree, is raising his niece Lori (Cinzia De Carolis) in Turin, Italy. One night while taking a walk, the pair chance upon an unusual, suspicious occurrence outside the gates of an unusual, suspicious medical facility. The next day, Arno learns from journalist Carlo Giordani (James Franciscus) that the place was burglarized and the night watchmen killed. A series of bizarre murders follows, all of them linked to the mysterious Terzi Institute. 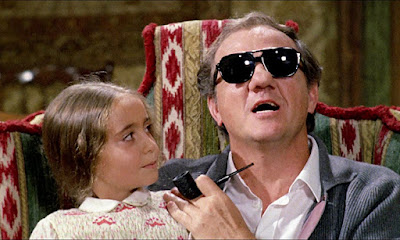 Giordani is assigned to write about the murders. Arno has more than a passing interest in the crimes as well. Their investigation pulls the men down some twisted paths to myriad suspects, leading to the kidnapping of Arno’s niece. Can the two men follow the clues and identify the killer? Will little Lori be returned safely?

First, let me state that Karl Malden is the whole show here. His performance as Franco “Cookie” Arno is sweet, clever, and very well observed. Malden’s performance so dominates the film that, at one point, the audience is led to believe that Franco himself could be the murderer. Alhough that would make zero sense from a narrative perspective, Malden gives such a great performance that we feel it could be true. Malden’s skill is reinforced in several of the Arrow disc’s special features, in which Argento, De Carolis, and production manager Angelo Iacano, in separate interviews, all sing Malden’s praises and talk about how wonderful he was to work with. Argento reminds us that Malden was one of Marlon Brando’s teachers at the famed Actors Studio, which made me realize that’s probably Malden was cast in so many of Brando’s films: On the Waterfront, A Streetcar Named Desire, and One-Eyed Jacks, to name a few. 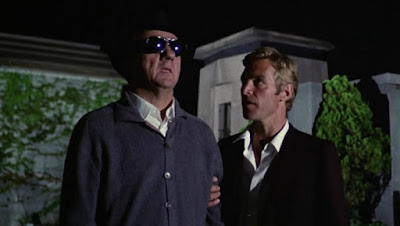 Malden’s relationship with child actress De Carolis is so sweet and unforced that I imagined a whole series of films in which Cookie and Lori travel around the world solving crimes: Cookie and Lori and the Case of Thorn Mansion, Cookie and Lori Down Under, Cookie and Lori Meet Pippi Longstocking. What about an animated crossover with Scooby-Do? Zoinks!

From the beginning of his directing career, Argento is to be commended for his progressive view of gender roles. His early films feature gay and transgender characters that are far more nuanced than those of other films of this era (era). In Cat O’Nine Tails, Argento suggests that gender is fluid, takes his protagonist for a tour of a gay bar, and presents a homosexual love triangle as a possible motivation for the crimes. This is important to the story because the “MacGuffin” in this specific murder mystery involves a scientific study of the effects of “extra X and Y chromosomes” in the human body. Much like the violence in the Japanese crime films I have been watching lately, the view of sexuality in these early Argento films seems refreshingly progressive and modern, not employed for cheap laughs or as an exploitative gimmick. When a possible suspect has a moving monologue about his lover leaving him, it is presented not as farce, but as genuine tragedy.

What I will now dub “the Italian Curse” raises its somnambulant head here. What talking with your hands and having an Uncle Gino is to Italian people, a stultifying second act is to certain Italian movies. The first twenty minutes and the final ten minutes of The Cat o’ Nine Tails are dynamite. The second act feels interminable, mostly because Karl Malden is offscreen for a good twenty minutes. Proof that Argento was slavishly following the narrative architecture of Bird can be found in one of Cat’s subplots: a suspenseful scene featuring a character named GiGi the Loser (Ugo Fangareggi). GiGi is so interesting and so specific, he harkens back to a similar quirky cameo, Mario Adorf as Bird with the Crystal Plumage’s crazy, cat-eating artist Berto Consalvi. Both scenes even occur at about the same point in each film.

Arrow Video has assembled a handsome package here: a dark red slipcase holds both the plastic keep case and a booklet of photos and essays. The keep case, in what is quickly becoming a reissue house standard, holds double-sided art, so the film buff can decide whether to display the film’s original poster or newly commissioned art by Candice Tripp. The slipcase also holds a small poster reproduction; the keep case contains small lobby card reproductions. Bonus features include a great commentary with critics Alan Jones and Kim Newman; interviews with the aforementioned Argento, De Carolis, and Iacano, as well as co-screenwriter Dardano Sacchetti; three original trailers; and a text-only recreation of the film’s original ending. It’s a handsome package for an interesting film. Needless to say, Arrow’s new 4K scan of the film is beautiful.

THRILLS: 80%
(Thrilling to see Karl Malden at the top of his craft and Franciscus convincingly portraying a large block of blond wood.)

CHILLS: 70%
(The ramp-up of tension and suspense is dealt a blow by the second act snooze fest.)