Thrills, Chills, & Spills: THE BIRD WITH THE CRYSTAL PLUMAGE

The Bird with the Crystal Plumage doesn’t get enough respect. Watching it again on Arrow Video’s fantastic new Blu-ray disc, I was struck by just how accomplished it is, considering it was Italian horror wunderkind Dario Argento’s first film. When it was first released in 1970, it was remarkably influential; I can imagine many American filmmakers of that time screening it, digesting it, and making its unique mise-en-scene part of their own subconscious oeuvres. Individual shots in Bird seem to have directly inspired shots in Francis Ford Coppola’s The Conversation, William Friedkin’s The Exorcist, Stanley Kubrick’s A Clockwork Orange, and Brian DePalma’s Dressed to Kill. And am I the only one who hears hints of Charles Bernstein’s A Nightmare on Elm Street score in Ennio Morricone’s haunting score for The Bird with the Crystal Plumage? 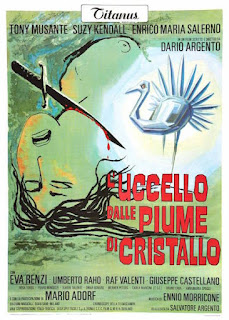 Argento, who started out as a screenwriter (he wrote the original story for Once Upon a Time in the West and the screenplay and dialogue for the Italian version of Cemetery Without Crosses) has back-engineered a mystery film in which every clue and every bit of foreshadowing is designed to throw us off the scent. The Bird With The Crystal Plumage is as impressive a mystery screenplay as the finished film is an impressive horror film.

The Plot in Brief: Disillusioned, blocked writer Sam Dalmas (played by Tony Musante) accidentally witnesses an attempted murder through the window of an art gallery owned by Monica Ranieri (Eva Renzi). Because Dalmas is the only eyewitness to the crime, Police Inspector Morosini (Enrico Maria Salerno) confiscates Dalmas’s passport so that he cannot leave Italy. Dalmas becomes obsessed with a string of similar murders. He and girlfriend Julia (Suzy Kendall) begin to research the case on their own, which leads them both to several surprising revelations…

Color is important. Even in this first directorial effort, we see Argento’s obsession with a shade of red that does not actually exist in nature—a preternaturally bright, almost neon shade of rich scarlet that we might dub “Argento Red” (though in my mind I usually refer to it using the title of his fifth film, Deep Red.) Argento also uses black in interesting ways here. When Dalmas witnesses the murder attempt, Monica struggles with a mysterious figure in black; when her husband shows up at the crime scene, he is the only person in the very crowded gallery wearing black, casting him into suspicion. Later, when Dalmas and the detectives on the case are going over clues at the police station, every character in the crowded station room is now wearing black too; it calls into question the reliability of our own assumptions, underscoring the number of possible suspects and the odds of solving the case. This distinctive use of color would continue throughout Argento’s long career. It is interesting to see it here, fully formed, in his first film.

Odd directorial touches abound. An evidence technician, who presents an endless series of photographs, wears large black sunglasses indoors as if blind. We are shown banks of computer consoles with spinning, seventies-era (era) tape drives, but these computers do not help solve the case in any way. My favorite oddity involves simple counting: Dalmas is told that an important witness lives on the third floor and we cut to a tilt shot that tracks up the building… to the fifth floor. This apartment window is shown many times and does involve an important clue, but it is always clearly on the fifth floor, not the third. Do they count things differently in Italy?

Now, I am no shrinking violet, but I actually prefer the suggested violence in The Bird with the Crystal Plumage to the much more explicit gore of Argento’s later films. This is clearly a personal preference, but there were a few shots in his recent The Mother of Tears that made me question why Argento felt compelled to include imagery so nauseating and misogynistic. Actually, I find that, in recent conversations and podcasts, I have used the phrase, “I am no shrinking violet, but…” so often that I may need to conclude that I am, in fact, a shrinking violet. A pretty little shrinking violet, who likes my stabbing murders with merely a soupçon of gore!

My one quibble with The Bird with the Crystal Plumage carries over from my exploration of several other earlier Italian horror films over the past few years. Italian horror and crime films tend to have blockbuster openings, terrific final acts, and rather meandering middles. I once posited that perhaps these famous directors only helmed the beginnings and endings of these famous films and left the “middles” to less talented underlings. In Bird with the Crystal Plumage, this “second act slog” is ameliorated somewhat by a delightful, tangential scene where Dalmas goes to visit reclusive artist Berto Consalvi (Mario Adorf). Consalvi is so odd (he serves Dalmas a stew made of fresh cat!) that the entire scene snaps us back to attention, though it has nothing whatsoever to do with the rest of the narrative. It is as if in the middle of Raiders of the Lost Ark, Indy goes on a side trip to visit the man who made his famous whip.

Extras on the new Arrow Video disc include a dynamite analysis of the film by Kat Ellinger, editor-in-chief of Diabolique Magazine and co-host of their “Daughters of Darkness” podcast. Ellinger compares Bird to its source novel, The Screaming Mimi, and discusses at length her theory of the “inept male” in Italian giallo cinema. We also get interviews with Dario Argento, Gildo Di Marco, and Eva Renzi; a visual essay on the film’s style by Alexanda Heller-Nicholas; and an illuminating audio commentary by author Troy Howarth.

Still, the real star here is the new 4K transfer of the original camera negative. To say that the resulting image is stupendous would be an understatement. I doubt if the film ever looked this good in theaters in the early 1970s.

OFFICIAL THE BIRD WITH THE CRYSTAL PLUMAGE THRILL-O-METER READING: 91.666%

Thrills: 75%
(The first and last acts are gangbusters. The second act, not so much.)

Chills: 100%
(A palpable sense of violence and dread permeates the entire film.)

Spills: 100%
(Some ingenious attempted murders featuring death by straight razor, automobile, and modern art—and one murder that might not be a murder at all.)