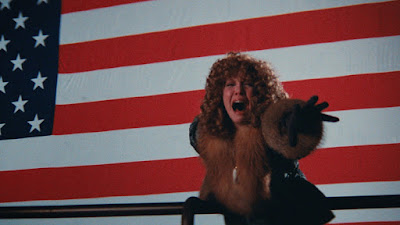 Spend a day and a night with me in the City of Brotherly Love!

My month of programming marathons continues with this suggestion from our very own Rob DiCristino, a native of Philadelphia and the handsomest man I've ever known. Don't get me wrong: he's also a very thoughtful and talented critic as well as a great friend I'm lucky to have, but the reason he writes for F This Movie! is because of his physical attractiveness. I truly appreciate his contributions both in his articles and on the podcast, but the dude is pure eye candy.

Seeing as how I've already programmed marathons specific to New York, Chicago and Los Angeles, it seems only fair to put together a slate of movies that are Philly based. This one was harder than the others, though, because fewer movies are shot and set in our nation's former capital. I also allowed myself only one (1) Rocky and one (1) Shyamalan.

Enjoy, everyone! But mostly you, Rob. 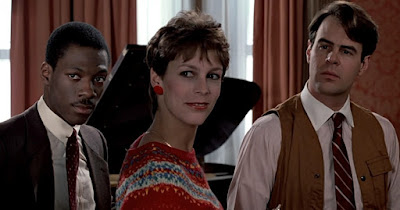 Still my favorite John Landis comedy and one of my favorite comedies of the '80s, Trading Places is a great way to kick off our Philadelphia marathon. It's the perfect mix of Preston Sturges screwball throwback and '80s-specific stuff like nudity and race jokes. Every actor in it is great, in particular Ralph Bellamy and Don Ameche as the awful Duke brothers. I usually like to start these marathons off light, so Trading Places is pretty much perfect. 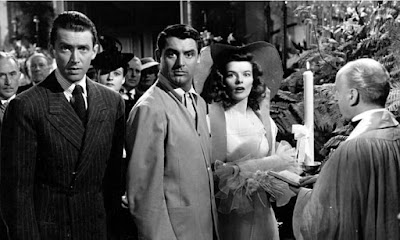 Ok, it's way too on the nose. Cut me some slack, though; I didn't program Philadelphia anywhere, though that has more to do with it being crushingly sad than it does with my concerns about being too obvious. Besides containing the namesake city in the title, this is one of the best romantic comedies ever made -- sharp, sweet, unpredictable and featuring three great performances from three of the greatest movie stars Hollywood ever produced. Movies like The Philadelphia Story remind us that greatness is timeless. 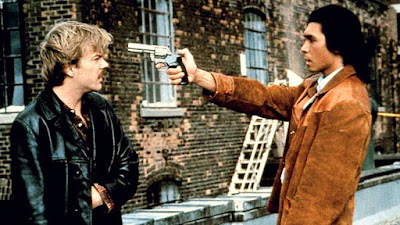 I've been wanting to revisit this late-'80s action since Heath Holland wrote about it a few years back, and this Philadelphia marathon is the perfect opportunity to do so. Kiefer Sutherland plays a Philly cop who teams up with Native American Lou Diamond Phillips to take down a crime boss. The movie is directed by the underrated Jack Sholder, who knows how to put together genre films like this. I'm programming it here because I want to see it again, but also to give us an action break and mix things up a little. 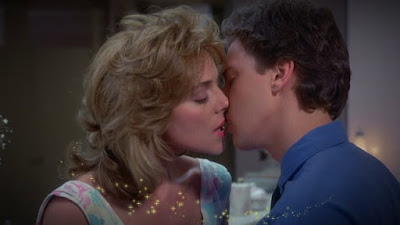 Listen. LISTEN. I will never, ever be able to defend my affection for this movie. It weirdly holds a special place in my heart just for being the first movie to play when the second run theater down the street from my house re-opened in 1987. I wasn't allowed to go see it, of course (my older sister was), but the fact that there was now a movie theater in walking distance from my house was literally life-changing at that age. I have seen Mannequin at least a dozen times since, though, because we recorded it off of HBO and I watched the tape a lot of times. The movie is stupid and silly and completely lends itself to being a musical (an argument I have been making since before every movie was being turned into a musical), and yet I might make a case that it's the best movie about a mannequin that comes to life and falls in love with a lowly department store window dresser as has ever been made. Yes, Mesach Taylor's portrayal of Hollywood is hashtag problematic, but the rest of the cast is having a great time, Andrew McCarthy is his usual bug-eyed amiable self and Kim Cattrall is genuinely great in an impossible part. We're going to get pretty serious and heavy over the next several movies, so let's enjoy the last bit of total nonsense we're going to get until after midnight. 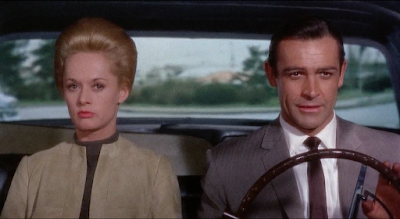 I still haven't seen every Alfred Hitchcock movie. This is one of them. Sometimes, these 24-hour marathons are great for forcing first-time viewings like this: I've blocked out the time so there are no distractions, I can't change my mind about what to watch because the programming is locked in, and the nature of the marathon has me primed to mix new-to-me movies in with the old favorites that populate the rest of the lineup. I honestly know very little about Marnie except that it fines Hitchcock once again collaborating with Tippi Hedren and that Sean Connery plays a Philadelphia publisher. Works for me! 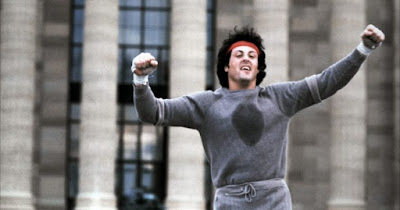 By virtue of the fact that there are far fewer movies set in Philadelphia than, say, New York or Los Angeles, I don't have as much room to experiment or choose off-the-beaten path titles. But I also know that you really shouldn't do a marathon of Philadelphia movies without at least one Rocky. I'm going with the original because I haven't seen it in so long and because it's the best of a series with which I have an on-again, off-again relationship. I suspect the movie will have a special place in my heart on this viewing because the first place Erika insisted we go upon arriving in Philadelphia was to the "Rocky steps." The placement of the movie also follows my usual rule of putting one of the biggest and most crowd-pleasing titles in the Saturday night dinner time slot. 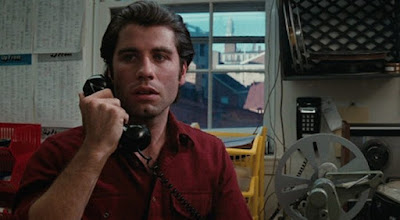 One for them, one for me. Everyone else can have the Rocky franchise; as far as I'm concerned, Blow Out is the greatest Philadelphia movie ever made and Brian De Palma's crowning masterpiece. John Travolta gives his career-best performance as a sound guy working on a cheap horror movie who records an accident one night and gets drawn into a massive conspiracy. Pulling from Antonioni, real-life events (Chappaquiddick) and his own personal obsessions with surveillance for a brilliant thriller that works for devoted De Palma fans as well as those uninterested in his kind of movies. Nancy Allen is wonderful as a prostitute who gets involved, John Lithgow is chilling as a sociopathic killer and the city plays a major role in every bit of the film, particularly the unforgettable climax. This is one of the best movies ever made. 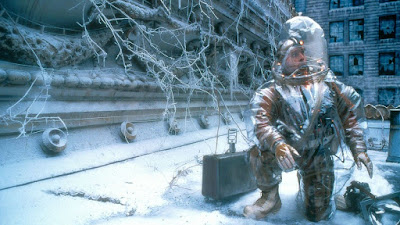 The overall lack of genre movies set in Philly makes it more difficult to get weird overnight, but at least we've got Terry Gilliam's darkly comic time travel dystopia to get us most of the way there. This might be the director's last really great movie, though I'm due for a Fear and Loathing rewatch and have never seen Tideland. Revisiting it a couple of years ago for a podcast with JB reminded me of just how good a movie it is, and I think it will fit well in this midnight slot. It's got the weirdness factor and is cerebral in that college dorm way, perfect for when you're tired and you think you're having deep thoughts but really your brain is lonely sort of working. 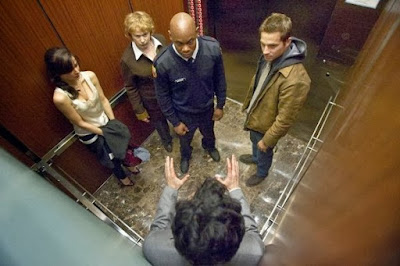 Well, here it is. Sooner or later, I was going to have to program an M. Night Shyamalan movie, as he has become as synonymous with Philadelphia as Scorsese is with New York or John Waters is with Baltimore. And since he tends to work in the genre space, his movies lend themselves to the overnight portion of our marathon. Instead of going with one of his films, I'm going with Devil, the first (and only) Shyamalan-produced film originally marketed as part of a planned series called "The Night Chronicles." Barf! But this movie, a claustrophobic little thriller about a group of people trapped in an elevator, does its best with a simple premise. It has a real old-fashioned B-movie feel, which is why it gets the "Italian nonsense" slot. 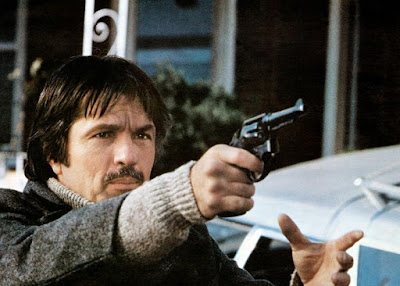 Though almost impossible to come by these days (having never received a DVD release), Fighting Back sounds like one of many ordinary man-turned-vigilante Death Wish rip-offs to hit theaters in the early '80s. Tom Skerritt steps in for Charles Bronson and Philadelphia stands in for Chicago, but otherwise the two movies sound pretty similar. I'm not complaining, of course. I love a good vigilante movie, and this one's directed by the underrated Lewis Teague. It has to be fun, right? Right? 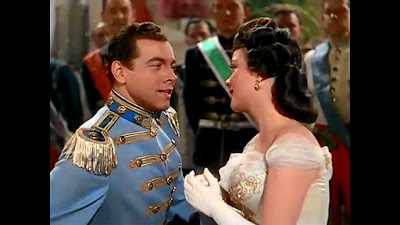 Two movies I've never seen scheduled back to back! This is a Technicolor musical about a truck driver turned opera singer, and I'm hoping it makes for a nice comedown after the overnight section of our marathon. At least this one can be picked up on DVD from Warner Archive, which is more than I can say for some of my other choices for the marathon. 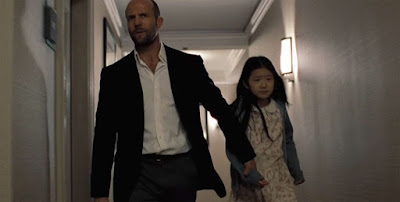 This underrated Jason Statham movie was marketed as being Neeson-adjacent, but actually has more in common with gritty '70s crime thrillers than with some of the slick action movies of today. Statham plays a broken man living on the streets who becomes the protector of a young girl (Catherine Chan) who's wanted by the Chinese triad for her math skills. Sounds really stupid, right? It kind of is, but it's also pretty awesome. The action is solid and there's more attention paid to character and relationships than we usually get from movies like this. Safe is going to wake us up. 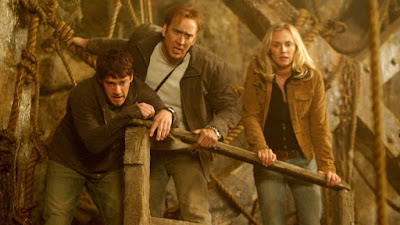 Normally I like to end these marathons with something great -- some kind of big emotional beat on which to wrap up or a title I dearly love so I have something to look forward to during the dark times. In the absence of either type of closer, I've decided to end with something totally brainless but entertaining. This has to be one of the dumbest blockbusters of the last 20 years, but it's dumb in an upbeat way that's void of the cynicism of, say, the Transformers movies, which are just as dumb (dumber) but also actively hate you. National Treasure doesn't hate you. National Treasure is your fun uncle whom you like seeing once a year because he's amusingly full of shit. Plus, we have to close out our Philadelphia marathon on this movie because it's the only movie that teaches us all about the city's rich history of secret clues!

If you've got a suggestion for a 24 Hours of Movie theme you'd like to see, let me know in the comments below!
Posted by Patrick Bromley at 12:00 PM