Off the Shelf: SCALPEL (Blu-ray) 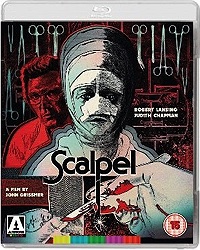 It's the first (and only other) feature from the director of Blood Rage!

Regular visitors to F This Movie! know that the 1987 slasher Blood Rage holds a special place in my heart for being a slasher movie unlike any other. It has a lunatic premise, follows no real set of rules, features wildly inconsistent acting, but also gross and impressive gore effects and is a ton of fun. It's the kind of special horror movie one hopes to stumble upon when sifting through the dozens of undiscovered or underseen entries the genre has to offer. What it doesn't have is remarkable direction. The movie feels quick and cheap and crude, probably because it is all of those things, and I have never come away from it thinking that director John Grissmer did much more than service the wacky material. Imagine my surprise, then, when I finally saw his first movie Scalpel and discovered a film that's not only well-directed, but genuinely quite good. 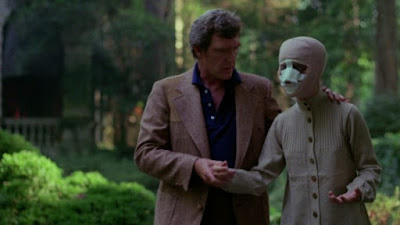 Robert Lansing plays Dr. Phillip Reynolds, a respected plastic surgeon who also happens to be guilty of a murder or two. In addition to bumping off his wife and making it look like an accident, Reynolds kills the boyfriend of his daughter Heather (Judith Chapman) when he stumbles upon the two of them having sex. Heather sees what he does, though, and runs off, disappearing for over a year. In that time, Reynolds' rich father in law dies but leaves none to the good doctor, instead bequeathing his entire $5 million fortune to Heather, who still can't be located. Luck smiles down upon Reynolds (in a twisted way) when a stripper is disfigured and requires facial reconstruction surgery. The doctor operates and turns the woman into the mirror image of his missing daughter so that she can collect on the inheritance and split it with him. But just as the two find themselves becoming romantically involved (the implications of which are...troubling), Heather resurfaces and wants to reconnect with her father. You can see why this is complicated.

With only Blood Rage as a reference point for John Grissmer's work, I was expecting something trashy and exploitative from Scalpel, potentially even cruder than his (decidedly crude) follow-up. Instead, Scalpel is fairly understated, more of a psychological thriller than a visceral horror movie. While the doubling effects used to convince us that Judith Chapman is playing two characters are sometimes clunky and obvious, there are a handful of inspired sequences and shots, too, that are more sophisticated than what we expect from a film of this pedigree (my favorite of which finds on Chapman listening in on a conversation with both characters in plain view of the camera). The premise lends itself to being total trash, and Grissmer doesn't shy away from some of the ickier aspects of the story -- to put it gently, this might make a great double bill with Julie Darling. There are hints of Georges Franju's Eyes Without a Face in terms of the father attempting to reconstruct the daughter's face, but Scalpel is less stylized and effectively creepy (the comparison is unfair, of course, because Eyes is pretty much a masterpiece). Although the execution is a little flat, there are a number of twists that take the movie into more ridiculous and lurid territory, bolstered by the performance by Robert Lansing, who is never less than self-aware as a guy who starts out as a scheming sleaze and only gets worse as the movie goes on. 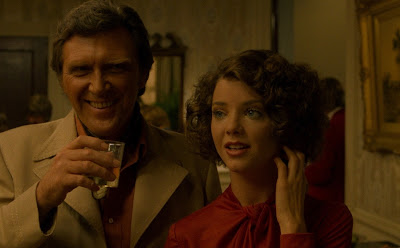 Long unavailable on any format but VHS, Scalpel comes to Blu-ray with a gorgeous new 2K HD transfer from Arrow Video. Two separate versions of the film are available on the disc: while the content is the exact same, the first is supervised by director of photography Edward Lachman and retains his intended yellowish-green color grading to give it more of a Southern Gothic feel. It's a bit of an adjustment at first, but eventually lends the movie a style and atmosphere it wouldn't otherwise have. For proof, you can toggle over to Arrow's alternate graded version of the movie, which removes Lachman's color scheme for a much more natural look. I'm not entirely sure what the intent here is, because it seems like a choice that second-guesses what the director of photography wanted to achieve. Better to include both versions as an option than to just go with their own transfer, I suppose.

Also included are new interviews with Grissmer (as well as an optional director's introduction), star Judith Chapman and cinematographer Lachman, who goes into more detail about his intentions with the film's color grading. Historian Richard Harland Smith contributes a good audio commentary, while a trailer and gallery of production and promotional stills round out a solid collection of bonus features.

Between Blood Rage and now Scalpel, John Grissmer is now two for two as far as I'm concerned, albeit in totally different ways and with two totally different types of movies. This was every bit the pleasant surprise that Blood Rage was when I saw it, even though it's less goofy fun and much more of an honest to god "movie" movie. Arrow's restoration is more or less flawless, rescuing yet another lost movie from obscurity and hopefully exposing it to a whole new audience. This is the kind of film I love to discover courtesy of these cult and niche labels: a little hidden gem of weirdness that doesn't subscribe to convention. The more movies I see, the more I appreciate movies like Scalpel.