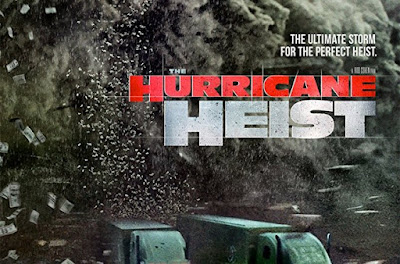 I should start off this review by saying that I went into director Rob Cohen’s latest, The Hurricane Heist, hoping it would be so bad it’s good. In my defense, all signs pointed to it being just that. The premise is dopey, the cast is not what you usually see in a studio movie (can we call Entertainment Studios a “studio” yet?) and the trailer made the film look like a new television series that premieres on Fox after Giants-Cowboys. So, I was surprised to come out of the movie feeling not much of anything. It’s not good, but it’s not embarrassing. It’s stupid, but it’s not funny. It’s not exciting, but it’s competent. I sat there looking everywhere for somewhat ironic nuggets and came up with very little. There’s a 30-second discussion about what brand of peanut butter the hero uses in his PB & J, but that’s about all. It goes like:

The film tells the story of a collection of thieves (led by a pretty non-threatening Ralph Ineson) who plot to steal $600M from the U.S. Treasury under cover of the hurricane of the century. Around to foil their plan are a Treasury agent played by Maggie Grace and a team of estranged (because, of course) brothers: a meteorologist played by Toby Kebbell (with an accent that fits him like a medium suit jacket on an XL man) and a boozy, backup generator repairman played Ryan Kwanten (looking here like a missing Hemsworth brother). The movie kicks into gear almost immediately after a pre-credits flashback straight out of Twister (the hurricane does have a skull face at the end of the storm, so I guess there are laughs occasionally in The Hurricane Heist). We don’t get much character shading to any of the principals. They are there to be action figures to move the plot along. Some effort is made to show that Kebbell is traumatized by the events of the prologue and that Kwanten is a sulking party boy, but they’re competent professionals when brought into action. The henchman all act like they’re on loan from White House Down and First Knight’s Ben Cross as the town sheriff is trying something with his character that works like a gator under a bear bridge because that dog don’t hunt. Maggie Grace on the other hand, we need to discuss.

The action sequences are fine. There’s a lot of quick editing so stuff just happens and you have to process it for a second to make sense of it all. The movie was shot in Bulgaria (doubling for coastal southern) and it looks like rainy Bulgaria. It’s not the usual slick Universal Rob Cohen stuff from the ‘90s and early ‘2000s, but he makes the $35M film appear it costs at least that much. The storm special effects and stunts are actually quite good, skull face storm clouds aside. There is one stunt that bothered me, though (you can see it in the trailer). It’s a scene towards the end where Kebbell and Kwanten are jumping from their car onto an 18-wheeler carrying $200M and Kwanten jumps at a trajectory where he absolutely should have been roadkill but somehow (through trick photography?) makes it enough where Kebbell can grab him. It’s weird. It looks like in a video game where you face plant off a cliff but the “computer” helps you by rolling your ass over a hill to safety.

The best part about The Hurricane Heist surprised me too: it’s Maggie Grace. She’s pretty terrific in this movie as a likeable, capable action hero. She grabs this movie and says it’s hers until she becomes a damsel in distress because fuck this movie a little bit. I was not expecting to be this impressed by her coming off that bizarre role as the 28-year-old teen daughter to Liam Neeson in Taken. Whenever she was on screen in The Hurricane Heist, I was awake. I used to write a column called “Stars That Turned the Corner” but I stopped because though the intention was nice, I thought it seemed condescending, like the actor owed it to me to be a certain way and I had rewarded them for finally doing so. I bring that up just because I think The Hurricane Heist is the movie that has made me on Team Maggie Grace. As for Rob Cohen, I’ll say this. This movie pales by comparison to some of his prime work like Dragon: The Bruce Lee Story, Dragonheart or The Fast and the Furious, but it’s a perfect choice for a future double bill with his own Daylight as the headliner. If that’s not a mild non-recommendation, then I don’t know what is. This movie’s legacy will be a film that someone rents someday from Redbox but can’t return because all the kiosks in the region were lost to a hurricane.
Posted by Patrick Bromley at 5:00 AM