Watch Kevin Geek Out on SNOWPIERCER 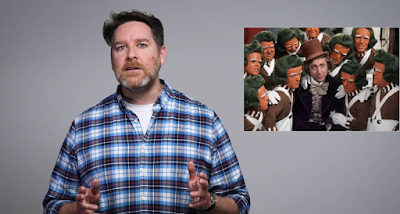 It's a new video series from our friend Kevin Maher!

For those of you who don't already know Kevin Maher, he's a writer and comedian whose regular live show "Kevin Geeks Out" is a New York institution. He and I have become friendly over the last year or so when we bonded over our shared love of Tobe Hooper, and he's a voice I really enjoy and respect in the film community. So when he told me he had created his first-ever video (the first of several, I hope), I wanted to make sure to give it a boost.

In this first video, Kevin talks about Ready Player One and its comparisons to Willy Wonka and the Chocolate Factory by finding another dystopian sci-fi movie that borrows heavily from the children's classic. And it just so happens to be one of my favorite movies of the last few years!

Email ThisBlogThis!Share to TwitterShare to FacebookShare to Pinterest
Labels: kevin geeks out, ready player one, snowpiercer, willy wonka and the chocolate factory