End the month with these excellent streaming picks. 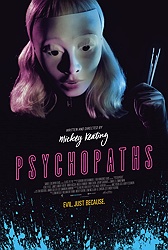 Psychopaths (2017, dir. Mickey Keating) I really, really like Mickey Keating. I've been mixed on a couple of his movies (not Darling, which I loved), but he's so prolific and talented -- and, let's say it, young -- that watching him grow as a filmmaker and discover his voice has been a joy. Plus, he's a delight as a human being: excited and passionate and sweet and, above all, loves, loves, loves movies. He's my kind of human. His latest, Psychopaths, was quietly released at the end of last year and has now quietly appeared on Amazon Prime. I would like to loudly announce that you should watch it. I think it's his best and most ambitious film to date, while recognizing that it's eccentric and maybe an acquired taste. But I love the way that Keating is leaning into the movie's trippy weirdness, and any movie that features Larry Fessenden as a serial killer, Sam Zimmerman as a masked murderer and Ashley Bell in her best performance as one of the titular psychopaths is very much worth your 80 minutes. This was one of my favorite horror movies of last year. (Watch on Amazon Prime Video) Intermission (2003, dir. John Crowley) This Irish comedy drama is one of those ensemble pieces that were very popular in the early 2000s, from Love Actually to Crash. As is often the case with these kinds of films, not every story is as good as every other, but it's all sold by a strong cast of Irish actors, including Colin Farrell, Colm Meany, Shirly Henderson, Kelly Macdonald and Cillian Murphy, among others. It's a pleasant surprise. (Watch on Hulu) 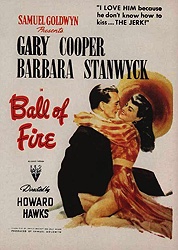 Ball of Fire (1941, dir. Howard Hawks) In many ways the Platonic ideal of the screwball comedy, Ball of Fire features Howard Hawks directing Barbara Stanwyck in a script by Charles Brackett and Billy Wilder. The only stumbling block as far as I'm concerned is that Stanwyck acts opposite Gary Cooper, the squarest square who ever squared the square screen. To be fair to that square, he is really likable in Ball of Fire and all the stuff involving him and his fellow encyclopedia writers is funny, but of course it's Barbara Stanwyck who runs away with the whole thing. They rarely make movie stars like her anymore, and they almost never write dialogue as good as this. (Watch on FilmStruck) 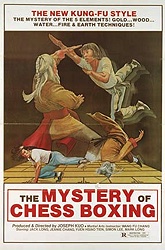 The Mystery of Chess Boxing (1979, dir. Ping Han Chiang) Holy shit. This movie is a gem. I got to see this as part of a kung fu double feature at the Music Box last summer and it blew the roof off the place. Lee Yi Min does a great Jackie Chan approximation (in that he is funny and lovable while kicking much ass) as a man who is desperate to learn kung fu at a prestigious school. In the meantime, the evil Ghost Faced Killer is murdering his way across the country, all leading to a big showdown between Lee, his mentor, and GFK. It's one of the best movie fights I've ever seen. I love this movie and wish it would get a proper Blu-ray release.  (Watch free on Vudu)
Posted by Patrick Bromley at 5:00 AM