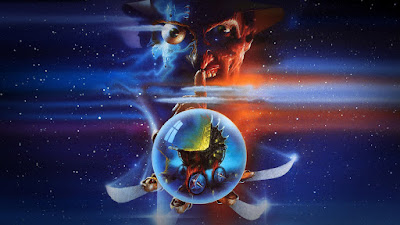 The last 24-hour marathon this month features a bunch of horror movies that not enough people like. 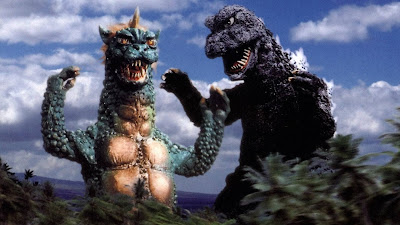 For a 24 hour marathon that's going to be almost entirely inappropriate for my kids, I'd like to start off with something they can watch with me if for no other reason than that they remember what I look like and can tell my story. This might be one of the weirdest and possibly worst of the original run of Godzilla movies because it's basically a highlight reel loosely draped over the framework of a bullied young boy who escapes into his fantasies on Monster Island. The vocal dubbing of Minilla (aka Son of Godzilla) alone makes this movie insane and entertaining, but I mostly like it because of just how much monster action it includes. This would be a fun way to start the day.

I end up repeating myself a lot in these marathon columns, so forgive me for saying something I've probably said before, but programming an all-horror marathon like this one can be tricky because it requires a greater effort to mix tones and sub-genres. With everything falling under the umbrella of "horror," it would be easy for all the movies to start feeling the same. That's why I'm plugging in this underrated sequel from a few years ago that's much more action than it is horror. Adrien Brody is fun playing against type as a mercenary, with the rest of the cast (and Topher Grace) doing variations on the macho badass. Robert Rodriguez gets most of the credit for this unfairly overlooked reboot, but for me it's underrated genre director Nimród Antal who makes the movie work. 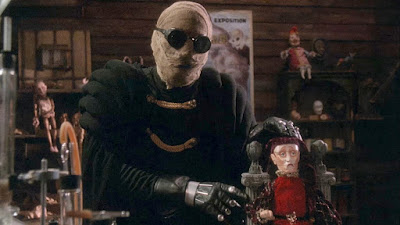 We can't only watch theatrical horror when so much of the genre is made up of DTV entries like this, probably my favorite of the Puppet Master franchise. Yes, it's a re-do of the first movie, but it improves on a lot of the horror elements and Dave Allen (making his directorial debut, RIP) is quite ambitious in the stuff he tries to stage. Also, Charlie Spradling. Obviously a Full Moon joint won't be to everyone's liking, which is why I'm slotting it early enough that it can be forgotten in just a movie or two. I think this one plays even for non-Full Moon fans. 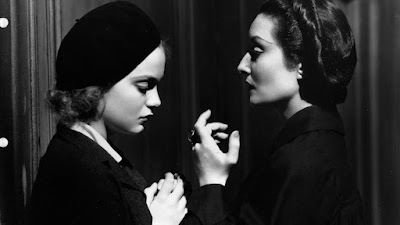 While maybe not a great vampire movie, 1936's Dracula's Daughter is a fascinating and progressive psychosexual character study that's notable for where it lives as part of the original cycle of Universal Monster movies. Gloria Holden plays the titular daughter, who takes after her father when he's slain at the end of Tod Browning's Dracula. These days most famous for some early same-sex eroticism on screen, Dracula's Daughter is half a compelling departure and half middling sequel. As much I would love to play something House of Dracula or Frankenstein Meets the Wolf Man here, I've seen both enough times to want to change things up and watch something just a little less familiar. 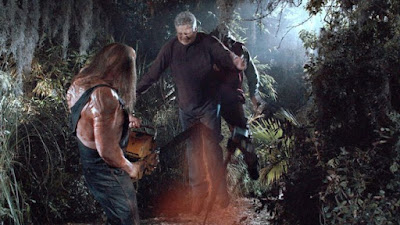 Here's where I'll probably take some shit, because even among Adam Green/Hatchet fans, this is probably the least-loved entry in what is now his slasher quadrilogy. I happen to like this series and have a soft spot for the mean-spirited darkness of this sequel, which, if nothing else, gets bonus points for introducing Danielle Harris as a recast Marybeth, the hero of the Hatchet franchise. A lot of fun cameos, some inspired gore and a more balanced tone make this the entry I revisit more than most. And with as many slashers as we'll probably be watching during this marathon (because sequels), it's important to try and space them out. 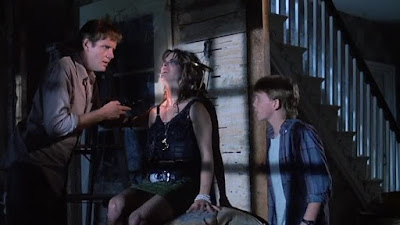 This is an example of me going with my gut on a pick, suspecting that Larry Cohen's horror-comedy sequel to the great Tobe Hooper's stately original Salem's Lot will provide a much-needed feeling of fun at this point in the marathon. Pretty much a sequel in name only, Return casts Cohen regular Michael Moriarty as an anthropologist who brings his son back to his hometown only to discover it has been entirely taken over by vampires. Cohen's usual eccentricities make the movie fun even before Sam Fuller shows up as a Nazi hunter, at which point the sequel becomes gloriously weird. 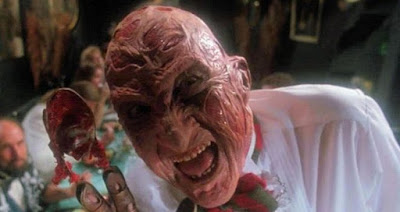 Of all the big franchise sequels I could have programmed in the Prime Time pizza slot, I'm going with The Dream Child. Why? Well, because I've championed my favorite underrated entries in the Halloween and Friday the 13th series enough times on this site, and because outside of New Nightmare, which has its fans, it's maybe the only movie in the franchise I consider "underappreciated." It's a mess, yes, but an ambitious and often darkly beautiful mess made under impossible conditions. This one also gets what Adam Riske has dubbed the "convention bump" because we met a number of the stars and sat in on their panels at last year's Flashback and they all seem like such nice people that it makes me want to like this movie. And, dammit, I do. 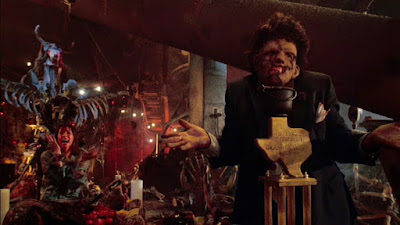 This should surprise absolutely no one. There's nothing I can say about TCM 2 that I haven't already said in the articles I've written or on my recent commentary for the movie. It's one of my favorite sequels ever and one of my favorite horror movies period, and has thankfully begun getting more appreciation in recent years as horror fans are opening their minds about what Tobe Hooper wanted to achieve with this entry. This is basically the centerpiece around which the entire rest of the marathon is built. 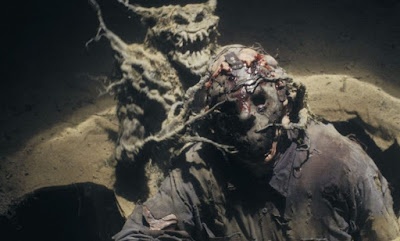 Yes, this is my Dream Child of the Friday the 13th series: an entry I enjoy that almost no horror fans do, even devotees of the franchise. I know the complaint is "no Jason," but it's almost like those detractors ignore the existence of Halloween III: Season of the Witch. Yes, the idea of Jason being some weird demon whose soul can be passed along from person to person (it's The Hidden) is a stupid idea, but please don't criticize the idea in the same breath in which you champion Freddy vs Jason. I like the energy of Adam Marcus' direction and the outrageousness of the gore, especially in the unrated cut -- which, for some reason, has never been released on Blu-ray. As a late night movie, I think this will really play. 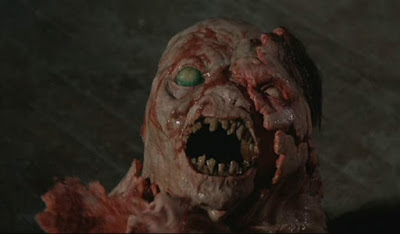 I just watched this last October for the first time (it remains the only Amityville movie I've seen outside of the remake) and completely flipped out for it. More an Exorcist rip-off than a haunted house movie, The Possession is weird and sleazy and completely demented. It's also genuinely intense at times and contains one of the more horrifying sequences I've seen in a movie in a while. While not technically Italian horror, it basically is -- the movie just happens to have been made in America. Switch out the actors (including Burt Young and an early Diane Franklin performance) and throw in some dubbing and you've got yourself some true Italian weirdness. 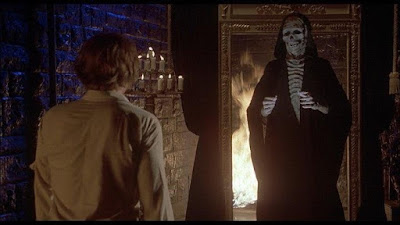 This might be cheating a little, seeing as Dario Argento's Inferno isn't technically a sequel, though it is the second installment in the director's "Three Mothers" trilogy and therefore counts as far as I'm concerned. One of the director's first truly abstract films, Inferno is all about color and mood and moments -- a less successful Suspira, but a movie that still has a lot going for it. The mirror gag (seen above), supposedly conceived and executed by an uncredited Mario Bava, is an all-timer. 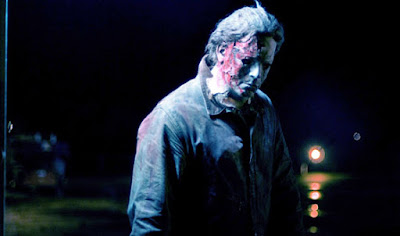 It's been interesting to see the needle slowly move on Rob Zombie's career as a filmmaker. Long one of the most hated figures in the genre, popular opinion seems to have shifted ever so gradually on Zombie's filmography over the years, to the point that an announcement that production had started on his latest effort (3 from Hell), it was met with quite a bit of celebration in the horror community. His remake of Halloween remains polarizing, but his Halloween II has been reassessed and appreciated much more now than it was back in 2009 when it was as detested as the rest of his work. I have always been a fan, and while it's an incredibly unpleasant watch, I admire the way he truly tries to continue the story of the first movie and considers the impact those events had on every character. The dialogue is rough as always, but most of the performances are strong (in particular Danielle Harris and Brad Dourif), and the movie is brutal and haunting in a way that most horror sequels aren't willing to be. 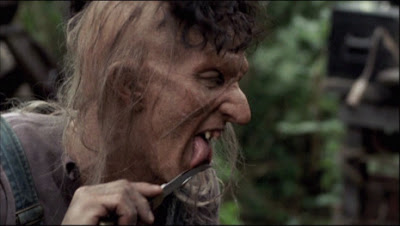 The last few hours have been pretty dark and grim, so let's wake ourselves up with some bloody fun courtesy of Joe Lynch. The first Wrong Turn is fine as far as that early 2000s wave of '70s-inspired horror goes, but Wrong Turn 2 is a much better film and the only movie in the series for which I have any real use. Lynch turns to the '80s for his inspirations, so the result is a movie that's funny without being explicitly jokey and which celebrates crazy amounts of practical gore. Plus, Henry Rollins is a  total blast as an ex-military guy leading a bunch of would-be reality TV stars in the wilderness. This is the pick me up we need going into the home stretch. 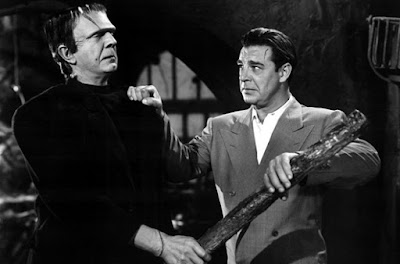 Ok, I know I said I probably wasn't going to program this one but I just can't help it. Still my favorite of the "monster bash" wave that Universal put out to keep their franchises alive, this is a movie that practically limped to screen in its current form (if you want to know more about what it was supposed to be, just ask JB) but which is so goofy and fun that I can't help but love it. As a kid obsessively reading and re-reading the Crestwood Monster Movie books at my public library, this was one of my favorites and a book I memorized long before I ever got the chance to see the actual film. 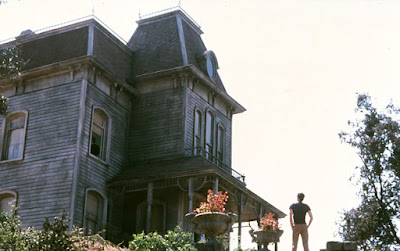 This was a tough marathon to close out, because the horror sequels that have the right energy for a final film -- like, say, Army of Darkness -- aren't underappreciated. They're plenty appreciated. Even Psycho II, my pick for the final film, is a lot more appreciated and revered now than it was years ago when I first starting talking it up. I know there will always be some movie fans who feel it's blasphemous to sequelize Psycho, but if you're going to do it at all, this is a pretty good way to do it. Tom Holland's script is both a great character study and a fun thriller, Richard Franklin's direction is classy, and Anthony Perkins is nothing short of brilliant as he revisits Norman Bates. The idea of wrapping up these 24 hours with what transpires in the final moments of Psycho II is just too good to resist.
Posted by Patrick Bromley at 12:00 PM