Ladies and gentlemen, we have reached a new low for the movies of 1976. No matter how cheap, how poorly acted, or how shoddily crafted some of the flicks from our spotlight year have been, none of them have been or will be as bad as Drive-In Massacre. This ultra-low budget horror movie sets the bar so low that it makes other horror movies look like masterpieces. Yet, it further supports my thesis that 1976 was a hotbed of creativity with a very diverse selection of movies that each had a unique feel that reflected their filmmakers’ individual style. Sometimes, as in the case of Drive-In Massacre, that style is trash, but trash can still have something to offer a hungry movie fan.

Shot in four days on a budget of 30,000 dollars (almost none of which seems to be on the screen), Drive-In Massacre depicts a drive-in movie theater in Southern California that is being terrorized by a sword-wielding maniac. Two cops that look almost identical are investigating the murders, and it’s through them that we meet our very small list of suspects. That’s about the whole of it. Couples drive in, start to pork, and get killed in gruesome ways. The cops say “we’ve got another one!” Then there’s twenty minutes of police procedural until the next murder. There are really only three suspects: a mentally-handicapped guy who used to work at a carnival and looks like Bing Crosby’s third cousin, a pervy peeping tom who likes to watch couples making out through their steamy windows, and the greedy, grumpy manager of the drive-in theater who is more concerned with profits than the body count. He might as well say “You yell ‘shark,’ we’ve got a panic on our hands on the 4th of July!” 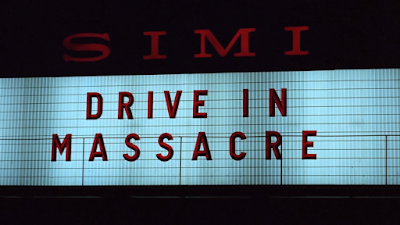 Everyone involved in this movie, behind and in front of the camera, is a novice, but here’s the thing (I bet you know what’s coming): Drive-In Massacre us ultimately so goofy and so amateurishly done that I can’t help but enjoy myself when I watch it. These days movies are bad in completely different ways than they used to be. Now we can look at a movie and point out a weak script, or bad performances, or poor casting. We can detect studio interference, dodgy CGI, and even when executives have meddled in the day-to-day creative process. But this movie is bad in an approachably incompetent way. It was “written” by John F. Goff (he’s one of the cops) and George “Buck” Flower (who is also in the movie in one of its best moments), both of whom had come out of the heavy exploitation and erotica scene of the early seventies. Both men had only just begun to write their own stories the previous year, and this was one of their first attempts at a REAL movie. It was directed by Stu Segall, a producer and director who started in low cinema and stayed there for thirty years. In fact, all of these guys spent most of their careers in sleaze and B-films. The cinematographer of this movie worked primarily in porn. Tellingly, the final film that he lensed was called The Temple of Poon. 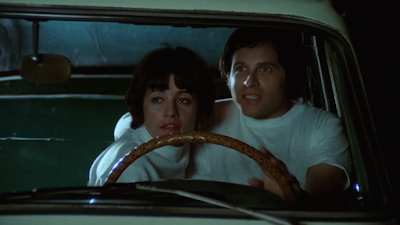 But for all its shortcomings, this is an early example of the traditional American slasher film that would clog video store shelves for much of the 1980s. It’s not a Giallo and it’s not a psychological thriller. It’s 100 percent a predecessor of the Friday the 13th formula (although this movie makes Friday the 13th look like Lawrence of Arabia) of naughty people getting dismembered in creative ways. I’m not suggesting it’s the first, because it’s absolutely not; there are at least a dozen horror films that pre-date this one and still have the same formula, but for a slasher horror fan like myself, the hallmarks of the genre all over this thing. Because of this and because of all the low-budget cheese, Drive-In Massacre has somehow found quite a bit of acceptance from the cult horror community. I’m surprised it doesn’t have its own Fright Rags collection.

Another thing that makes this movie slightly more notable is its setting. The drive-in theater had really seen its peak in popularity during the sixties. But the time of this movie, drive-ins were in serious decline. Due to the energy crisis of the mid-seventies, cars were getting smaller and more economical, meaning automobiles weren’t going to be a destination for very much longer. Though we still have a few drive-in theaters around today, the seventies was sort of the end of the line for them as being a popular, viable way to watch movies, though it amazes me that they ever were. The theater in this movie looks like a run-down dump, and I have to imagine that’s the case for most drive-ins by this period. It almost seems like the serial killer was the least of this place’s problems. Spoilers: the real killer is gonorrhea. 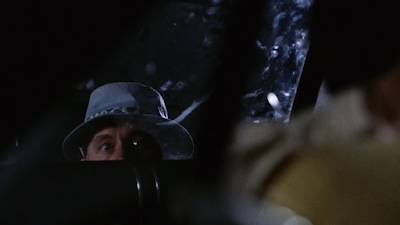 Also, this movie relies on a lot of gimmicks and advertising gags. A look at the poster reveals that Drive-In Massacre was filmed entirely in “bloodcurdling GORE-COLOR” which I guess is somehow different from just regular color. The poster also bears this warning: “Drive-in Massacre has been deemed by an independent film board to be too terrifying for viewing by the average theater patron. For this reason, it is suggested that those of you with severe emotional disorders or chronic coronary disfunction NOT see this movie. The risk is entirely yours.” To me, this feels like a holdover from the William Castle days of the fifties and sixties when movies were filmed in “smell-o-vision” and featured theater gimmicks like jumping skeletons or electric chairs. And yes, this movie has a gimmick ending, and it does feel very corny. But I think this film is also near the tail-end of that phenomenon as well and serves as a very late example of the kind of schlock filmmaking we’re talking about. I know Faces of Death would use the same “watch at your own risk” warning a couple of years later, but it seems that, by and large, the thrill of seeing something scary in an open place like a drive-in theater was not long for this world by the time this movie hit theater screens. Soon this would all be on video and cine-fans could watch this stuff from the comfort of their couch, meaning that drive-ins country-wide would sink back into the crude cesspool from whence they sprang. So there’s our requisite “time and place.” 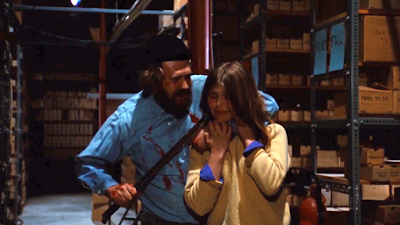 I’m not exactly recommending Drive-In Massacre. It’s abjectly terrible in almost every conventional sense, a true Z-grade picture if there ever was one. The acting is awful. There’s actually a scene where one of the cops starts to deliver a line, fumbles it, and starts over. But, for me, at least, it manages to be bad in an interesting way, not in the numbing way of modern failed blockbusters. This may be the worst of the worst for 1976, but it somehow, incredibly, is still interesting and engaging, even in failure. That’s what makes these movies so unique to me and why I find 1976 to be such a fascinating year. The seventies were the decade of stripped-down, hands-on filmmaking. Almost every single movie we’ve covered during this series could only have been made at the time when it was, and here’s another one to add to that list. Drive-In Massacre is a turd, but it’s a turd that reflects the multicolored tapestry of cinema in a very goofy, gory way.