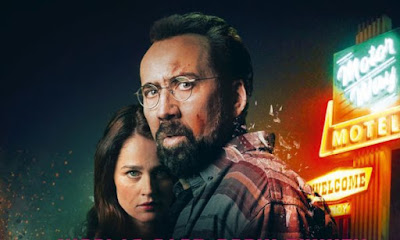 Nicolas Cage is watching you get it on.

In the years since his breakthrough feature River’s Edge (1986), Tim Hunter has made his way as a reliable journeyman television director specializing in darker-edged fare like Homicide: Life on the Streets, Breaking Bad, Hannibal, and the original run of Twin Peaks. That last one is important when considering his new feature, Looking Glass, a DTV Nicolas Cage vehicle with an arch and idiosyncratic — in fact, plainly Lynchian — edge. It’s cold and surreal, pairing Heartland Americana with erotic and paranoid terrors hidden behind locked doors. It’s filled with lonely men and beautiful women, endless desert highways and gangly night-crawling drifters. The droning and haunted soundtrack plainly evokes Angelo Badalamenti, and (as if to hammer the point home so hard we can’t miss it) the bright and swooping credits are styled in the same signature typeface that David Lynch used in Fire Walk with Me and Cage’s own Wild at Heart. What, then, do we make of Looking Glass? Do we judge it as a thriller on its own merits? As an homage to Lynch? Something in between? The question is answered for us, in the end, because for all its focus on style and atmosphere, Looking Glass’ unwillingness to push limits prevents it from being as bizarre or memorable as the universe it emulates. 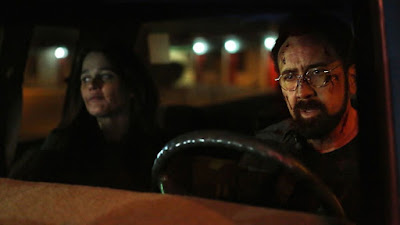 Ray (Cage) and his wife Maggie (The Craft and Empire Records’ Robin Tunney) are still reeling from the accidental death of their young daughter. Hoping to start over, the couple purchases a roadside motel from the enigmatic Ben (Bill Bolender), who leaves the key under the doormat before fleeing town in a hurry. The quiet motel life suits the couple at first — Ray makes friends with boisterous trucker Tommy (Ernie Lively) and local sheriff Howard (Buffy the Vampire Slayer’s premier floppy-haired douche, Marc Blucas) while Maggie looks into adoption opportunities — but Ray’s demons get the best of him when he discovers a hidden maintenance passage that ends with a two-way mirror into Room 10, a favorite of the regular patrons. Over the next few nights, he spies on Tommy’s dalliances with local girls and the lesbian S&M adventures of a mysterious blonde (Kassia Conway). But sexy fun time ends when Ray learns that a girl was murdered on his property just before he took ownership, and a series of strange pranks perpetrated by neighborhood hooligans (blood on the windows, a dead pig in the swimming pool) make him suspect that the danger may not have yet passed. As his marriage deteriorates and he slips further into paranoid madness, Ray must stop the mysterious killer before he becomes the next victim. 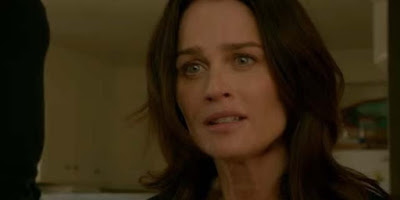 All this makes Looking Glass sound like a Hitchcockian thriller, Rear Window by way of Blue Velvet. And while there are little signifiers here and there (1950s iconography, rusty old men with peculiar speech patters, blonde/brunette dichotomies, Women in Trouble), the film is ultimately too tame to earn the comparison. Cage delivers a predictably earnest and strange performance (Camp Cage fans should look out for a hilarious “Did you do it?!” “Did I do it?!” back and forth between Ray and Howard), and Tunney does her best with the little characterization she gets (her culpability in their daughter’s death due to her drug addiction is breezed past without development or exploration), but neither grounds the film enough to grant the happenings around them their due peculiarity. Frankly, Looking Glass lacks the balls to get weird with it. Ray is framed as a dirty sex pervert with fidelity issues, but aside from a fantasy about the cleaning woman and some voyeuristic peeping (itself very PG-13, with Cage’s closeups recalling Norman Bates’ suggested masturbation in Psycho), very little of that characterization amounts to anything of substance. The “floating pig” scene — apparently meant to be the film’s shocking dramatic crescendo — ends with Ray burning the carcass in the desert before having a beer and falling asleep. Shrug. 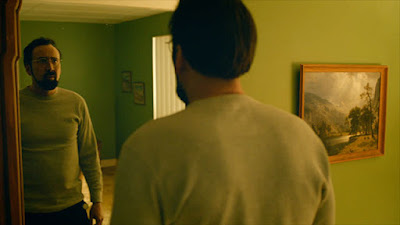 In fact, Looking Glass’ real victory might be that it provides David Lynch’s detractors — those critics who accuse him of empty exploitation and weirdness in service of nothing more than itself — with an example of what a surrealist thriller actually looks like when it’s done incorrectly. Take Blucas’ Howard, for instance: His aww-shucks good looks and folksy charm is meant to contrast with — spoiler alert, I guess — his larger role in the deadly conspiracy. This is his town, we expect him to say, and his helpful curiosity in Ray and Maggie’s affairs will turn out to be a feint with sinister consequences. But since Howard incessantly badgers Ray about the disappeared Ben’s possible location from the moment we meet him (when he’s not busy hitting on Maggie), Ray is never comfortable with him. And since he’s the only named character with any quirks or development (Tommy fades from the narrative pretty early on), there’s never any ambiguity about what’s going on. Neither Conway’s mysterious blonde nor her companion (Jacque Gray as “Jessica in Room 6”) are of any real help, either. While Lynch’s oddball characters add depth and texture, these only beg more questions. Looking Glass is missing a soul, presenting surface-level examples of loss, addiction, shame, and grief but missing opportunities to connect and develop them at nearly every turn. It’s a shiny gift box with nothing inside, a burnt pig carcass with no meat left on its bones.