20 Years Later: MY GIANT/CITY OF ANGELS 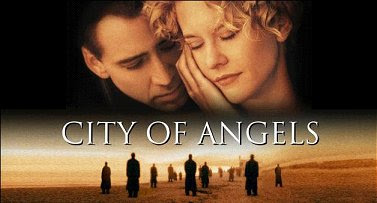 April 10, 1998 was a crazy day at the movies. Debuting in theaters were The Player’s Club (never saw it), Species II (it stinks), The Odd Couple II (again, never took the dive) and two films I’ll cover today: the popular Nicolas Cage-Meg Ryan romantic drama City of Angels and the easily forgotten Billy Crystal-Gheorghe Muresan buddy flick My Giant. I don’t know why, but once I saw that My Giant was among the list of options to write about for this month, I really wanted to re-watch it. It’s an interesting experience to revisit this movie 20 years later because none of it feels modern. All its marketable elements are no longer marketable elements. Maybe they weren’t in 1998 either, because this movie tanked at the box office. It’s also a movie where I can’t tell if Billy Crystal developed it to honor his Princess Bride co-star, Andre the Giant, or is using his memory to exploit another plus-sized athlete: the 7’7” former NBA center Gheorghe Muresan. Based on the final product, I’m not sure Crystal even knows what he wanted to accomplish. 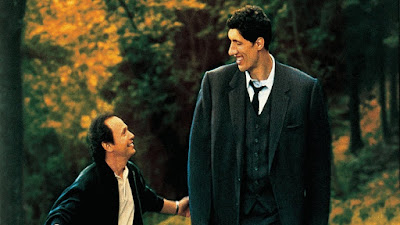 The movie is not terrible. It starts out well enough, with Crystal’s agent character on location in Romania while a different client (played by Rider Strong!) is filming a David vs. Goliath style medieval fantasy epic. Crystal winds up in a car accident and is rescued by Muresan’s character, a naïve but sweet man who lives in a monastery to hide from the locals’ jeers. The early getting-to-know-you stuff is the best part of the movie. Crystal and Muresan have a pleasant, if rarely funny, repartee and Muresan is an engaging screen presence. If he weren’t so game as a performer, the movie would have been very uncomfortable.

Once the pair leave Romania, under the pretense of finding Muresan’s long lost love but really to take him to Las Vegas for a film role, My Giant takes on more unseemly qualities. Those never gel with the sentimental tone of the film so the whole thing feels condescending. For example, (SPOILER), the object of Muresan’s affections wants nothing to do with him, so Crystal lies and deceives Muresan to protect his feelings. In the context of the movie, it’s understandable because Muresan is fragile and the truth would hurt him more than the lie, but why not make a movie where Muresan’s character isn’t emotionally stunted and can be treated like an adult? He has very little agency in the decisions being made for him and that made me mad. Hello! Filmmakers! He’s tall, not stupid, fuckos! (Sigh) Maybe this movie is terrible.

This was near the end of the “Billy Crystal as the lead in your live-action comedy” run, with a supporting turn in Analyze This up next. It’s not unusual, as most comedic actors have prime years and then recede from the spotlight. Crystal has fared better than most with voice acting and Academy Awards hosting gigs to fall back on. It’s clear in My Giant that his brand of shtick was old hat. The movie feels lazy, as if Crystal thought the pairing of short him and very tall Muresan (plus a self-deprecating cameo from Steven Seagal that no longer works because we know who Steven Seagal is better now than in 1998) is inherently hilarious. It’s also gets sanctimonious about exploiting Muresan’s character on-screen (i.e. he’s a big, scary giant so let’s make money off him) but it is doing that very same thing off-screen. What makes it even more suspect is Muresan was never a superstar. So why him? I think we all know why, and the challenge should be on the filmmakers to reveal more other than that he seems like a nice guy with a different look. At least in Space Jam they cast Michael Jordan, the most popular NBA superstar of all-time, to play a basketball player. That makes sense. 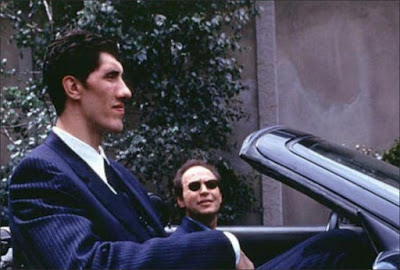 My Giant is just a strange movie. It’s an off-putting game of putting Gheorghe Muresan through the ringer (e.g. his character’s life expectancy is short due to his size) to provoke audience sympathy. If the film closed with Muresan’s character’s life improving and him finding happiness, I would be more in its corner. Instead, the film casts him off in a flip manner because the core of the story is revealed to be how he was a vessel to improve the life of Billy Crystal’s character. Fuck that! To call a movie My Giant and not have the awareness to turn it into the giant’s story reveals the unfortunate vanity of its authors. My Giant’s legacy is as the B-picture on a “My Sacrifice ‘98” double bill with Simon Birch. At least director Michael Lehmann (Heathers) made 40 Days and 40 Nights next. I once watched that movie four days in a row.

Not as good as 40 Days and 40 Nights is director Brad Siberling’s City of Angels. I used to like this movie and I was looking forward to this revisit, but it didn’t work for me on this recent viewing. There are elements I still enjoy, but when it’s bad, it’s bad. In 2018, City of Angels felt much to me like a drama series that would air on NBC after This Is Us. That’s not a knock on This Is Us, btw. That show is okay in my book. My point is that the plot of City of Angels feels like the kind of non-religious/spiritual inspirational television that is designed specifically to wring tears from viewers in an attempt at second-hand catharsis.

In City of Angels, Nicolas Cage plays an angel named Seth who falls in love with a heart surgeon named Maggie (played by Meg Ryan) and it causes him to contemplate abandoning his celestial existence to become human and spend his life with Maggie. I like this conceptually. It’s romantic and lends itself to some fun scenes between Cage and another man named Nathaniel (Dennis Franz) who may have a similar secret of his own. Dennis Franz is playing against type in City of Angels, and my favorite television actor of all time brings it and steals every scene. He and Cage’s interplay perks up the movie. 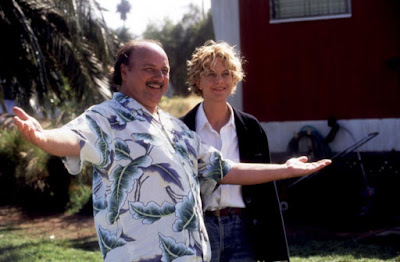 Also very good is Meg Ryan. I’ve been a fan of hers for many years because she’s effortlessly good in romantic comedies, but in this watch of City of Angels I found a new appreciation: her face. I love that you can read her every emotion from non-verbal cues. She’s never an actor that needs to overexplain big feelings; she can do that by a smile or frown. Ryan’s work in City of Angels is subtle and expressive and, as I said, if City of Angels were its own series I would be interested in her character and her life as a heart surgeon suddenly beginning to doubt herself for the first time.

The problem is the romantic pairing of Cage and Ryan, who do not have good chemistry together. That’s where the movie starts to fall apart for me. When the pair are on screen together, their scenes range from ineffectual to confusing. She is somehow not talking to him like he’s a man or an angel and he comes across as a stalker or some male delusion of what a woman would want from a man during courtship. The film is on shaky ground as we approach the final act, which I will now spoil. If you haven’t seen City of Angels and care what happens, you might want to stop reading. (SPOILER) City of Angels has a truly awful last act. Seth decides to leap (literally off a building) and become a man so he can be in a real relationship with Maggie. He tracks her down to her lake house in Tahoe. He arrives and her doorstep and they make love for the first time by the fireplace. All is well and good. The next morning, Seth takes a shower and Maggie goes off to pick up fruit without him (but for him and her) at a nearby market. On her way back, she isn’t paying attention and crashes her bicycle into a log truck. Maggie dies and Seth grows depressed because the woman he gave up being an angel for is dead. Now he’s sad all the time, like a human would be. While grieving, he speaks to his angel buddy (played by Andre Braugher) who kinda consoles him but not really. Seth then jumps into the ocean for the first time and has a cathartic experience, presumably restoring a sliver of hope that he can live a happy life as a human. Ok, here are my beefs with this last act:

• Why does Seth hitchhike to Tahoe instead of asking Nathaniel, who understands Seth’s situation, for a lift?

• Who, during a romantic getaway, wouldn’t say “Hey Seth, come with me to the market. I’ll wait till after you take your shower so we can go together.” Maggie. That’s who.

• Why is Maggie riding her bike like an asshole, sticking her arms out and looking up to the sky instead of paying attention?

• Why doesn’t she veer or brake when she sees the truck? She had time!

• I’ve heard of irony, but Maggie dying the day after Seth gives up being an angel to be with her is fucking ridiculous. Also, what theme/purpose does it serve for this story that she dies? Am I supposed to be sad or relieved that Seth will now know crippling fucking agony of losing the love of his life AFTER A SINGLE DAY with her?

• Why doesn’t Andre Braugher, seeing Cage is super depressed now, not give up being an angel too to be with his friend and go through life together so he’s not forever miserable? They’ve presumably been angels for a long time and were besties.

• Does ending the movie with Seth renewed in the ocean make any sense or is it the movie just giving up? The same sadness will be right there once he gets on the beach, right? Also, he and Maggie weren’t into each other for that long. Is he going to try to meet someone new now? Why is he still staying at Maggie’s house? Doesn’t she have family? If so, what do they think of all this? Doesn’t Seth need to get a job? What the fuck! He was an angel and now he has to work and not have a girlfriend?

I will say this though, even 20 years later, the song “Uninvited” by Alanis Morrissette is unbelievable. If you aren’t moved by “Uninvited,” then you might not have a soul. Sorry. I don’t make the rules.
Posted by Patrick Bromley at 12:00 PM