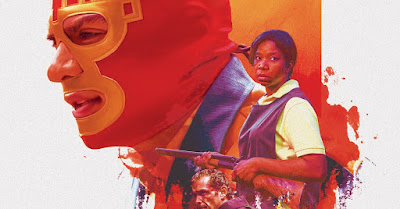 The breakout hit of every genre festival is finally out!

It's unavoidable that Ryan Prows' new film Lowlife will get compared to Quentin Tarantino's watershed Pulp Fiction. Like Pulp, Lowlife is a film told in a series of interconnected short stories, all centering around a group of outsiders and would-be criminals, often punctuated by shocking moments of violence. These comparisons will be made because of surface similarities and because a large number of writers and critics are unoriginal. At least Lowlife comes by the comparisons honestly, not because it feels like some mid-'90s imitation but because it's a terrific movie, well made and unpredictable, and announces the arrival of a genuinely exciting new filmmaker. 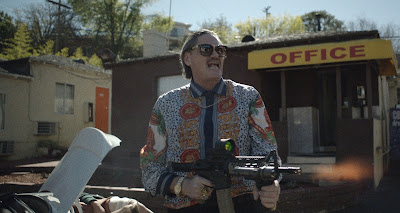 Four stories make up Lowlife, each of them loosely connected until they're directly connected. The first finds a luchador wrestler who goes only by the name El Monstruo (Ricardo Adam Zarate) and is prone to rage blackouts; he gives his niece a very special quinceanera gift before trying to get in touch with his pregnant wife, whom he hopes is carrying the baby that will continue his family legacy. The second story centers on Crystal (Nicki Micheaux), a hotel owner trying to get a new kidney for her husband from a very unusual source. Story three finds a pair of inept criminals -- one of whom is fresh out of prison and branded with a swastika tattoo across his face -- tasked with kidnapping Monstruo's pregnant wife. Finally, in story four, the threads and the characters more or less come together, all united by their relationship to Teddy (Mark Burnham), the criminal pulling all of the strings. 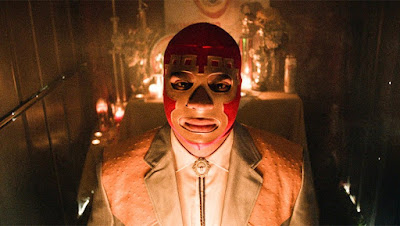 A huge festival darling since premiering at Fantasia Fest last year (where it picked up the Audience Award, the first of several for the film), Lowlife is equal parts tragic, brutally funny, and shockingly violent. It's not a movie for the squeamish, though it can't be described as a typical gross-out bloodbath (once you get past the opening credits, that is). The characters make bad choices and do stupid things, but they don't exist to be laughed at or mocked. Even the character that comes closest -- because he has a swastika tattooed on his face -- has some redemptive qualities because he's self-aware and even the tattoo has some sad backstory. All of the characters are compelling, actually, whether it's it's charismatic creep Teddy, heartbreaking Crystal, or the great El Monstruo, easily my favorite movie character of 2018 so far. I want to say I'd love for him to have his own movie, but I also love the very specific way Prows uses him here. There's just enough El Monstruo to make me want way more. 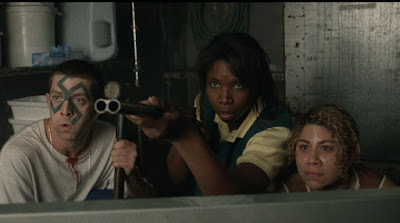 Indie film has been so saturated with crime films -- and, more specifically, "inept" crime movies -- in the 20+ years since Pulp Fiction that it's super rare for one to stand out. Lowlife stands out. It's smart, it's skillful, it's nasty but it's not nihilistic. It has a cast of characters who are colorful while not obnoxiously overwritten or eccentric, which is some kind of miracle when one of them is a former wrestler wearing a mask for the entirety of the film. Lowlife is a strong movie that I think everyone should see, but El Monstruo makes it a movie everyone has to see.

Lowlife is out in limited release and on iTunes/VOD from IFC Midnight.