Travel back with me to 1985… does this watershed horror film still hold up more than thirty years later?

I can still remember seeing Re-Animator on opening night in 1985 after reading Dann Gire’s enthusiastic review in The Daily Herald that afternoon. To say I was not fully prepared for what I was about to see would be an understatement. To say that the rest of the audience that night was unprepared… well, except for a few walkouts, it’s still the most fun I’ve seen an audience having during a movie, with the possible exception of the opening night of Halloween seven years earlier. 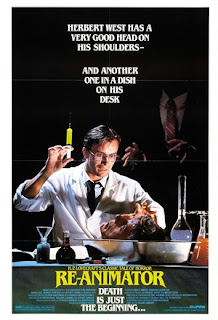 I took the release of Arrow Video’s new feature-packed Blu-ray as an opportunity to revisit the film, which I had not revisited in the last three decades. I was hoping that it would hold up… that it wouldn’t need a shot of neon-green reagent injected into its cranium in order to live again… that, even after 33 years, the movie’s glistening intestines would still burst forth and wrap around the viewer’s attention… well, you know. It does hold up, magnificently. Though its low-budget origins sometimes show, I have seen morgue-loads of gore and practical effects in my time, but I cannot think of a single film that has ever topped Re-Animator for sheer fun goo. 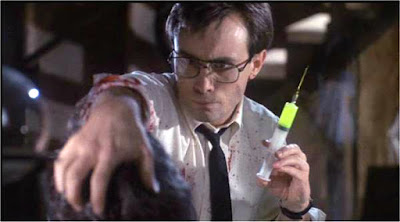 West rouses Cain to anger and then admiration by killing Cain’s cat Rufus, and then immediately bringing it back to life with a “re-animating reagent” he has concocted. The two sneak into the school’s morgue to re-animate a human corpse, but things do not go as planned. Meanwhile, Dr. Carl Hill (David Gale, in the performance of the film) learns about West’s breakthrough and tries to steal it for himself. One might say that Hill gets so wrapped up in this thievery that he loses his head over West’s discovery… 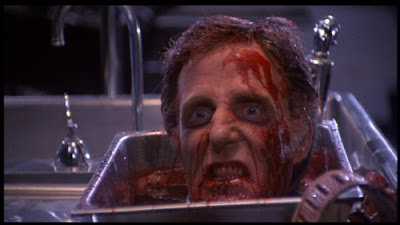 The performances in the film are all terrific. Director Stuart Gordon, who had previously helmed Chicago’s famous Organic Theater Company, had a terrific talent for casting and coaxing outrageous performances from actors. In the “Making Of” featurette included on the disc, Bruce Abbott recalls Gordon on set “never once asking any of the actors to take it DOWN a notch.” This leads to delightful, outrageous performances from all of the principals, including beyond-the-call-of-duty nudity and hysterical screaming from Barbara Crampton (who always introduces Re-Animator as “my mother’s favorite of all my films”), over-the-top mugging from Robert Sampson (who admits it’s the best film of his career and the one he will be remembered for), commit-to-the bit intensity from Jeffrey Combs (who Gordon points out is the film’s villain until halfway though, when he suddenly becomes the film’s hero), and David Gale, whose performance as Dr. Carl Hill proves once and for all that an actor’s greatest tool is his face. With this stellar cast of lunatics acting beside him, we can forgive Bruce Abbott’s somewhat lesser performance. Of course, it might just be that he is being asked to play straight man to the Marx Brothers of Grand Guignol.

TANGENT: A24 Studios movie pitch idea: The Marx Brothers in A Night at the Grand Guignol!

The special effects in the film are still impressive. The most entertaining part of the disc’s “Making Of” featurette is hearing Tony Doublin explain the relatively simple ways the special effects crew solved some complex problems. I learned that the film’s neon green reagent was simply the contents of many glow sticks activated and then poured into bottles, beakers, and syringes. Doublin continually explains how they achieved an amazing effect, then chuckles and says, “It’s very simple, but it’s a great gag.” One of my favorites involves a low budget solution to an on-camera amputation. The similarly low-budget Monty Python and the Holy Grail solved this problem in the exact same way! 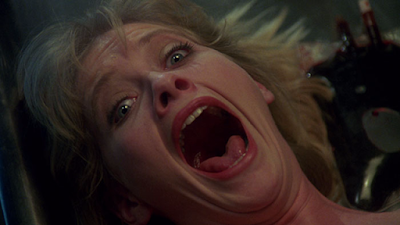 While Arrow Video is to be congratulated for the wealth of special features on the new disc, I found there to be a bit of redundancy. The best extras are clearly the extended scenes, which allow us to see the footage that was cut back into the film for its “R-rated” home video iteration. Like the film itself, perhaps too much of a good thing is preferable to too little… but be prepared for three separate commentary tracks, the feature-length Anchor Bay documentary, and separate filmed interviews with director Stuart Gordon (between the commentary tracks, the other extras, and this interview, he tells the same story about the film’s financing five or six times), producer Brian Yuzna, actor Barbara Crampton, screenwriter Dennis Paoli, former Fangoria editor-in-chief Tony Timpone, and“composer” Richard Band.

I do have a bone to pick with the score. From the first time I saw the film, I wondered why the damn music sounds so much like Bernard Herrmann’s famous Psycho score. Poking around in the Arrow disc’s plentiful extras gave me the answer. During his interview, Richard Band explains that he meant the Herrmann lifts as “homage” to Herrmann’s famous score, not a rip-off of it. 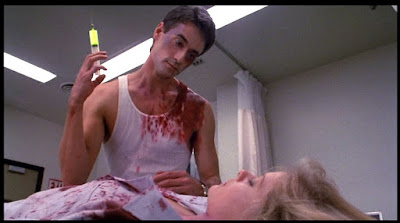 How iconic is Bernard Herrmann’s Psycho score? Today at a chicken restaurant, I was discussing this column with my lovely wife, when a stranger at a nearby table leaned over. “I’m sorry,” he said politely, “but I just have to ask. You were humming something… was that the opening music from Psycho?”

“No,” I replied. “It’s the opening music from Re-Animator.”

I am not a very musical person. Listen for yourself. Here’s the legendary Psycho main title theme:

So… it’s not just me, right? If you’re interested, here’s another version.

THRILLS: 80%
(Thrilling to see this team of talent at the top of their game, unfettered by considerations of “MPAA ratings” or “taste.”)

CHILLS: 75%
(In a seeming nod to old-school horror, the “find the cat in the basement” scene features shadows, suggestions… and barely any cat!)

SPILLS: 100%
(Practical effects done the old-fashioned way, with lots of latex, a little patience, and literally gallons of fake blood.)