Beware! Take care! Inside of this maze, you will find… disappointment!

Ron Furmanek and the fine folks at the 3-D Archive have restored William Cameron Menzies’s 1953 foray into the then-burgeoning world of 3-D movies, The Maze. This new disc stands as a testament to both how beautiful 1950s stereoscopic cinema could look and how the tireless efforts of contemporary technicians and optical magicians can allow us to re-experience those films in our own homes. Multiple sources report that this new restoration of The Maze, for a number of reasons, looks and sounds better than the original release prints. It is certainly one of the best-looking 3-D Blu-rays that I have watched on my home system.

That is a cause for celebration, but it is also a doggone shame, because The Maze simply isn’t a very good movie. Well-designed, atmospheric, and creepy as it may be, The Maze is ultimately sunk by its banal dialogue, half-hearted performances, and ludicrous climax. This is a rare case, for me at least, of wanting to love and embrace a film so much more than I actually do. I wanted to love The Maze, really I did; it was one of the Blu-ray releases that I was most looking forward to this year.

As I teacher, I’d describe The Maze as one of those students who comes to class every day, and does all the homework, then tanks the final exam. Great job showing up, Kevin, and your penmanship is excellent! But you’re still only getting a D.

As disappointing as the final result is, I’m still glad it exists. The 3-D is really cool, and there are some excellent shot compositions that may be worth checking out. 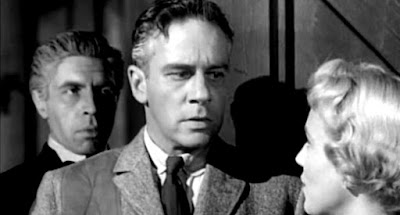 The Plot in Brief: During a vacation to Cannes with his new fiancé Kitty (Veronica Hurst) and her aunt Edith (Katherine Emery), Gerald MacTeam (Richard Carlson) receives word that his uncle Samuel has died. This makes Gerald the new baronet of Craven Castle, an enormous estate featuring an equally enormous topiary maze. Gerald immediately flies to Scotland.

Kitty does not hear from Gerald for several weeks, when Aunt Edith receives a telegram from Gerald, telling her that he must break off his engagement. Kitty, never one to take no for an answer, travels to mysterious Craven Castle with Aunt Edith in tow to find out what is going on. There seems to be a mysterious force controlling Gerald and all the servants; it has even aged Gerald twenty years. Could this mysterious force be found in… THE MAZE?

Besides the wonderfully creepy atmosphere and lovely shot compositions, I give The Maze a lot of credit for subverting the movie trope of the male gaze. In her groundbreaking essay, “Visual Pleasure and Narrative Cinema,” Laura Mulvey outlines a certain tendency of Hollywood cinema that she terms “the male gaze.” Most classic Hollywood films feature the male gaze, a POV that is assumed to be either the director’s or the film’s male protagonist. This often leads to a phenomenon that Roger Ebert dubbed “the seeing-eyed man,” where very often in adventure and horror films, the male lead sees the threat first and then helpfully points it out to his female co-star (sort of the cinematic equivalent of mansplaining.) 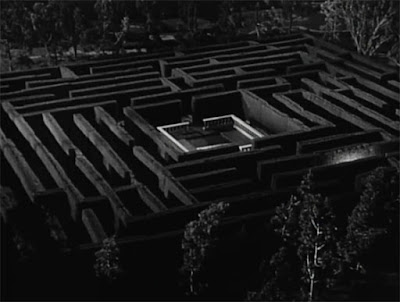 After a short prologue in Cannes (featuring a crazy dance trio that throws the female dancer into the audience through the magic of 3-D) where the POV of the film clearly belongs to Gerald, most of the film is taken up with Kitty’s sleuthing around Craven Castle and explicitly features her gaze as the film’s POV. This was unusual and groundbreaking for the 1950s. Once the film’s suspense trap is sprung and it is time for the Gerald character to explain all that we have seen through Kitty, the film’s POV shifts back to the male gaze for his asinine summation and the film’s conclusion.

The problem with The Maze is the thing behind the door. In his seminal book Danse Macabre, Stephen King writes at length about “the thing behind the door,” the conundrum that faces horror writers trying to scare readers with the unknown and mysterious. King writes, "Nothing is so frightening as what's behind the closed door. The audience holds its breath along with the protagonist as she […] approaches that door. The protagonist throws it open, and there is a ten-foot-tall bug. The audience screams, but this particular scream has an oddly relieved sound to it. 'A bug ten feet tall is pretty horrible', the audience thinks, 'but I can deal with a ten-foot-tall bug. I was afraid it might be a hundred feet tall.’ The artistic work of horror then is almost always a disappointment. It is the classic no-win situation. You can scare people with the unknown for a long, long time but sooner or later, as in poker, you have to turn your cards up. You have to open the door and show the audience what's behind it.”

The Maze film teases us with the riddle of just what is causing the weird behavior of the servants and Sir Gerald at Craven Castle. This suspense goes on for so long that viewers will be muttering to themselves “This had better be good” as we head into the film’s concluding minutes. 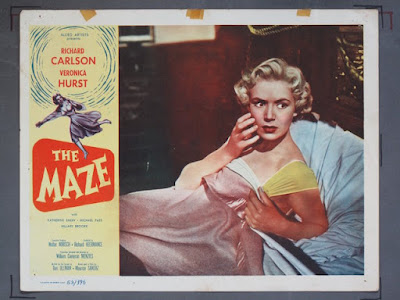 Then that door is flung open, and we find out exactly what is at the heart of the mystery. This reveal and its execution are absolutely ridiculous, turning the entire film into a shaggy dog story. I am not alone in hating the ending. No less an expert than Leonard Maltin has called the film’s climax “ludicrous and unsatisfying.” I shall not spoil it here. I am content to just keep it behind that goddamn door.

Look, pobody’s nerfect. This includes The Maze. If you are in the mood for a masterful 75- minute set-up, with beautiful sets and cinematography and suspense—but a conclusion that is as ludicrous as any I have ever seen—here’s your film!

THRILLS: 50%
(This is a masterful restoration—but to what end?)

SPILLS: 50%
(Some of the worst special effects in a Hollywood film; I’m talking rubber-bats-on-fishing-line bad. And at the end… well, you’ll know it when you see it.)