“What if it were YOUR sister?”

For an exploitation movie about the dangers of the big city, Trackdown surprises by having a few ideas to accompany the action. This film is deceptive like that; on the surface, there is nothing challenging about this cautionary tale. Karen Lamm (Thunderbolt and Lightfoot and two-time wife of Beach Boy Dennis Wilson) plays a seventeen-year-old Montana girl who leaves the big skies of her home in pursuit of the L.A. dream. Of course, what she finds is nothing but trouble. A Los Angeles gang that includes a pre-CHiPs Erik Estrada robs her, rapes her, and then kidnaps her. Enter James Mitchum (son of Robert) as her bear of a brother, complete with mustache, cowboy hat, and deerskin coat. Mitchum is a fish out of water (the Montana man in the big city) looking for his sister and encountering nothing but closed doors. Guess he’ll have to kick them open if he wants some answers.
This is what I mean when I say that there’s nothing particularly novel or unique about the premise of this movie, but it goes to some really surprising places. This movie could have been Mitchum going from bar to bar and beating people with pool sticks and breaking beer bottles over people’s heads as he looks for his sister. Well, okay, it does do that. But it could have been just that. 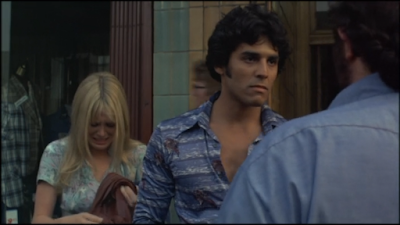 Thankfully, it aims higher. Characters feel surprisingly complex (except for Mitchum) and the story takes on many shades of grey. For instance, Lamm is brought before a powerful entertainment broker and corrupt businessman named Johnny Dee (played by an actor named Vince Cannon) who is financing a high-dollar prostitution ring. The leader of that ring is a woman played by Anne Archer (Good Guys Wear Black, Fatal Attraction) who buys Lamm and soon whisks her into the seemingly-glamorous world of expensive call girls. The best clothes, the best cocaine, and luxurious accommodations await Lamm, seducing her into what is essentially a sex trafficking operation. Things are complicated by the fact that Lamm’s character actually wants to be there and sees this life as the fast track to the life she’s always dreamed about.

We know that Johnny Dee is evil because he’s all about power and buying and selling human lives. But Anne Archer’s character is somehow even more evil because she’s encouraging young girls into this life in the first place, even though she knows how it ends. She makes an almost-convincing argument for her reprehensible behavior: sure, they’re prostitutes, but they’re also making a living without the need for a man to ever provide anything for them. That’s real power, and they’re using what they have to better themselves. Maybe she really believes what she tells her new recruits, or maybe it’s just part of the lie that helps line her pocket book. It’s wrong either way, but the movie takes the time to show the appeal of this life, and that’s not always the case with these films. It also hits close to home for us today, because the central organization that buys and sells women in this movie is eerily close to one that’s recently been in modern headlines. Smallville-actress Allison Mack is essentially the real-life version of Anne Archer’s character, recruiting women with the promise of empowerment and a higher level of existence. 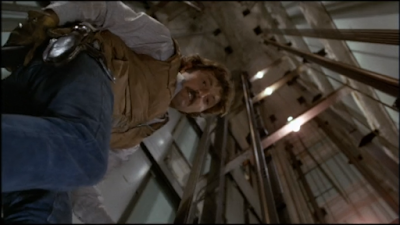 Of course, it’s not all ripped from today’s headlines, and if you’re looking for a good time, this movie is happy to oblige. Mitchum gets to beat up a lot of people, blow things up, and wield a rifle like a champ. I’ll be honest, this feels like a Chuck Norris movie in so many ways, but Mitchum is so laconic and disengaged on screen that he makes Chuck Norris seem like a charming conversationalist. Sometimes, this movie feels like a 90 minute episode of Walker: Texas Ranger where the cowboy has to rescue the damsel in distress. And to be clear, Karen Lamm is absolutely a damsel in distress. There is very little nuance in her performance. She runs away from home, gets off the bus in Los Angeles, and is immediately mugged three minutes after her shoes hit the pavement. Before the night is over, she has smoked a joint for the first time, gone to bed with Erik Estrada (who was complicit in her assault), and made some of the worst decisions ever. The script has done her zero favors. Luckily, the other women in the movie fare much better when it comes to depth of character. I’ve already mentioned Anne Archer’s duplicitous nature, and I think she does a great job playing someone who feels like a real person, even if that person is awful. But we also get a strong performance from Cathy Lee Crosby (The Player) as the head of a women’s shelter who takes in those who cannot help themselves. Crosby is the equivalent of the stubborn police chief who doesn’t like the maverick cop’s extreme methods but who recognizes that they get the job done. Before too long, she finds herself on the other side of the line. James Mitchum, Erik Estrada, and Cathy Lee Crosby unite to take on the trafficking organization. 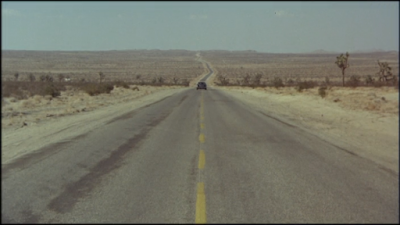 As cheaper, independent productions often do, this movie seems to lack structure. There are a lot of ideas here, but the execution lacks focus. It’s the action stuff that satisfies me the most and makes me want to recommend this movie. James Mitchum has all the charisma of a loaf of bread, but he’s physically imposing and it’s clear that he’s in great physical shape. In one scene, he picks a guy up like a toy and carries him over his head to a dumpster, where he deposits him. It’s a reminder that strength and power doesn’t always equal 200 pounds of lean, shredded muscle and human growth hormone. Mitchum also appears to do most of his own stunts, and some of them are very impressive, not to mention dangerous.

Aesthetically, Trackdown has that laid-back California country thing that I like so much (see just about every previous entry in the Back to 1976 series), but it couples that with the urban landscapes of seventies Los Angeles and adds the funky chicka-chicka wah-wah guitar that this movie has to have. It’s the best of both worlds as Montana country meets the bright lights of the City of Angels. It’s Wild Turkey meets Jive Turkey. We even get a sappy country song by Kenny Rogers called “Runaway Girl.” This might be B-movie heaven for me. 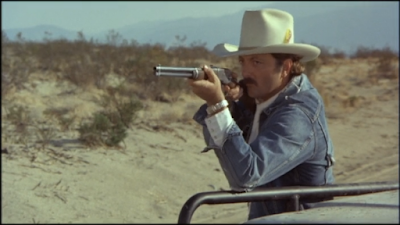 Trackdown provides exactly the kind of satisfying experience that good exploitation movies are known for. It suffers from a lead who seems either uninterested in the story or incapable of providing the appeal that action stars like—I can’t believe I’m saying this—Charles Bronson and Chuck Norris bring to their films, but it makes up for this in other ways. Erik Estrada is super-watchable in this movie, which was released a year before he became a TV mainstay. The cinematography is capable and sometimes beautiful. The music is great. Part of the plot feels like an ancestor to the movie Taken, and there are action scenes that predate similar pieces from Speed and Tango and Cash. Most importantly, the story appears predictable, but isn’t. When a movie attempts as much as this one does, it’s easy to overlook what doesn’t quite work and instead champion all the stuff that does.