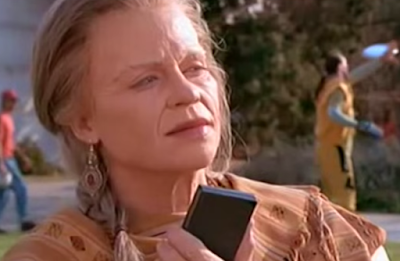 There’s a perfectly valid argument to made that Terminator 2 probably shouldn’t exist. Considering the closed-loop time/space logic of the original film, the death of Kyle Reese and the original T-800 should have prevented the Great Death Robot War of 1997 from ever happening. Instead, the recovery of said T-800’s CPU sped up Cyberdyne Systems’ research and led to the even worse Great Liquid Death Robot timeline of the sequel. Though T2’s theatrical ending closes on an appropriately-ambiguous note that reaffirms Sarah Connor’s “No Fate But What We Make” mantra, James Cameron’s alternate ending looks to the year 2027, in which an elderly Sarah watches her son (now a U.S. senator) and granddaughter play in a park similar to that from her Nuclear Nightmare. She explains that Judgment Day came and went peacefully, and that every day is a gift. I’ve watched this one a few times, and there’s just no way around it: this ending blows. Even with Skynet defeated, there’s still a sense of immediacy and purpose in the dark and winding road of the theatrical ending. This alternate version solidifies everything meant to be malleable and softens everything meant to feel dangerous. It’s too breezy, too simplistic for the movie that preceded it.

I’ve gone to bat for Creed as the best movie in the Rocky franchise, a soft reboot that amalgamates the series’ strengths while leaving behind the nationalism, street brawls, and talking sex robots (RIP Pauly) of previous entries. Honestly though, I think I’m just a huge fan of Old Rocky, because 2006’s Rocky Balboa would be my next pick. It’s a warm blanket movie that finds a middle-aged Italian Stallion wrestling with that ache in his gut telling him something’s been left unfinished. He decides to take on an exhibition bout with current heavyweight champ Mason “The Line” Dixon in order to prove he’s still got the eye of the tiger, the thrill of the fight, and so on. And he does! The theatrical ending finds him going the distance, losing to Dixon by a narrow split decision but winning his respect and some well-earned peace of mind. In an alternate cut*, Rocky wins the split decision in a massive (and frankly improbable) upset. I hate this ending, too. Rocky may be the favorite in Parts II-V, but Balboa returns him to underdog status. He’s not looking to win; he’s looking to make a statement about grit and perseverance and eyes and tigers and all that. This ending misses that point entirely.

3. Clerks - The Death of Dante Hicks

Kevin Smith has said that he modeled his debut feature on Spike Lee’s Do the Right Thing, “a very funny movie that ends with something shocking and violent.” In the version of Clerks originally submitted to film festivals, Dante Hicks is shot and killed by a mysterious assailant who robs the Quick Stop before disappearing into the night. The movie closes on his bleeding corpse and an eerie credit roll accompanied only by the sound of a chiming cash register. This, again, is stupid. Do the Right Thing is about a boiling pot that cascades over into chaos when Radio Raheem is murdered by the NYPD. It’s about how an uneasy cultural truce collapses on the hottest day of the year. Most importantly, it’s about the flippant indifference our society has toward tragedy, the ease with which the Bed Stuy neighborhood is told to move on and deal with another, hotter day. Clerks is a dick joke movie about being bored and playing hockey. What does Dante’s death actually say about anything? Smith wisely cut this crass and misguided ending at the advice of producer John Pierson, but it exists as a bonus feature on most home video releases and as part of the “First Cut” edition on the Clerks X set.

By now, we all know how Jordan Peele’s landmark 2017 social thriller (ahem) ends: After uncovering their plan to send him to the Sunken Place for good, Chris Washington escapes the Armitage family with the help of his friend, Rod. Their fate, however, is left unclear: will Chris be questioned? Will the rest of those rich white bastards carry on the body-snatching tradition? Peele’s alternate ending makes things more explicit: Rather than letting Rose bleed out in the street, Chris strangles her to death. Rather than being rescued by Rod, Chris is apprehended by the arriving police. The film closes on an incarcerated Chris walking down a long prison hallway, insisting to Rod that he’s comfortable with his fate because, at the very least, “[he] stopped them.” I’m honestly torn here, because while this alternate ending is probably the more realistic one — and the one that would give Get Out a new degree of sociological resonance — the theatrical ending just feels better. This is totally subjective and personal, but I prefer to read the movie as a heightened power fantasy not unlike Inglourious Basterds. Screw reality for a bit. Chris should win. Evil should be defeated. Peele wanted to give his audience a win, and I agree with his choice. Still, this is a tough one.

5. Scott Pilgrim vs. The World - Scott and Knives

Edgar Wright’s madcap video game manifesto faced a few tough challenges during its production, not the least of which being that the Bryan Lee O’Malley comic on which it was based was still unfinished. This left Wright and co-screenwriter Michael Bacall with a few options for an ending: In the theatrical version, Scott says goodbye to Knives Chau (who insists, rightly, that she’s too cool for him anyway) and joins Ramona across the threshold onto her subspace highway for more adventures. He battled seven evil exes (not to mention himself in the form of Nega Scott) to win her love, so why shouldn’t they give this relationship another shot? This feels fine, I suppose, but there’s always been something rushed and flat about it. It doesn’t feel like we learned anything. Luckily, we have the alternate ending: After she and Scott apologize to each other for their childish behavior, Ramona goes through the door alone. Scott and Knives make amends, and the movie closes on a slow-motion montage of them at the Ninja Ninja Revolution booth. It’s unclear whether or not they rekindle a romantic relationship, but this still feels like the healthier choice for all three parties, the best way for them to learn The Power of Self Respect.

What do you think of these alternate endings? What are some others you find interesting?

*This was very likely one of the dummy endings shot without the intent of ever being used, but since it exists as a scored and edited sequence on the film’s Blu-ray, I believe it qualifies for this list.
Posted by Patrick Bromley at 12:00 PM