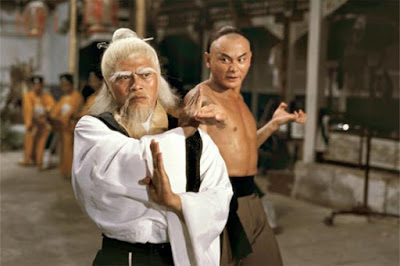 There are so many nutshots. 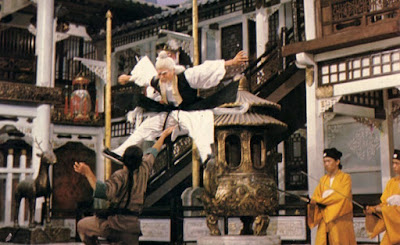 Local bad guy killed by two heroes. Bad guy’s brother gets revenge on one with “unbeatable” kung-fu. Remaining hero must learn new lessons from unexpected sources to beat the unbeatable.

The Most Junesploitation-y Thing About This

Definitely all of the nutshots. It seems so strange that kung fu fights don’t feature this more, because in the totally unlikely event that I was fighting, that’s what I would try to do. But, this movie goes way over the top in how often the heroes try to hit the villain’s nuts. This starts in the opening credits of the movie, as Wen-Ting and his best friend Ah-Biao combine to take down the evil Pai Mei (a popular Chinese villain character), and attempt no less than a dozen times to deliver the knockout punch to his crotch on his “vital nerve,” a critical pressure point (as any dude will tell you). To their dismay, Pai Mei has learned the art of relocating his “vital nerve” to a different part of his body, so it takes the combined efforts of the two heroes overwhelming Pai Mei to hit his pressure point and ultimately defeat him. Again, this is just the opening credits.

As it so happens, the dead Pai Mei has a brother, Priest White Lotus, who is also impervious to nutshots because he can relocate his “vital nerve.” On top of that, he has mastered a weightless technique which makes him impossible to hit because the force of the attempted blow gently pushes him away, like trying to hit paper. And on top of THAT, White Lotus has killed Wen-Ting’s friend Ah-Biao, which means he is on his own to defeat an enemy that will take the effort of at least two heroes.

One of the best ideas of the movie is that Wen-Ting tries and fails multiple times to defeat White Lotus on his own, only to narrowly escape death, re-train, and fight him again, each time improving on his previous skill. It gives us an excuse to stick with him to see how he’ll figure it out. He is forced to invent a new type of kung-fu, incorporating more deflective, gentle movements, and acupuncture. (Yes, acupuncture.) Armed with industrial size embroidery needles and a newly acquired knowledge of medicinal pressure points, Wen-Ting battles it out until White Lotus looks like a voodoo doll that was mad it wasn’t originally a cactus, searching for that vital pressure point. It’s an entertaining, inventive fight made better by the story beats that led up to it. 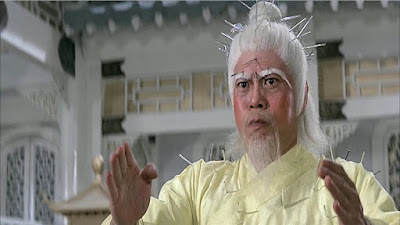 • To develop his new deflective, graceful style of kung-fu, Wen-Ting takes on a “woman’s style” taught to him by his friend’s wife, reasoning that White Lotus’s weightless kung-fu can be countered with a less forceful strike. The thematic implications here are plentiful; our hero needs to humble himself to learn, the wife helping him is a way to connect to his dead friend, the philosophical embrace of martial arts being the yin and the yang, the juxtaposition of opposites, etc. All of that makes sense, but Wen-Ting takes on a more “feminine” high pitched voice, and an overtly doe-eyed appearance, along with small, delicate steps, when he adopts this style. White Lotus at one point says to him, “you’re acting strange!” Is fully embracing the style mean fully embracing both the masculine and the feminine? Is he goofing around to distract his opponent? I don’t know. It does add levity and fit with the lighter tone of a story that could easily get bogged down in being grim. 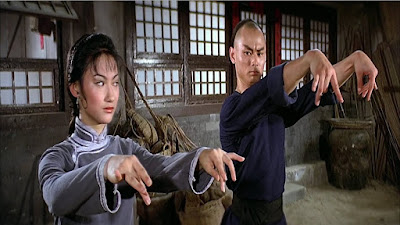 • Pai Mei, of course, is the character that Gordon Liu later plays in Kill Bill.

• Lo Lieh played Pai Mei in the movie that is a loose precursor to this one, called Executioners from Shaolin (1977). Gordon Liu is in it as well.

If Junesploitations of the past and present have taught me anything about kung-fu movies, it’s that Gordon Liu and Lo Lieh awesome. I love that Liu can play the typical stoic hero of martial arts legend, and that he can play something lighter and playful, all in the same movie. Lo is charismatic as a villain, and had already established his own ability to play the hero in earlier movies. To have one try to hit the other in the nuts is a treat worthy of Junesploitation.