This week, while our fearless leader enjoys his vacation, let’s take a look into the black, black heart of a man who enjoys his documentaries.

I now hesitate to buy any movie on physical media that I might watch only once. Friendship honesty policy: Don’t most of us only watch most documentaries once?

I thought so. The documentaries I recommend today all demand and reward multiple viewings! 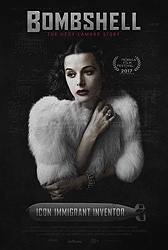 Bombshell: The Hedy Lamar Story (2018, dir. Alexandra Dean) I was lucky enough to catch this in a theater last January and talked about it enthusiastically on the podcast soon after. When it was first shown on the PBS American Masters program, I tweeted out a warning, so that readers and listeners could watch or record it. One of the people who liked the Tweet is the film’s director and writer, Alexandra Dean! This is surely one of the best documentaries of the year—in a year that has been blessed with a bounty of winners. (Both Won’t You Be My Neighbor? and Three Identical Strangers will also knock your socks off.)

Hedy Lamar was a beautiful, glamorous Hollywood actress in the 1930s and ’40s, but she also had a brilliant scientific mind. Though no one took her seriously, she co-invented the system that lead to the guided missile technology that helped America win World War II. She was never given any credit or reward for these inventions during her lifetime. This same technology went on to form the basis of many modern marvels, some of them contained in your cellphone!

Director Dean discovered that, at the end of her life, Lamar had recorded a lengthy interview with a New York journalist for a piece he was writing, and she uses the tapes as the narration of her documentary, so that Hedy Lamar seemingly tells her own story. It’s a magnificent touch. The filmmakers even get the “Hedy? It’s Hedley!” joke from Blazing Saddles out of the way early in the film, perhaps sensing that was where most viewers had first heard her name. Mel Brooks even returns at the end of the documentary to say something truly profound. Bombshell: The Hedy Lamar Story is what every documentary should aspire to be: clear, brave, and revelatory. You will never think of GPS the same way again.
(Watch on Netflix) 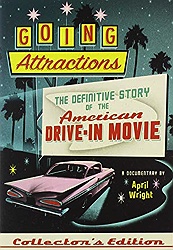 Going Attractions: The Definitive Story of the American Drive-In Movie (2013, dir. April Wright)
This fun examination of the drive-in movie theater era (era) certainly casts its net wide when it comes to interview subjects. Everyone from drive-in owners to drive-in lovers to drive-in projectionists to Roger Corman are interviewed, and the filmmakers also include a veritable blizzard of archival photographs, snack-bar commercials, and other drive-in ephemera to make this little film the last word on the subject. There are now fewer than 500 drive-in theaters left in the United States. Watching this terrific documentary is the next best thing to hiding some friends in the trunk and actually going to the drive-in. (Watch on Amazon Prime) 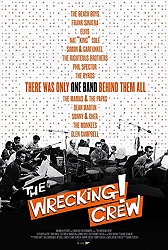 The Wrecking Crew (2015, dir. Danny Tedesco) Most of us know that the Monkees did not always play their own instruments on their records; seasoned, veteran session musicians took over, which lead to hit after hit. But who were those veteran musicians playing for the Monkees… or the Partridge Family… the Beach Boys… or virtually every pop singer of the 1960s? This film estimates that the same basic group of musicians played on literally hundreds of Top 40 hits.

“The Wrecking Crew” was the nickname for this loose group of studio musicians favored by producers like Phil Spector, Brian Wilson, Terry Melcher, Lou Adler, and Mike Post. The Crew included Hal Blaine, Carol Kaye, Joe Osborne, Bill Pitman, Glen Campbell, Leon Russell, Larry Knechtel, and Tommy Tedesco, and together had tight chemistry and a dynamic sound that shaped an astounding number of the songs you know and love. The film was spearheaded and directed by Tedesco’s son, Danny, and stands as something of a love letter to his late father.

Proving my earlier point about re-watching documentaries, I estimate that I have watched this documentary six or seven times. The film excels at explaining complicated musical ideas to laymen. I can’t think of another documentary that so consistently allows professionals to describe what they do best. Listen to Carol Kaye explain how she came up with the baseline that makes the Sonny & Cher song “The Beat Goes On” so infectious. It’s a feast for any music lover and a very sweet film to boot. (Watch on Netflix) 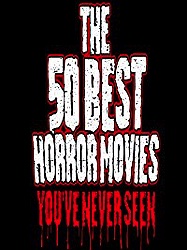 The 50 Best Horror Films You’ve Never Seen (2014, dir. Anthony Masi) The title may be a bit presumptuous for the movie-loving clientele of this particular website—but the choices here are satisfying obscure, and the talking head experts who tout them are interesting enough for you to give this made-for-TV documentary a stream. P.J. Soles is the largely off-screen narrator who sums things up at the end of every film’s segment.

I find documentaries like these are perfect for folding the laundry. I hate folding laundry. I love horror movies. Since most of the information is conveyed orally, you can keep up with the film while still folding. When it’s time to watch a juicy film clip, folding duties can be put on hold. Try it—it works great. It’s my version of multi-tasking.

Content-wise, it’s nice to see When A Stranger Calls, May, and Repulsion get their due, and there’s nothing more entertaining than listening to all the interviewees talk about the exact same scare scene in Exorcist III (You all know which scene they are talking about!) (Watch on Amazon Prime) 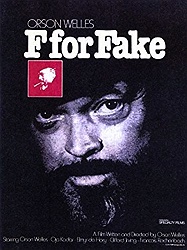 F For Fake (1973, dir. Orson Welles) Beyond being a terribly entertaining documentary, this is just one of the most goddamned original films ever made. It posits the documentary film as prank. It starts out as a straightforward, television style expose of Elmyr de Hory, a famous art forger, but proceeds to morph into an investigation of Howard Hughes, Clifford Irving, the whole idea of fraud, and finally the capacity of film to create the most convincing illusions. This film is like every documentary put into a blender set to frappé. This film is like being given a peek into Orson Welles’ brain. HINT: it’s a scary and exhilarating place. Check it out.(Watch on Film Struck) 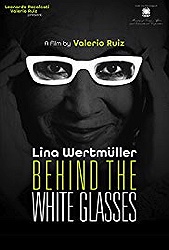 Behind the White Glasses (2015, dir. Valerio Ruiz) Lina Wertmüller enjoyed a brief, intense period of popularity during the early 1970s and then largely faded from view. This film is a long overdue exploration of the career that gave us The Seduction of Mimi, Seven Beauties, and Swept Away. I once taught a community education class on foreign film. No film garnered more intense and divisive debate than Wertmüller’s Swept Away. Her films still hold up and remain controversial, both hallmarks of great art.

BONUS: If you subscribe to Film Struck, you can watch this excellent documentary, then immediately binge-watch six of Wertmüller’s films. Buckle your seatbelts—it will be a bumpy night! (Watch on Film Struck)
Posted by Patrick Bromley at 5:00 AM