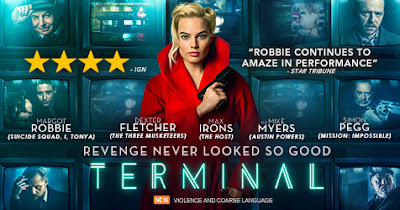 The foundational principles of Film Noir have always been cynicism, detachment, angst, and existential frustration. Through this lens, our world is cold and unforgiving, a derelict void to which we’ve all been doomed to putz around meaninglessly until the sweet release of death. Self-interest is the only logical approach — love is foolish and fleeting; cooperation and harmony are naive illusions. But rather than get lost in the hopeless darkness, Film Noir’s best anti-heroes have embraced this nihilistic perspective and used it to shield themselves from encroaching dangers. That can’t-beat-them-join-them, takes-one-to-know-one attitude grants the audience permission to identify with the likes of Phillip Marlow, Mia Wallace, and Jake Gittes; In a world full of monsters, they’re the kind of smart, smug, and stylish monsters we’d hope to be. In a world teetering on the edge of chaos, their merciless wit and street savvy keep them one step ahead of the next poor schmuck. 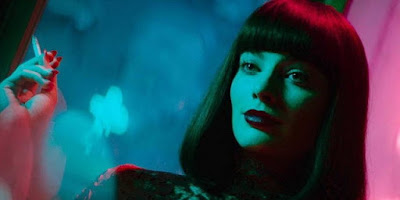 Terminal wants us to extend that same distinction to Margot Robbie’s Annie, the gorgeous and enigmatic waitress working the midnight shift at a grimy train station cafe. Like Annie, the world of Terminal is stark, angular, and neon-bright, a fantasy of hidden wonders and vicious perils. One night, two hitmen (Dexter Fletcher as Vince and Max Irons as Alfred) grab a booth and talk business. Turns out, the mysterious and powerful Mr. Franklyn has a job for them. Vince — the grizzled veteran — barks orders and talks tough. Handsome up-and-comer Alfred, however, is smooth and charming. Annie takes to the latter man right away, and it’s not long before she’s appearing in places she shouldn’t be, guiding the pair along from one task to the next. Just as we’re starting to get a feel for Annie’s true purpose, Terminal flashes back three weeks to the icy femme fatale’s meeting with terminally-ill English professor Bill (Simon Pegg). Annie is wearing a different face for this meeting; she’s eager and lively, egging Bill on as he contemplates suicide. How does he play into this? We’re not sure.

Things go predictably haywire from there, but as you might expect for a film of this kind, revealing too much of Terminal’s later acts would spoil the fun. First-time writer/director Vaughn Stein mixes and matches his best Frank Miller with his best Guy Ritchie, crafting a frenetic and elaborate narrative that, while overly-styled and verbose, never gets too convoluted for its own good. In fact, many will see Terminal’s neat wrap-up to be a betrayal of Film Noir’s trademark complexity; we’re almost too in the loop at times, and it’s arguable that Terminal is a little too impressed with itself, its glitzy world a little too small to work as well as it should. Any world-building quibbles are forgiven, though, because this is Margot Robbie’s film (literally — it’s her sophomore producing effort after I, Tonya), and she owns it from frame one. Not only does she wear a colorful collection of wigs, dresses, and make-up (including a black number that is straight-up Lauren Bacall), but even her gait and body language have that shape-shifting variety from scene to scene, leaving no doubt that she’s one of the best actors of her generation.

She’s not alone. Terminal’s greatest strength is a crop of stellar performances, especially from Simon Pegg as Bill. Pegg has shown off his range in a number of roles since his Shaun of the Dead days, but no one has ever asked him to go quite this dark. There’s always been something slightly unhinged about Pegg’s wry smirk (a camouflaged sadness that makes the still-underrated The World’s End succeed in ways it shouldn’t), and the doomed and complicated Bill is a welcome addition to his filmography. The real standout, though, is probably Mike Myers (yes, that one) as the limping “Supe,” an all-purpose clean-up man in the employ of Mr. Franklyn. It might take you a solid act to realize (as it did me) that it’s Myers under the makeup, and while his larger role in the plot is telegraphed far too soon to be interesting — another drawback of the film’s limited scope — his performance is subdued and earnest enough that we forget Austin Powers and Shrek just long enough to appreciate it.

Terminal isn’t perfect, and you’ll know within the first twenty minutes if it’s going to work for you. But the worst sin a film can commit is to be boring and forgettable, and if I’m a bit too effusive in my praise, it’s only because the Redboxing annals are full of lazy and unimaginative garbage that I’ve struggled to come up with any opinion on at all. Terminal is at least solid and interesting, a strong (if derivative) first directorial effort from Vaughn Stein and more early proof of Margot Robbie’s instincts as a producer. There’s a certain throwback quality to it; its gutsy and acerbic early 2000s vibe puts it right at home with the likes of Smoking Aces or Oldboy, or with that cycle of British gangster films featuring potty-mouthed Cockney bruisers waxing philosophical over handguns and tea. Those looking for something even gnarlier should hang in for the last ten minutes or so, when the film leans straight into the revenge its been teasing all along. Just make sure you brush up on your Alice in Wonderland ahead of time.
Posted by Patrick Bromley at 5:00 AM