Is there anything better than discovering a new film… a new film with a cool cowboy hero and a body count over eighty?

The film-loving world again owes Arrow Video a debt of gratitude. Their new box set, The Complete Sartana, resurrects an obscure Spaghetti Western series and presents it in near-pristine quality with a bounty of extras.

Who is Sartana, you may ask? Sartana is a character played by Gianni Garko across many films in the 1960s and ’70s. The character’s inauspicious debut was in the film Blood at Sundown in 1967, but the series proper begins with If You Meet Sartana, Pray for Your Death, which was directed and co-written by Gianfranco Parolini (changed to “Frank Kramer” for the American release). Sartana is an anti-hero in the style of “The Man With No Name” character played by Clint Eastwood in the Sergio Leone “Dollars” trilogy, but Parolini mixes in material more suited to James Bond, of whom Parolini admits to being a big fan. Saratana is one part hired killer, one part magician, one part MacGyver, one part superhero, and one part ghost. It’s an interesting mix. 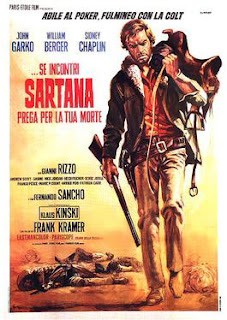 The Plot in Brief: After a criminal gang led by Morgan (Klaus Kinski) stages a daring stagecoach robbery to steal a trunk full of gold, Laskey (William Berger) appears with a Gatling gun and robs the robbers. Sartana (Gianni Garko) arrives mid-robbery and is almost killed in the crossfire, but narrowly escapes. When Laskey later joins some sleazy locals in a criminal conspiracy, Sartana rides into town and, with the help of perpetually laughing gravedigger Dusty (Franco Pesce), vows to kill everyone connected with the scheme and take the gold himself.

Although the trope of Sartana leading all the bad guys out into the desert again and again in order to kill them becomes somewhat strained by the film’s third act, I was impressed by the film’s script, direction, and production design. A card game that would fit comfortably in any James Bond film is photographed against the backdrop of a convincing western saloon with can-can dancers cavorting about on stage. Later, Sartana rigs a trick in his rented room using a chair, a rope, and a window that would make Buster Keaton proud. Parolini has a real eye for interesting compositions and situations, and he frames his shots to get the maximum impact from the actors, costumes, sets, and outdoor desert splendor. The action set pieces are staged and photographed in interesting ways, and I felt as I watched the film that this cast and crew were not simply going through the motions or aping another then-popular film series. 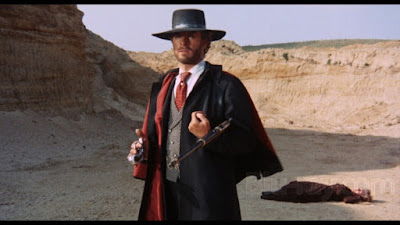 I’m not sure whether to praise or find fault with the transfer here. As we were watching the film, my son remarked, “It looks just like a print in a movie theater” because there is some visible grain and occasional green scratch lines. It did look and feel exactly like we were sitting in some former movie palace downtown in the late 1960s, watching this crazy Spaghetti Western. I’m wondering if that was Arrow Video’s aim.

The first Sartana film was a big hit, and Giuliano Carnimeo took over the directing duties on the four excellently-titled sequels, all of which are included in Arrow’s new Blu-ray boxset: I am Saratana, Your Angel of Death; Have a Good Funeral, My Friend… Sartana Will Pay; Light the Fuse… Sartana is Coming; and Sartana’s Here… Trade Your Pistol for a Coffin. You have to love a film series that makes such profligate use of ellipses in the titles.

But the series did not end there! Like the ghost of a dead gunslinger, the character lived on. Other actors essayed the role and other directors signed on, and the series continued in films like Sartana Does Not Forgive; Shadow of Sartana… Shadow of Your Death; Four Came to Kill Sartana; One Damn Day At Dawn… Django Came to Kill Sartana; Sartana in the Valley of Death; Django and Sartana are Coming… It’s the End; Sartana Kills Them All; Django Defies Sartana; Let’s Go and Kill Sartana; and Trinity and Sartana… Those Dirty S.O.B.’s. I am not making any of these up.

According to the booklet that accompanies the Arrow box set, no less an authority than Sergio Leone once joked that the Sartana films were becoming so decadent and ubiquitous that the next one should be titled, If You See Sartana… Tell Him That He’s An Asshole! So here’s a fun game you can play: make up your own Sartana title! I will start you off, loyal readers, and you can suggest your own titles in the comments section below. Make sure to use ellipses! Ready?

If You Go to the Farmer’s Market, Tell Sartana to Pick Up Blueberries… and Bullets!

Sartana’s Erectile Dysfunction is Nobody’s Business… Except Him and His Doctor!

Django and Sartana Invite You to a Potluck, So Bring Your Mom’s Cheesy Potatoes… and Coffins!

Sartana Knows Where You Live, So Board Your Pets… Because Sartana Will Surely Kill You… But He Does Not Have Time To Give Your Cat Its Medicine!

Got Junk? Call 1-800-SARTANA... Then Hide Behind The Junk So Sartana Cannot Find You!

OFFICIAL IF YOU MEET SARTANA, PRAY FOR YOUR DEATH THRILL-O-METER READING: 80%

THRILLS: 80%
(Does the sight of many baddies getting shot to death ever get old?)

CHILLS: 80%
(For a few suspense-filled minutes, we think Sartana might be supernatural or a ghost.)