Are you looking for cool movies you can watch without needing a disc? Look no further! 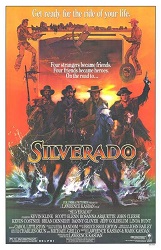 Silverado (1985, dir. Lawrence Kasdan) There was a real lull in the American western during the '80s, with only a handful being produced in Hollywood despite being the most popular genre for many years. Lawrence Kasdan's Silverado is one of best of this limited number: a rousing and old-fashioned western with a cast so good it reads like fan casting: Kevin Kline (with a beard), Brian Dennehy, Scott Glenn, Kevin Costner, Amanda Wyss, Linda Hunt, Danny Glover, John Cleese, Jeff Goldblum, Rosanna Arquette, Jeff Fahey, Lynn Whitfield, Richard Jenkins...we're this many names deep and it's still amazing. This movie is terrific. The Music Box Theatre in Chicago is screening it in 70mm this September and I can't wait. (Watch on Netflix) 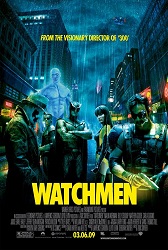 Watchmen: The Ultimate Cut (2009, dir. Zack Snyder) Look, nerds! It's the Snyder cut! I'm a big fan of his adaptation of Watchmen, and the fact that Amazon is now streaming the super-long "Ultimate Cut" (previously only available on Blu-ray that was hard to find for a while, though TNT has aired it before too) is pretty cool. The additional live action footage really does improve the movie -- in particular the scene that shows the fate of the original Nite Owl -- but the animated "Tales of the Black Freighter" stuff inserted back into the movie is probably overkill. It's a fascinating experiment, though, and once that feels truer to what Snyder was trying to do...which is slavishly recreate the experience of reading the book. (Watch on Amazon Prime Video) 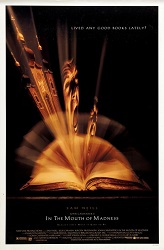 In the Mouth of Madness (1995, dir. John Carpenter) Do you read Sutter Cane? John Carpenter's last best movie has arrived on Shudder at the same time that Scream Factory has released their new special edition Blu-ray. If you've never seen it and want to check it out before making the investment, or if you have it on order but can't wait until it arrives to watch it, here's your answer. This is smart, creepy horror, heavy on the Lovecraft and with a great and all-too-rare lead turn from Sam Neill. I'm happy that this movie has been reassessed in the last decade or so and is now considered alongside Carpenter's other great works. (Watch on Shudder) 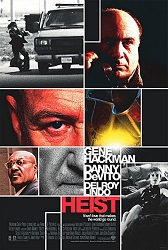 Heist (2001, dir. David Mamet) As a fan of heist movies and movies with great dialogue and movies with great actors, I'm a fan of Heist. Rebecca Pidgeon is a great actor who might be somewhat miscast as a femme fatale, but watching Gene Hackman and Danny DeVito bounce of one another and hearing the amazing turns of phrase Mamet scripts ("Everyone loves money. That's why it's called money.") makes for one of my favorite movies of 2001.  (Watch free with ads on Vudu)
Posted by Patrick Bromley at 12:00 PM