Off the Shelf: BLAST (Blu-ray) 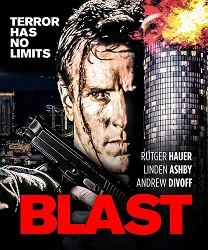 It's Die Hard at the Olympics! In case the poster art didn't tell you.

From the looks of its Blu-ray cover, 1997's Blast is the Asylum version of Die Hard. I especially love that there's a skyscraper exploding in the artwork, because there isn't a skyscraper in Blast. The whole thing is set at a pool...sorry, "aquatic center"...as a group of young women prepare for the Olympic games in Atlanta. It follows the Die Hard template completely, which is no different than a lot of other Die Hard rip-offs in the '90s, but the shamelessness with which MVD is marketing this new Blu-ray release is almost dizzying.

Linden Ashby (Mortal Kombat's Johnny Cage) plays Jack Bryant (!), a former Olympic competitor who flamed out and is now working as a janitor, gets caught up in the terrorist takeover of a...swim practice? Nakatomi Plaza is ain't. The Wishmaster himself, Andrew Divoff, plays the terrorist leader Omodo, who threatens to kill off every member of the girls' swim team until his demands are met. Only Jack Bryant can stop him! And wouldn't you know his Olympic sport happened to be taekwondo ? I guess curling wouldn't have come in as handy. Oh, and Jack's ex wife happens to be the assistant coach, meaning she's being held hostage by the terrorists too! I can't remember where I've seen that before. 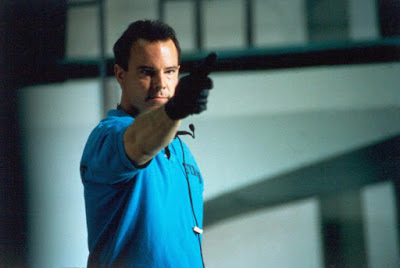 In so many ways, Blast feels like it was made specifically for us at F This Movie!. It's directed by Albert Pyun, a favorite of mine and someone I've written about again and again. Andrew Divoff plays the bad guy, so Adam Riske's on board. It's the kind of movie Rob would have rented from a Redbox if those existed in 1997. It's set at a pool, and Erika likes to swim. It has words in it, and JB was an English teacher. What I'm saying is that there are few film sites that will talk about a new Blu-ray of Blast with as much excitement and enthusiasm as we (I) will, even if it's not one of Pyun's best.

The cast is fun if you like these kinds of movies: besides Ashby and Divoff, the film stars Thom Matthews (Return of the Living Dead, Friday the 13th Part VI: Jason Lives) in a pair of comical shorts as the asshole swim coach -- this movie's Ellis. Tim Thomerson shows up as the cop who's trying to help on the other end of a walkie talkie. Rutger Hauer shot a day as a guy behind a computer; both his hairstyle and his role in the film are completely inexplicable to me. He's in a motorized wheelchair and is maybe playing the part as Native American?  Yuri Okumoto (The Karate Kid Part II) is an FBI agent. Vincent Klyn, the memorable villain of Pyun's Cyborg, plays someone credited on IMDb as "Intense Man." Even Shannon Elizabeth shows up in a wordless role as one of the frightened swimmers. This movie is start-studded, provided you have the same definition of "star" as me. 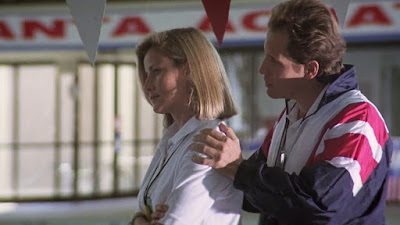 Pyun has a history of movies being taken away and recut without his input, I suspect because he worked so regularly in low-budget genre films where the producers and financiers putting up the money expected a very specific kind of movie. When Pyun would turn in something artier and more idiosyncratic -- Pyun gotta Pyun -- the film would be taken away and turned into something more traditionally representative of the genre. Now, I don't know for sure that's the case with Blast, but it does feel like it. The movie is slicker and more polished than some of his other work of the same late-'90s period, and while the cast is fairly small and the action more or less confined to a single set, it seems like there was a little bit of a budget to work with (until, of course, a climactic explosion that's as bad as anything I've ever seen in an actual movie). It's the pacing that feels off, especially in the first third as all the pieces are put into place in what feels like real time. The movie has the kind of rhythm you get when an editor isn't all that experienced and just includes most of the footage they have because, well, they have it. 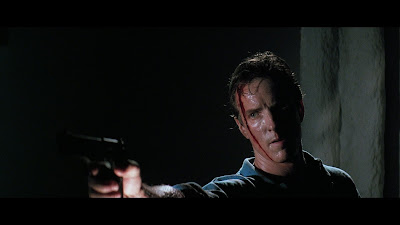 As a Pyun fan, I prefer his weirder, more personal films; this one feels very much like a for-hire gig that brought him in because he can direct these kinds of movies on time and on a low budget. As it is, Blast is a fairly generic late-'90s DTV actioner -- the kind of movie in heavy rotation in HBO's Friday night lineup at that time. It has many recognizable faces, the premise is simple and familiar, and every few minutes there's a burst of action or violence to keep undemanding genre fans satisfied. I consider myself a pretty undemanding genre fan, but Blast meets just the bare minimum of my threshold for this stuff. Most of the reasons I find myself enjoying it have less to do with what happens on screen and more to do with my affection for many of the parties involved.