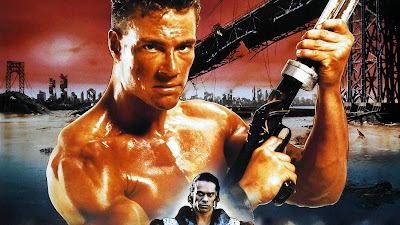 This is the movie that made me a JCVD fan for life.

1989 is the year that made Jean-Claude Van Damme a household name. Though already a world-renowned karate champion by the time he came out to Hollywood, Van Damme was consigned to extra work and bit parts until 1987, when he finally got a major role as a villain in No Retreat, No Surrender. By 1988, Van Damme was finally headlining his own features in both Black Eagle, and, more famously, Bloodsport for Cannon Films. The following year, JCVD was poised to become a full-fledged action star through his partnership with Cannon, appearing as the above-the-title lead in both Kickboxer and the sci-fi actioner Cyborg, my first exposure to Van Damme and still one of my favorites of his filmography.

Directed by my beloved Albert Pyun, a filmmaker whose work I have championed time and again on this site, Cyborg casts Van Damme as Gibson Rickenbacker (and, yes, before your eyes roll out of your head, know that everyone in this movie is named after instrument brand names), a mercenary/"slinger" who agrees to shepherd the cyborg Pearl Prophet back to the Center for Disease Control in Atlanta in a post-apocalyptic America wiped out by disease. Pursuing them the whole way is a band of murderous pirates led by Fender Tremolo (Vincent Klyn), who doesn't want the cure that Pearl is carrying to make it back to the CDC. He likes the world the way it is, which we know because he announces as much during the voiceover that opens the film. The rest of the film finds Gibson, Pearl, and Nady (Deborah Richter), an orphaned girl they pick up along the way, attempting to outrun and fight off Fender and his goons with the fate of the world at stake. 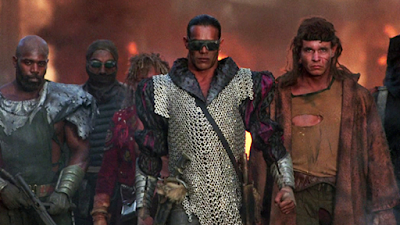 The story of Cyborg is a fascinating tale of a movie coming together when it absolutely shouldn't, seemingly every force working against it actually making it to the screen. The film started life first as a sequel to Cannon's Masters of the Universe and then as Spider-Man, to which Cannon held the rights in the 1980s. Both were to be directed by Pyun. Legal battles and rights disputes prevented Cannon from moving forward with the project, but as the studio had already sunk roughly $2 million in sets, costumes and preproduction costs, Menahem Golan and Yoram Globus commissioned Pyun to write a film to make use of the sets and shoot a movie to recoup their costs. Pyun conceived Slinger, part post-apocalyptic western, part rock opera, with a guitar-heavy score by his usual composer Tony Riparetti. He wrote the film for Chuck Norris, who was making a lot of movies with Cannon during the '80s, but the studio was interested in launching Van Damme as their new in-house star. He was cast and, as an up-and-coming star really trying to flex his muscle (so to speak), created a tumultuous production. An actor literally lost an eye during filming. Van Damme and his creative partner Sheldon Lettich (who would go on to write and/or direct a number of JCVD's movies), unhappy with a test screening of Slinger, went to Cannon and recut the movie, locking Pyun out of the process and making significant changes.

And so Slinger became Cyborg. It was cut down from an X (for violence) to a more commercial R rating. Tony Riparetti's score was jettisoned in favor of a cheap-sounding synth score. The entire film was reworked to change both the nature of the conflict -- rather than restoring power to the world, as in Slinger, Cyborg is now about recovering the cure for a plague that has wiped out humanity -- and the villains, who were changed from Satan worshipers to anarchists. The ending is much bleaker. Slinger was to be, in general, a much darker and nihilistic film, so I sort of understand why Van Damme and the producers at Cannon wanted something commercial, especially as they wanted to use the movie vehicle to continue their push for JCVD. I'm not saying I agree with the changes on an artistic level, but I get why they were made. Plus, it's pretty much the story of Albert Pyun's career: he's a visionary who works fast and cheap in less-respected genres, then has his films second-guessed and recut when he delivers something weirder and more ambitious than his financiers expected. It's why I love him. 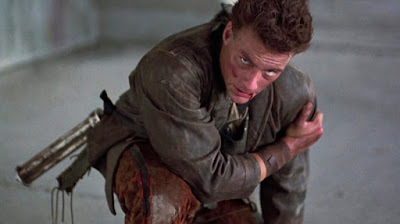 What is too often overlooked about Pyun is that he's a real stylist, probably because the scripts he gets, the budgets he gets, the loss of final cut results in movies that feel incoherent and messy. He's a student of the western, too, having studied under Kurosawa in his early days. All of this is on display in Cyborg, which plays out just like a classic western for the '80s post-apocalyptic set: Van Damme the hired gun, Pearl the woman he's hired to protect, the barren landscape standing in for the frontier. Where the film departs from, say, the work of John Ford is that it lacks the A-B propulsiveness of a Stagecoach. There's little sense of geography or even accomplishment in Cyborg, a movie that instead sort of drifts from scene to scene, set piece to set piece. Action beats break out without really being set up as Fender and his goons just appear, like a nightmare in which you're being chased and you can't ever get far enough ahead to be safe. Much of Pyun's work in the '80s has that sort of dreamy quality, partly because of the gaps in his narratives and partly because he's influenced by music videos. Cyborg is a film driven less by what happens than by how it feels: the desolation, the bleakness, the nightmarishness, the brutality of the violence. It's the sci-fi action movie as tone poem.

Does it feel like I'm overstating the strengths of what is regularly dismissed as cheap Cannon schlock? Probably. But the whole point of these #HeavyAction columns -- in much of what I try to write, actually -- is to find artistic value in films that are rarely recognized for being art. Cyborg is art. For a film born of such challenging origins, thrown together to make use of some sets, written in a weekend, it succeeds where so many others like it (even in Pyun's own filmography) come up short. Its spareness is a strength, its villain truly intimidating, its vision of a desolate future and a world ruled by violence different than pretty much all the other low-budget action films of the period. Kickboxer was Van Damme's commercial calling card in 1989. Cyborg is its bastard cousin, but in the best possible way. It challenges the language of traditional action cinema and forces Van Damme into corners he might not have otherwise explored so early in his career. 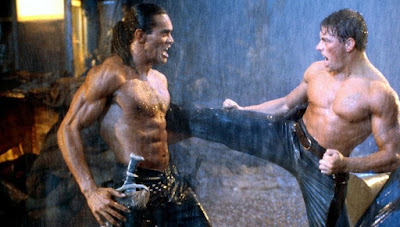 Like in a lot of his early roles, Van Damme is playing a mostly silent hero in Cyborg. That's not uncommon for action stars, especially those of limited ability (Chuck Norris) or for whom English is not their first language (Arnold Schwarzenegger, JCVD). His performance isn't remarkable here (and it's not helped by an awful wig he's asked to wear in a series of flashbacks designed to fill in why he makes the choices he makes), but his physicality does shine and he looks cool. It's important to look cool in this kind of movie; I suspect it's what drew me to him as an action star when I saw Cyborg during a sleepover at 12 years old and became a Van Damme fan for life. What's interesting about looking back on the movie almost 30 years later is that it's both the first instance of Van Damme making a sci-fi movie, a genre to which he would return to maybe more than any of his contemporaries, and because it's a role that finds him the strong, silent type when these days he's actually known for his acting abilities. Roles like the ones he has in JCVD and Enemies Closer are among his best specifically because his performance is so good in both, not because of the way he does the action. His entire career can be viewed in comparison to what started here in Cyborg.

I was lucky enough to see the Slinger cut of Cyborg screened theatrically (from a workprint) a few years back with Pyun in attendance, not long before he was diagnosed with dementia. It's interesting as a curiosity in how it differs and better represents Pyuns' vision, but it still feels edited by necessity and not choice and pasted together with  awkward voiceover not recorded by Van Damme. The version was available for years on Pyun's website, as well as on Blu-ray in Germany. The theatrical cut is out on Blu-ray in just a few weeks from Scream Factory, but the Slinger cut will sadly not be included. 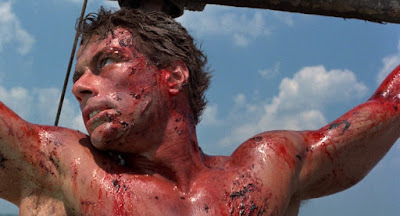 Cyborg was in the sixth position to be programmed into F This Movie Fest, mostly because one of the things I like doing with that day is turning people on to something cool that maybe they haven't already seen. But upon revisiting it to help make my decision, I discovered that the movie is oddly paced and quiet for long stretches. That doesn't make it bad; on the contrary, it's what helps set it apart and makes it so singular. But it does make it the wrong kind of movie for this event, so I had to exclude it from the lineup. At least I still get to write about it here. It's a movie I love from a filmmaker I love, one which helped set me down the path of #HeavyAction. For those reasons, it might be one of the most important movies of 1989.