The Happy and Heartwarming HONEY, I SHRUNK THE KIDS 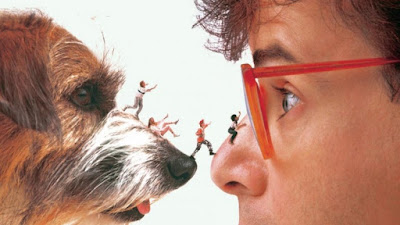 I love Rick Moranis. That’s a fairly well-documented fact as I am not shy about admitting my fondness for him. He is one of the earliest celebrity crushes that I can recall. My affection for him is mainly rooted in a deep love for Seymour in Little Shop of Horrors, but that is an article for another time. Many other movies cemented my love, and for 1989 week I will be focusing on Honey, I Shrunk the Kids. So join me in shrinking down and going back in time to 1989.

Honey, I Shrunk the Kids was directed by Joe Johnston and was his first movie as a director. He previously worked as an Effects Artist and Art Director on films ranging from the original Star Wars trilogy to Willow. Post-Honey, I Shrunk the Kids, Johnston directed movies like The Rocketeer, Jumanji, and Captain America: The First Avenger. He has a career that includes a number of my childhood favorites, and I am a fan of his work. The film was initially to be directed by Stuart Gordon (Re-Animator, From Beyond), as he and Brian Yuzna were the ones to bring the story to Disney Studios. I would have liked to have seen his version. I don't know if it would have been more horror or stayed as kid-friendly as the final product, but it would have been interesting no matter which way it went. 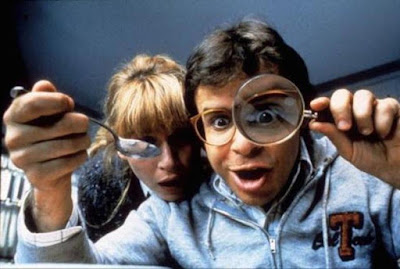 In Honey, I Shrunk the Kids (I should figure out a way to shorten the title, but HIStK sounds like a snake with a frog in its throat), Moranis appears as Wayne Szalinksi, inventor and the patriarch of the Szalinksi family. Wayne is working on creating a shrink ray but is dealing with frequent failures in the form of apples that rapidly explode instead of rapidly shrinking. It’s a bit of an issue. Wayne is married to Diane (Marcia Strassman), a real estate agent who is becoming fed up with Wayne’s lack of inventing success and the chaos of their household. They have two children: teenage Amy (Amy O’Neill) and child prodigy Nick (Robert Oliveri). The Szalinskis live next door to the Thompsons – a family of four that includes Russ Sr. (Matt Frewer), the father who is mostly focused on football and fishing trips, Mae (Kristine Sutherland), who is way more tolerant of shenanigans than I would ever be, the older son Russ Jr. (Thomas Wilson Brown), and younger son Ron (Jared Rushton). The Szalinskis drive Russ Sr. crazy with their oddball antics as he prepares for a fishing trip with his family and friends. Russ Jr. has a crush on Amy and Ron is the typical annoying little brother, as well as somewhat of a bully to Nick.

The relationships within each of the families contrast nicely with one another. Wayne and Diane are dealing with a rough patch that has led to her spending time at her mother’s house and away from the family, but they are both on good terms with their children. Russ Sr. and Mae have a stable marriage, but Russ is unable to connect with either of his sons – he expects Russ Jr. to share his interests and he doesn’t have time to spend to bond with Ron. Amy and Nick have a healthy brother-sister relationship – he annoys her, but she has an almost maternal outlook in her interactions with him. I find this refreshing as the movie could easily have made Amy the bratty teenager who hates her little brother. Instead, she is always keeping a careful eye out for Nick and doesn’t try to bully him. Russ Jr. and Ron have the more typical movie sibling relationship – they frequently butt heads and Ron likes to antagonize his older brother. 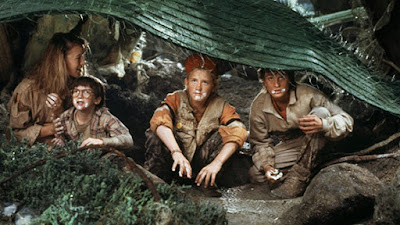 These relationships come into play once the children are shrunk. I hope that isn't a spoiler… the title gives the game away. Through a series of random circumstances, Amy, Nick, Russ Jr., and Ron are all shrunk to a quarter of an inch and tossed out in a trash bag. They then have to make their way across an overgrown yard (the equivalent of 3.2 miles) to find their father and have him return them to normal size. The siblings and neighbors must work together to accomplish this task. Amy continues to be protective of Nick, but also has to come to a compromise with Ron as they do not get along well. Russ Jr. is able to act on a longtime crush on Amy, as well as become closer to his own younger brother.

The "shrunk" portion of the movie is the most exciting part. The sets and practical effects used to show how small the kids are in comparison to everything else is extremely well done and holds up well even today. I remember watching as a child and being convinced that sliding down a piece of grass like a slide, sleeping in a Lego block, or eating a building-sized cookie would be the greatest thing ever to happen. I was less enthused about the giant bees, ants, and scorpions. The journey across the yard is an adventure that was fascinating to watch as a kid and still entertaining as an adult.

The MVP for Honey, I Shrunk the Kids goes to my boy Rick Moranis. As if that choice was ever in doubt. The role of Wayne Szalinksi could be thankless -- the bumbling oaf of a father that is often seen in other media, -- but as with the sibling relationship, the movie subverts that trope. Wayne may have inadvertently shrunk the children, but he quickly figures out what has happened and is able to use his inventiveness to begin searching for them. Chevy Chase and John Candy were both considered for the part; I can picture how the movie would have been with either of them, but I am happy that Rick Moranis was the final choice as he brings a nerdy sweetness to Wayne that nobody else could have. 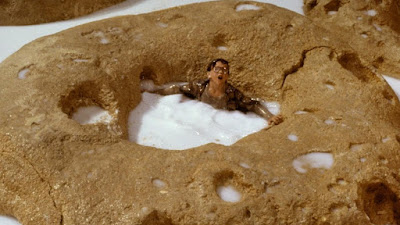 I'm assuming that everyone has seen Honey, I Shrunk the Kids, but that for many it has probably been years. Do me a favor and rewatch this week as one of your 1989 movies in preparation for F This Movie Fest 7. I guarantee you'll enjoy yourself.

I can't wait to marathon and live tweet with everyone this Saturday!
Posted by Patrick Bromley at 5:00 AM