I Gave Her My Heart, She Gave Me a Pen: Loss in SAY ANYTHING 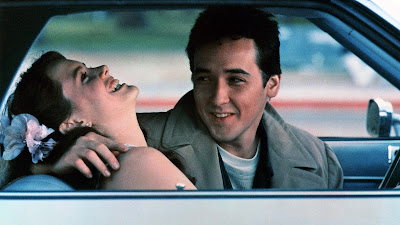 I’m assuming, and hoping that any of you reading this have seen Say Anything, and if you haven’t, you should watch it now, and then watch it again. It’s one of my three all-time favorite movies (it switches between which one I’ve seen most recently) and in my opinion it’s perfect.

I’m not going to talk about how Lloyd Dobler is one of the greatest movie characters of all time, its wonderful comedic timing, how it has one of the greatest single scenes involving “guys” ever, or how the love story between Diane and Lloyd is endlessly intoxicating. If you’ve seen Say Anything, you already know this. Out of all the things Say Anything does perfectly, I the way find it explores loss, coping with loss, and how it informs our actions endlessly fascinating.

I know it’s not the sexiest of subjects and can be downright depressing, but I can say that in all the thousands of movies I’ve seen in my lifetime, none of them quite deal with loss the way Say Anything does. Cameron Crowe, who both wrote and directed Say Anything, sneaks this theme into the movie to the point that the first couple times I watched it, I completely missed it. 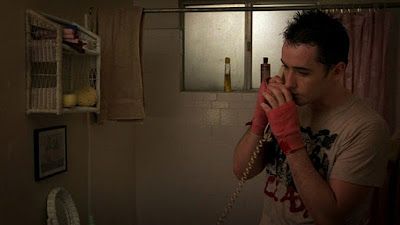 The first time this theme enters the movie is when we get to peer into Lloyd’s home life. Lloyd lives with his sister and her son, and during an argument Lloyd tells his sister how awesome she used to be, and how she may be angry, but he’s not her ex (we don’t know if it’s a boyfriend or husband) and in what we see as an effort to save her son’s feelings, he spell the name T-I-M rather than saying it. The name “Tim” is dealt with the way Harry Potter deals with “Voldemort.” It's the taboo name that just isn't mentioned. This is how Lloyd’s sister copes, this is how she deals with the loss of her relationship and a father to her son: by just not talking about it. Tim isn’t gone, he’s just not with her. He exists, but for her the way to deal with it is to just pretend he doesn’t.

Lloyd’s best friend Corey and how she deals with loss is so all-consuming that it becomes her character. Corey’s ex’s name is Joe. We know this because very early on, everything she talks about somehow circles back to Joe. Her obsession with Joe culminates by slapping us in the face with this theme as both Lloyd and Corey, on separate occasions, bring up how she has written 65 songs, all about Joe. What’s important about the Corey and Joe’s storyline is that Cameron Crowe dangles something that is very obvious in the way Corey is coping with the loss of a relationship, but in a subtle way shows us that sometimes the way we cope doesn’t always work (a theme that comes back later in the movie). We see it vividly in a scene where Corey is confronted by Joe, who gets a sick joy in toying with her. All the songs, all the self affirmations, and within seconds, Corey melts when he approaches her. The beautiful thing about what seems to be a throwaway side plot with Corey is how she becomes the success story to grieving. She beat it, she moved on, in the same way Lloyd tries to later. 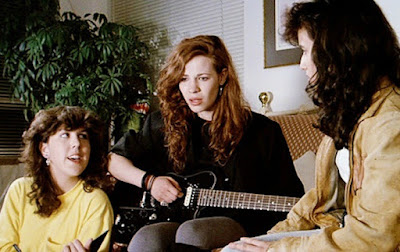 As the scope of the movie gets larger, we are faced with an entire class of kids who are dealing with loss as a whole. High school is ending, and while the party they all attend is seen as a celebration of high school ending, I’ve also seen this as another way of coping. There is a great scene where Lloyd is confronted by his guidance counselor outside the party for not telling her what he wants to do and he responds with “how many of them really know what they want to do?” I’m sure many of us can relate that while there was an excitement in high school ending, there was also sorrow in it. While I am cognizant that not all high school experiences are the same, there is a comfort in routine. In her speech during graduation, has a real moment where she says when she thinks about the future she’s scared. Throughout Say Anything, Diane is the most self-aware, and her saying this at the speech was a way to inform us that these kids feel this way too, but haven’t accepted that yet. How do these students grieve? By hiding it under joy, under a party.

These small subplots are all just setting us up for the story between Lloyd, Diane and Diane’s father, James Court. It seems creepy to say it like that, but what has always made this story so unique to me is how it is sold as a “boy meets girl” movie, it’s really more of a “love triangle.” One of the things that brings Diane and Lloyd together is their fear of the future, Diane’s fear of not living up to expectations, and Lloyd's fear of having to deal with it. Watching the two of them fall in love on screen is so intoxicating and is the part of the movie that brings me back to it time after time. What gets lost a lot of the time, though, is Diane’s relationship with her father. As we get to know Diane, we realize that she isn’t your normal high school student; she’s driven, but never really got to experience high school. Her best friend is her father, whom she chosen to live with after the divorce of her parents. Things quickly start to fall apart for Diane and Lloyd mostly because of Diane’s father. Her father is caught embezzling money from the people at the retirement home he owns, and as his crimes unfold, he convinces Diane to break-up with Lloyd. 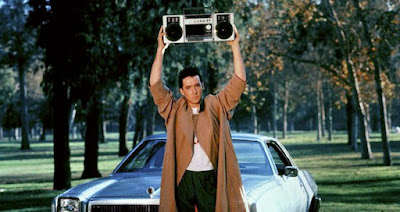 In these moments, we see the three of them start to deal with loss. We really only get to see one deal with coping, though, and that’s Lloyd. After the break-up, we see a broken Lloyd learning to cope with the loss of this relationship for which he’s worked so hard. He seeks out comfort from friends, from guys (one of my favorite scenes in any movie ever), from kickboxing, driving around narrating into a tape recorder, to Say Anything’s most iconic scene of him standing outside her house with a radio playing their song. Lloyd deals with loss by not knowing how to deal with loss. He’s a character that continuously seeks the high-road, but his anger causes him to struggle to find a way to cope. It’s this struggle to cope that informs his decisions by the end of the movie.

Then there is Diane. Diane is the smartest and most aware character through most of the movie, and when pushed by her father to end the relationship with Lloyd, she makes the logical choice of choosing her father. It’s not easy for her. One of my favorite scenes is of Diane talking to her father as the phone rings and saying “If I pick up, we will only get back together.” This is a girl who has always used logic in thinking through every decision in her life, and is not sure how to navigate emotion. Diane’s coping mechanism is logic. When things start to fall apart with Lloyd and with her dad, she rationalizes it, fights off emotion and moves forward. 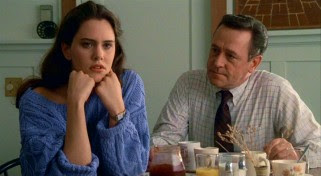 By far, though, my favorite arc in the Say Anything is that of James Court. Every decision, or line of dialogue he delivers is for his daughter and as we find out later, it is to a fault. When we meet him, not only do we see his relationship with Diane but also that he seems like a guy who has prepared for the day when his daughter leaves both financially and emotionally. James is not experiencing any loss when we first meet him, but he also had not planned on being convicted of a crime. When things start falling apart for James, there is a very haunting image of him sitting alone in a bathtub with his clothes on staring into space. He doesn’t know how to deal with this. The way he copes is to throw himself into the relationship with his daughter, and when this fails, he chooses anger. This leads to the culmination of events between Diane, Lloyd and James.

All the previous moments eventually lead to the confrontation of James and Lloyd in prison. Now in jail, James and Lloyd have a conversation, and, after finding out Lloyd is going to England with Diane, James hurls insults. They cut deep and go right after Lloyd’s own esteem issues. It's at this point where everything Lloyd has gone though pays off. Rather than yelling back at James, Lloyd realizes what he and James have in common, and that’s Diane. It’s never spoken, and you see Lloyd take a deep breath to control his temper and remembers what it’s like to lose Diane and how the most frustrating part was that she shut him out. He quietly stands up and gives James a letter Diane wrote for him, trying in any way he can to comfort James. It’s such an amazing, often overlooked moment that shows us exactly the type of person Lloyd is. In giving him this letter, we also see again how Diane deals with loss. She is crushed by losing the relationship and trust she had in her father and logically explains away her anger in a letter to her father. Diane also remembers how she dealt with the relationship with Lloyd and chooses to not make the same decisions, eventually coming in to see her father. 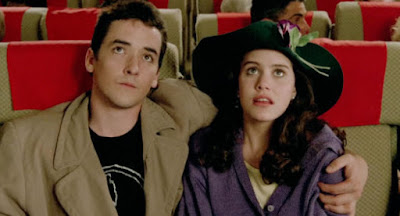 Say Anything was sold and advertised in 1989 as a romantic comedy, and for the most part it is. But when you start to do a deep dive into Say Anything, you start to see what a developed script and movie it is. Most movies that explore the theme of grieving or loss do so with it at the forefront and don’t hide it. Say Anything not only explores this theme better than most that tackle the subject, but does so by putting it under layers of other subjects that are much more obvious.