Off the Shelf: BOUND (Blu-ray) 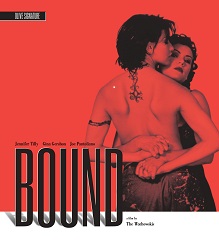 Olive Films gives a special edition upgrade to one of the best movies of the '90s.

I don't know if I was ready for Bound when I sat down at the multiplex on a Saturday afternoon in 1996. It had received some press in my hometown paper because the directors, sibling writer/directors The Wachowskis, were from Chicago, and I knew that it was a noir with a lesbian relationship, but that was all. I can still remember the way my brain lit up as the movie progressed, announcing the insanely confident arrival of two born filmmakers, dazzling me with style and a truly clever screenplay. I remember being giddy and possibly laughing out loud at the moment that the camera tracks a telephone cord (it was 1996 and those were still a thing) and does a little circle to follow a little loop in the cord halfway. It felt so inspired, both calling attention to itself as a movie and showing me something I had never seen in a movie before. It was just one small moment in a series of brilliant moments in Bound, but it's the moment I remember falling absolutely in love with the movie. More than two decades later, nothing has changed. 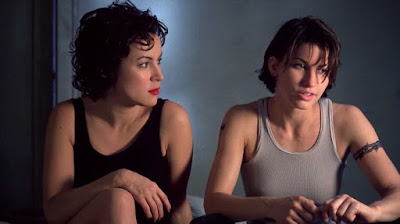 Corky (Gina Gershon, playing a character named Corky) has just gotten out of jail and takes a job as a building super, where she lives next door to Violet (Jennifer Tilly) and her boyfriend Caesar (Joe Pantoliano), who launders money for the mob. Violet and Corky have an instant attraction, which before long turns into a physical relationship and maybe more. Knowing that a bunch of money will be making its way through Caesar's apartment, the pair hatch a plan to make a big score. But can they get away with it? And can they trust each other?

When it was originally released, I remember Bound being compared to Blood Simple; not only was it made by a pair of siblings, but it's also a crime film heavily influenced by noir, incorporating some black comedy, and an impressive and stylish debut film. As one-to-ones go, it's fair. The movie was put together to show that the Wachowskis could direct a film -- a kind of low-budget "audition" before Warner Bros. would ever give them the money or the freedom to make a script they had called The Matrix. I love that Bound is something of a "practice run" for them, because as practice runs go, it's a great fucking movie. 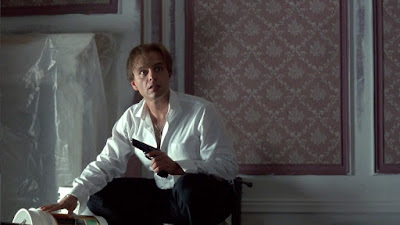 On paper, Bound is the kind of movie we were lousy with in the '90s: the colorful crime film about a bunch of people who all want the same pile of money. But Lana and Lilly Wachowski demonstrate that it's not the words but the music that make a movie special, so Bound is full of great characters, dialogue that's overheated to the point of self-awareness, double-crosses, inventive directorial flourishes, everything that makes movies like this fun. There are so many moments in Bound that stick in my head over two decades later, whether it's beats we so rarely get to see in movies (like the Wachowskis giving Caesar time to break down and cry as everything closes in around him) or beats that we get specifically because this is a movie (like the use of white paint during a bloody death because it looks cool and cinematic). This is a movie that celebrates being a movie, and it's no surprise that the filmmakers went on to giant careers making movies that celebrate the possibilities of cinema.

Previously available on Blu-ray from Olive Films, the company is now re-pressing Bound as part of their "Signature" series in a limited run of 3,500 units. Both the 108-minute R-rated theatrical cut and the 109-minute unrated cut are available on the same disc (though don't let that time difference fool you; I think the actual difference between the two amounts to less than 20 seconds), offered in a new 1080p HD scan created for this release. The new transfer is good, not great, and it's unfortunate that Olive wasn't able to spring for a full 2K or 4K scan of the movie as a real selling point. In addition to the very fun and informative commentary track found all the way back on the original DVD release, Olive has produced a number of new interview featurettes as a supplemental section to make this the "Signature" release. Gershon (who, and I cannot stress this enough, plays a character named Corky in this movie) and Tilly talk about the movie for nearly 30 minutes in a new interview, looking back on the buzz around the movie (including the now-famous love scene) and the impact it had on them. Also interviewed are co-star Christopher Meloni (this is the movie where he first came on my radar); Patti Podesta, who did the excellent title sequence; film professors B. Ruby Rich and Jen Moorman, who discuss Bound within the larger context of noir and neo-noir; and Bill Pope, Zach Staenberg, and Don Davis, who talk about the look and sound of the movie. Also included is the original trailer and an essay by writer/actor Guinevere Turner (Go Fish, American Psycho). 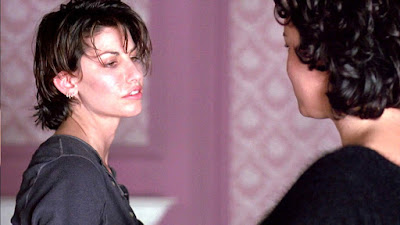 I love Bound and will always love Bound. Unlike a lot of its mid-'90s contemporaries, it's a movie that has lost none of its power or charm. It hasn't lost a step. The great movies never do. Seeing as Olive's previous Blu-ray came with no special features, it only makes sense to pick this one up if you don't yet own the movie (you should own this movie). The A/V upgrade isn't a huge improvement, but the bonus features are very cool and only enhance one's enjoyment of the movie. It's nice that they place the movie in both a historical context and in its proper context within the noir genre. Mostly, though, this release celebrates Bound as being special. It was in 1996. It still is today.