Once again, the Medved brothers were wrong…

When I was younger, I eagerly read all of the “bad movies” books by Harry and Michael Medved: The Fifty Worst Films of All Time, The Golden Turkey Awards, The Hollywood Hall of Shame, and Son of the Golden Turkey Awards. Although my teenage brain enjoyed all the mean-spirited snark, many of the films they wrote about were very hard to see in the early 1980s, so I just took their word on a lot of things… probably too many things.

Forty years later, I can watch almost any goddamn film ever made on my goddamn phone, and I continue to discover that the Medveds were better jesters than film critics. As Patrick and I have already pointed out in our award-winning podcast on Plan 9 From Outer Space (the film the Medveds named the worst of all time) that Ed Wood film—indeed, most Ed Wood films—are goofy fun, and far from the worst.

Fuck off with your hate and intolerance, Medveds! 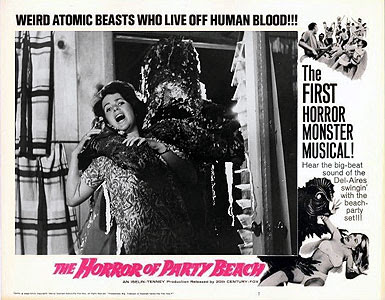 Severin Films’ Blu-ray release of The Horror of Party Beach gave me a chance to revisit another of the Medved’s alleged “worst” films, and guess what? They are wrong again. “Why would you trust them?” I scream to my 16-year-old self. “Those bastards named Richard Burton worst actor!”

True, The Horror of Party Beach catches a lot of shit, not all of it from the Medveds. It currently enjoys a 0% rating at Rotten Tomatoes and a score of only 2.8/10 at the Internet Movie Data Base. Gosh, I know that these are serious times, but doesn’t anyone have any appetite for dumb fun anymore?

The Horror of Party Beach not only defines dumb fun, but it may have INVENTED dumb fun. Produced on a shoestring budget by B-movie auteur Del Tenney (Psychomania, Curse of the Living Corpse, and I Eat Your Skin), The Horror of Party Beach tries with all of its might to combine two genres that were popular in the early 1960s: horror and beach party movies. This movie is like when your kid makes you breakfast on Father’s Day, and it’s pancakes with macaroni and cheese in them, and he’s like, “Daddy, you love pancakes and macaroni and cheese!” and you choke down a little bite and say, “Mmmmgggrrrhh-- these are great” but really you’re just happy because he tried, and at least he didn’t burn down the kitchen. And 78 minutes later you look at the plate, realize that you’ve eaten all of your macaroni-cakes… and that maple syrup and mutant monsters make everything taste good. 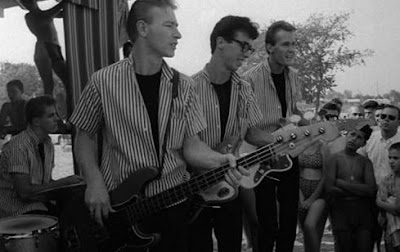 The Plot in Brief: There is a party beach on the East Coast. Supposed teenager Hank Green (John Scott) gets into a fistfight with motorcycle gang leader Mike (Agustin Mayor) over Hank’s girlfriend Tina (Marilyn Clarke). Tina feels bad that her wild, alcohol-fueled flirting caused the fight, and swims off to be by herself. She is attacked by a mutated monster, which kills her in a bloody and disgusting manner. Serves her right! Now Hank and Mike are friends.

When Tina’s body washes up on the beach, all hell breaks loose. Local scientist Dr. Gavin (Allan Laurel) investigates. More teenagers are attacked. The monsters terrorize dozens of girls at a slumber party. Dr. Gavin’s maid Eulabelle (Eulabelle Moore) blames the attacks on voodoo. Will Dr. Gavin figure out a way to dispatch the marauding beasts? Will hep music combo the Del-Aires ever play their lively rock-and-roll… on the beachfront… for the enjoyment of countless teens… again?

There are so many things to like in this unassuming little film that I can hardly list them all:

• It is both disconcerting and entertaining to see a beach party movie that is filmed in black and white and takes place on the East Coast. We take the sunny skies and suntanned bodies of the AIP beach party films for granted—The Horror of Party Beach looks and feels like a beach party held in a Soviet Bloc country on a grim, overcast day. The only swimsuit colors available are black, white, and dust.

• For a low-budget beach party movie, the film contains a surprising amount of gore, most of it achieved with chocolate syrup. Yum! 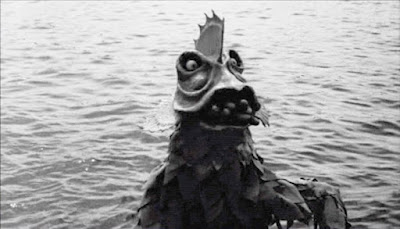 • Say what you want about the film’s risible monsters—but you’ve probably never seen anything like them. The bodies of the mutated creatures seem to be wetsuits covered in rubber triangles. The head parts of the costume resemble a cross between a lizard and a chicken whose mouth is stuffed with hot dogs. Or are they phalanxes of thick, cylindrical tongues? This shit gets scarier by the minute!

• The film features the cool garage-band sounds of the Del-Aires, who enjoy a permanent gig at the beach playing for all the groovy kids. One of their songs, “The Zombie Stomp,” is insanely catchy.

• As “DVD Savant” Glenn Erikson put it, “The Horror of Party Beach is a generic low-grade monster show with a difference—it's made with at least some spirit and it knows exactly what it is [….] Even though the monsters crash the party and slay every pajama'd girl in sight the tone of the movie never drops below giggle-level [….] In other words, it's silly fun.” 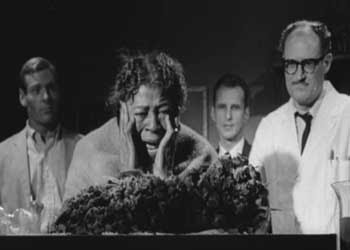 Not only is Severin’s new Blu-ray release spectacular to look at, sourced from the film’s original camera negative, it is also filled with an enjoyable amount of supplementary features that place the film in context: “Return to Party Beach,” a retrospective documentary featuring director Del Tenney’s widow, Margot Hartman; “It's the Living End,” an interview with original Del-Aires band mates Bobby Osborne and Ronnie Linares; “Shock & Roll,” an interview with filmmaker Tim Sullivan on rock-and-roll horror movies; and an archival interview with director Del Tenney himself.

You can also order the “Horror of Party Beach Bundle” direct from Severin Films, which includes a beach ball and a monster pin. If I have one quibble with this release, it’s only that I wish it had come out earlier in the summer so I could get more use out of this lovely beach ball. I think a poolside screening of Horror of Party Beach would also be fun. Dancing to “The Zombie Stomp” would be mandatory. 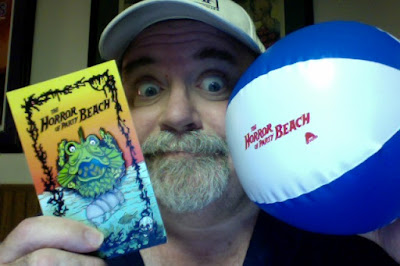 THRILLS: 50%
(Fascinating to see a fledgling filmmaker go the DIY route by combining two popular genres. It’s like a restaurant that makes its house dressing out of oil and… I don’t know… sand… or more oil, but a different kind of oil? Salad dressing metaphors are hard.)

CHILLS: 40%
(The monsters are not so much scary as inexplicable: did they all eat a bunch of gardening gloves?)