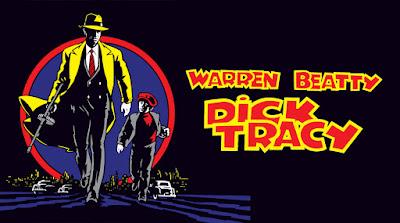 The review duo who only eat blue-plate specials.

I have a complicated history with this movie. Nearly every time I see it I have a different opinion, but it’s mostly an improved one in recent years. On this rewatch, I think I need to finally come to terms that despite its flaws, I love Dick Tracy. I resisted it in 1990 as a kid because I didn’t have much history with Beatty, Pacino, Dustin Hoffman, James Caan, etc., as performers, so it felt like my parents blockbuster despite its inviting, kid-friendly makeup, and set design. But with time and added film knowledge, it’s a much more enjoyable experience that doubles down on performer traits I’m now more familiar (e.g. Beatty’s egomania, Pacino’s tendency to go big with his performances and verbally fidget), and the film feels like a blockbuster with clear authorship that only Warren Beatty could have made. Rob, what are your initial thoughts on Dick Tracy?

Rob: Dick Tracy had one of the first movie marketing campaigns I can remember getting wrapped up in. I remember trading cards, fast food tie-in products, commercials for the soundtrack, and really, really wanting one of those wristwatch walkie-talkies. Until this rewatch, though, I remembered absolutely nothing about the movie itself. I was way too young to understand what it was doing when I finally saw it on VHS —again, I knew someone was selling it to me, but I didn’t know what it was or why I should care — so I was never interested in revisiting it until now. 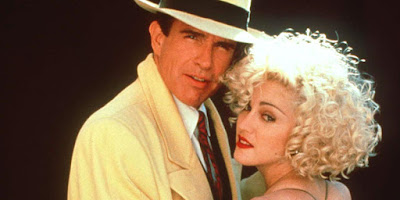 I actually went back and listened to your podcast episode from 2014, and I think — aside from loving everything about Pacino’s performance — I’m more or less where you guys were with it then. I think it’s a charming stylistic experiment for about thirty minutes, spins its wheels narratively for the middle hour, and then sort of putters out with a lame final set piece after which very little seems to actually have been accomplished. It’s really hard for me to imagine an audience getting jazzed about this movie, and I have to imagine that so much of its success had to do with residual Batman hype coupled with Madonna’s soundtrack.

Still, Dick Tracy is further up my alley than I give it credit for. I have a weird affection for this kind of period piece, those bombastic 1930s comic book serial homages like The Phantom (which Patrick brought up on the podcast), The Rocketeer, and (don’t @ me) Sky Captain and the World of Tomorrow. I don’t like Dick Tracy nearly as much as any of those, but there’s something about that art deco, primary color aesthetic with lively characters and old-fashioned themes that feels comfortable enough to get lost in a while.

Adam: You mentioned the art deco, primary color-focused production design and cinematography, which I agree are top-notch and still look great today, I think it’s really neat that Touchstone-Hollywood Pictures bet the farm on this MGM studios style for a short period of time in the ‘90s. It’s good nostalgia, like when you stay at the Caribbean Beach Resort on the Disney World property and it looks exactly as it did in 1990. 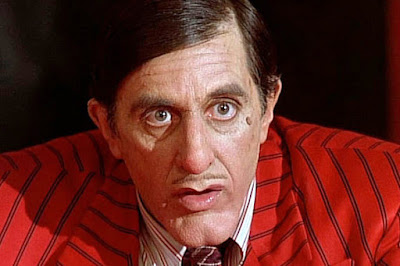 Before we get into why we’re really here (Pacino), I’m curious what you think about Warren Beatty’s performance. I think it’s fascinating and he’s an interesting guy on screen just generally - i.e. he’s a dick (no pun intended) but I like him, he looks a little like Richard Nixon yet he’s a heartthrob, etc. Not to be too tabloid-y, but he was in a relationship with Madonna at the time they made this movie and the documentary she did in 1991 (Madonna: Truth or Dare) sort of revealed him to be a guy who wants to leave a party. He seemed really old in relation to Madonna’s orbit. Dick Tracy, as a property (and Beatty’s obsession to bring it to the screen), reveals his old-fashioned nature and you can feel a tension in the film between the property and a new era of late '80s-early '90s blockbuster that’s trying to be cutting edge and modern. I think that’s why I enjoy his performance now more than ever: I feel like it’s a really interesting window into where he was at that stage of his career with both his on and off-screen image. I also find Danny Elfman’s quote about him on this movie oddly charming. He said “Warren was insane.”

Rob: I don’t have a ton of insight about Warren Beatty’s overall career because he’s just never interested me that much as an actor. That might be my own fault, since I’ve really only seen the major entries in his filmography, but I found him to be a bit of a wet blanket in Dick Tracy. He’s not bad. He just looks a little lost and distracted, as if he walks into every scene forgetting why he’s there. And then since the other performances are so goddamn loud, he ends up coming off sleepy! He’s posturing, putting on, and I never believe it. I’m not even saying that he’s wrong for the character, necessarily, but it never feels like he has the requisite edge to embody it entirely. That could be as much in the writing as anything else, though. He’s a straight man with very little emotional latitude. Overall, I just think a different actor may have severed him better. It’s not the end of the world.

Adam: Did you notice this movie is obsessed with food?

Rob: “Is it time to eat yet?” “When do we eat?” “Get him a doughnut, Mikey!” What the hell? Aside from sex with Madonna, this movie has very little else on its mind. Can we talk about her for a second? You guys mentioned on your podcast that she was distracting and took over the movie to an extent, and I agree that she’s a real problem. Not her acting, necessarily, but the fact is that she just doesn’t belong in this movie. Her character — even when fully revealed — isn’t ever an important part of any story. She’s window dressing. Plus, she wouldn’t shut up about how great her lady parts were! I was like, come on, Madge! This is a Disney film! Single entendres only! 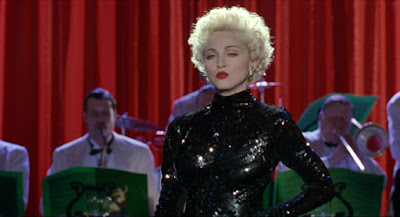 Adam: By the time she’s saying “What a cute little boy” to The Kid, it’s parody. She’s so sexual that there’s a numbing effect to her performance. It’s like too much CGI if CGI were double entendres. I think the movie stops cold whenever she’s on screen, and I’m a fan of Madonna usually. I’ll tell you who stops this movie hot: Al Pacino! I’m not sure if our hero worship of the guy is coloring my opinion of his work in Dick Tracy, but man is he fun in this movie. He THROWS himself INTO IT! My favorite aspect this time out was his constant quoting of leaders and thinkers like Abraham Lincoln and Friedrich Nietzsche. Considering he’s a mid-level boss who’s making a play of consolidating organized crime in the city and taking over (just like Michael Corleone), it’s funny that he’s like the guy who reads a lot of business books and puts up Sun Tzu quotes in his office. Where does this rank for you in the Pacino performances we’ve watched over the past year?

Rob: It’s hard to judge because it’s like comparing apples, oranges, bananas, tire irons, lampshades, and barracudas. I think this is the most over-the-top we’ve seen him go so far in this series, though, and he couldn’t have picked a better time. We were joking over text about his double duty as a dance choreographer. Don’t you want your own spin-off of that? I at least want to see the dailies to get a sense of how long Beatty let that bit go on.

Anyway, there are situations in which I understand why people would find Out There Al to be too much, but this isn’t one of them. I was watching Dick Tracy and imagining him thinking, “This is why we’re here, right? Why isn’t anyone else going for it? Fine, I’ll do it myself!” We talk a lot about the lessons that studios learned from The Dark Knight or the Marvel movies (usually the wrong ones), but it’s crazy to see what got stirred up in the wake of Batman in the ‘90s. Prestige actors came into these movies looking to steal the show, and Al does his job. The only thing that made me laugh later on was the idea that the longer he was in that facial prosthetic, the less he needed it. I wanted to see him will his face into that shape on its own through sheer acting prowess. 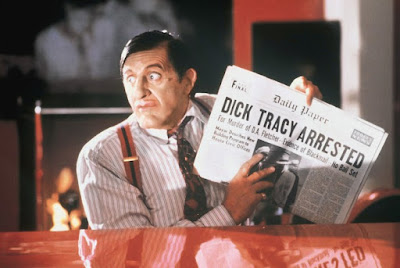 Adam: He’s a goddamn prince. The last thing I had for us to discuss was the makeup and the various personalities of the gangsters populating the film. Did you have a favorite design? If one of them could have their own shared universe spin-off, who would you want it to be?

Rob: In terms of character design, it’s hard to argue for anyone other than William Forsythe’s Flattop. I wish they’d gone a little further, honestly, and added more exaggerated character designs like him and Pruneface (R.G. Armstrong). I think the added camp factor might have helped give those characters more definition and “leaned into the bit” of the movie a tad more. As for spin-offs, what about Dick Van Dyke’s corrupt district attorney? We’d just follow him to parking lots and cemeteries around town, taking bribes and scowling at the moon. Maybe he’d have some pie at the diner.

Adam: The makeup makes William Forsythe look less scary somehow. I like your spin-off pick. Mine would be Mike, the guy who runs the diner. Can you imagine the clientele of that place? You’d probably have Big Boy, Itchy, Flattop and a few lounge singers crammed into a booth yelling for late night breakfast skillets thirty seconds after they ordered them. It would be like the Jamie Foxx diner scene in Baby Driver for the rest of Mike’s life. 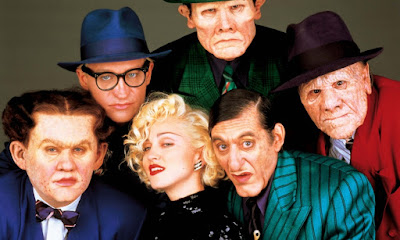 Rob: Or Terminal, that Margot Robbie movie that only I’ve seen. This is one of those times when our discussion of the movie has made me like it more. The Reserved Seating Bump! I can’t defend it from an honest critical perspective, but I think I’m going Mark Ahn on Dick Tracy because I got a kick out of Al and it made for a fun discussion.

Adam: Mark Ahn for me as well. Next week, we’re back with our penultimate baseball movie review of the season, the 1989 comedy classic Major League. Also, this marks the end of year one of Reserved Seating Goes All Pacino. It’s maybe the best idea we’ve ever had. I can’t wait to dive into more of his filmography.

Rob: It’s been my honor, buddy! I think our shared Pacino love has really helped shape Reserved Seating into its best possible form. Until next time…