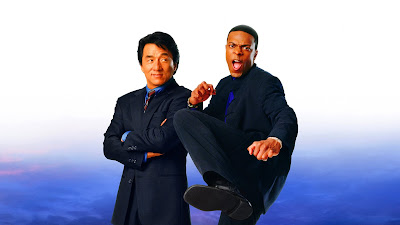 Rush Hour is an interesting trilogy. When it premiered in September 1998, both Jackie Chan (Rumble in the Bronx, Jackie Chan’s First Strike) and Chris Tucker (Friday, Money Talks) had built up a successful resume with New Line Cinema. Rush Hour was the next step to take them from niche audience favorites and into something more mainstream. By that I mean two things: 1) it was a massive hit that grossed $141M domestically (the previous top earner in North America for either actor in a lead role was Money Talks at $40M) and b) it’s a movie that even played to Rabbis. I’m serious. The second time I saw Rush Hour, I was in a packed theater and I ended up seated next to my Rabbi (he liked it). It was the type of movie you could recommend to anyone. 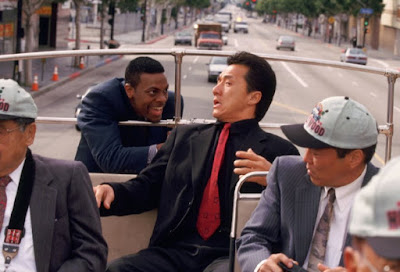 Outside of Freddy Kreuger, Rush Hour had practically all the New Line trappings: martial arts, appreciation of African-American and Asian culture, a hip-hop/R&B/rap soundtrack, etc. When you take that identity and personality and build the tried-and-true buddy cop action comedy formula around it, you get Rush Hour. The movie holds up nicely today, but in 1998 it was really a breath of fresh air. It felt new, hip, fun, and lively. Both Chan and Tucker were playing their roles like they had something to prove. It hit all the marks – as a comedy it was funny, as an action movie it had great stunts and fight sequences, and the duo had the type of chemistry that surpassed the usual buddy movie pairing. Jackie Chan and Chris Tucker seemed ecstatic about being on screen together. If in real life they didn’t feel that way, they are even better actors then I gave them credit for. As audience members, we were having fun because they were having so much fun.

Another reason the movie succeeds is because both actors can alternately play the wild card or the straight man, depending on what’s called for in the scene. This happens more in Rush Hour 2, but for all the motormouth calories Chris Tucker burns joking around, often the biggest dialogue-driven laughs come from Jackie Chan’s timing. Conversely, it’s great to see Chan do his thing in the action sequences, but there’s a little extra enjoyment I get when I see Chris Tucker clumsily fight his way out of trouble. Much credit for the original Rush Hour’s success should go to screenwriters Jim Kouf and Ross LaManna, because they give the movie a solid foundation. The case is treated with actual importance, so it feels like a story and not some bullshit Ride Along free-for-all. It surprised me in this most recent viewing how many scenes Rush Hour are not going for jokes, but instead dealing with interpersonal relationships and driving the story forward. It’s also enjoyable to look back at how solid of a supporting cast Rush Hour has, some of whom had not broken out yet (Tom Wilkinson, John Hawkes), some who were popular character actors at the time (Elizabeth Pena, Chris Penn, Phillip Baker Hall), and other familiar faces you’ve seen in dozens of movies but maybe couldn’t place by name (Tzi Ma, Ken Leung, Mark Rolston, Rex Linn, Clifton Powell, Barry Shabaka Henley). Rush Hour is a great nostalgic revisit. It reminds me of when New Line Cinema was the New Line Cinema I grew up loving. 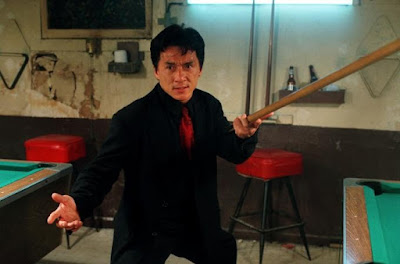 Rush Hour 2 is what happens when your first movie is a surprise hit – everything gets bigger. The budget almost tripled, you pick up co-stars who are hot commodities elsewhere (e.g. Zhang Ziyi from Crouching Tiger, Hidden Dragon), and your movie is seen as a studio tentpole that needs to hit its marks instead of re-inventing the wheel. Rush Hour 2 picks up Chan and Tucker’s characters (Chief Inspector Lee and Detective Carter) immediately after the events of the first movie as they take a breather in Hong Kong. While there, they get wrapped up in a case that ties into Lee’s past. I still enjoy Rush Hour 2 (the first bamboo action sequence is great, it has the best villains of the series, Chan & Tucker are still having fun), but it’s where cracks in the foundation start to become visible. For every five good jokes or action beats, there’s an instance of Tucker’s Carter exhibiting ugly American abroad behavior where his ignorance is supposed to be charming, but it comes across as…well, ignorant. When the movie returns to the U.S. for its climax in Las Vegas, there’s a whole bit where Tucker (as a diversion for Chan) accosts a casino dealer (played by Saul Rubinek) for being racist. It’s a weird, uncomfortable sequence and an early indication of the vileness we’re in store for with Tucker’s character in Rush Hour 3. This leads me back to my headline: the Rush Hour trilogy is basically the rise and fall of Detective James Carter. Just like Detective Mike Lowery (Will Smith) in Bad Boys II, Carter goes from a play-by-his-own-rules rebel to a fascist where he and his friends are awesome and everyone else is there to be disposed of, sexually harassed or mocked. By the end of the third movie, Tucker could strut his way onto a Michael Bay set with ease. Of the duo, it’s mostly Chan who finds a way to make Rush Hour 2 still work. 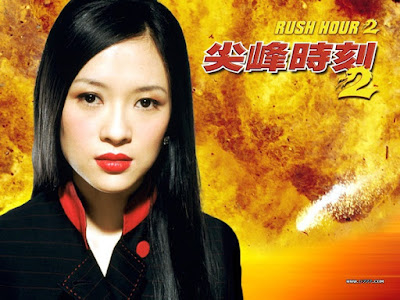 Rush Hour 3 does almost everything wrong and it’s where the hubris and questionable taste of Chris Tucker and director Brett Ratner collapsed in on itself. The first big problem the film makes is to start with Lee and Carter mad at each other despite their chemistry being the glue to the series. When you find out why they had a falling out (Carter accidentally shot Lee’s girlfriend), it’s bizarre and pretty much a deal-breaker for their relationship if treated seriously. The fact that Tucker keeps treating it like it’s not a big deal is deluded. The second problem is the film rehashes the plot of Rush Hour 2, except instead of Lee seeking revenge against his father’s corrupt former partner it’s Lee’s orphan brother who became an assassin. Who cares? The third problem is all of the movie’s tangential grossness: there’s Carter weight shaming a woman in the opening sequence, the anecdote we hear about him jailing Iranian students he decided were terrorists, when he goes backstage at a weird Dick Tracy burlesque show and demands the women strip out of costume for his inspection, a fucking Roman Polanski cameo where he gives Lee and Carter a cavity search, and a gay panic scene after a woman Carter made out with is revealed to be bald. That’s not all, either. Maybe the weirdest instance is the French cab driver character named George (played by Yvan Attal) is introduced saying that he dislikes Americans because they’re all violent, then is held at gunpoint by Carter and forced to sing the National Anthem (thus reinforcing his theory), but one scene later is on the side of Tucker’s character and becomes a boorish American “patriot” himself. The whole movie is like this and it ends the once enjoyable franchise with a thud. If you are reading this and think I’m overreacting that’s fine, but the first Rush Hour didn’t need it to be good movie, so why does Rush Hour 3? 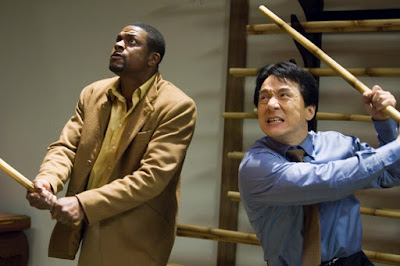 I’m presuming everyone involved making it didn’t envision Rush Hour 3 as the end of the series because there are no moments of closure or growth for Lee and Carter’s relationship in the series. They are just not mad at each other anymore. Rush Hour 3 disappointed critically and financially (it grossed less than the previous two installments and cost more than both Rush Hour 1 & 2 combined) and (despite sporadic rumors of a fourth installment) put a nail into the grave of a franchise that grew out of control through ego, money, and studio expectations. Perhaps that’s the fate of every buddy cop series. It also happened with Beverly Hills Cop, Lethal Weapon, Bad Boys and Men in Black. I’ll leave you with this: last year I went to see Chris Tucker perform stand-up. A large part of his set was him naming titles from his filmography and expecting the audience to applaud in appreciation, followed by him saying something like “Do you want us to do Rush Hour 4? I could use the money.” The underdog became the cool kid became the bully became the guy at the high school reunion who desperately wants you to remember he was once prom king. I think I’ll pass on Rush Hour 4. I’d rather have my positive memories.

Did anyone ever watch the TV series?