Songs I Love from Keanu Reeves and/or Winona Ryder Movies 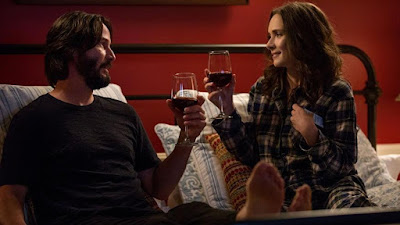 Because they might accidentally be married and the release of Destination Wedding.

Wow! Dennis Quaid is having the time of his life in this video. It was like that, too, when I saw his band, Dennis Quaid and the Sharks, perform at a nearby concert recently. He ran out into the crowd to high-five people during the second song (you gotta save that for deeper in the concert, DQ). I didn’t stay for the whole set because the music was just okay, I wanted a funnel cake, and there were no fire effects (which is my favorite part of this video). This song rules, though. When Great Balls of Fire! came out in 1989 it was one of those grown-up movies I watched a lot because it was on cable and not rated R. I remember the film being boring, but I liked this song so much that I used to kick my bedroom wall while singing the chorus before going to bed (I was seven). I think my parents thought it was funny, but I might not be recalling the event correctly.

Song: “The Shoop Shoop Song (It’s in His Kiss)”
Artist: Cher
From: Mermaids

I remember seeing this movie in theaters with my family and never being more bored in my life. Mermaids was playing in an auditorium right next door to Edward Scissorhands and I was dismayed that I couldn’t just walk out and watch a better Winona Ryder movie. But alas, I could not. I don’t like this song (this version to be more specific) or Cher music, but where else will you ever see Winona Ryder and Christina Ricci dancing to a ‘60s pop song in black & white? Whose idea was it for them to start tagging a wall at the end of the video? I bet it was Ricci.

Song: “Nobody Rides for Free”
Artist: Ratt
From: Point Break (1991, aka the only one that counts)

First things first: this video does its job by showing copious amounts of Point Break clips. The song itself takes a while to get warmed up, but then at the 1:40 marks it’s “BOOM! This is why I’m here!” I know it’s not their song and it’s for a different movie, but I would have stuck around after this music video if Ratt went straight into a cover of “Cry Little Sister.”

It takes 1:13 before Slaughter (whom I’m impressed is still around) gets into the song proper…they know this is a music video and not a concert, right? Also, you don’t interrupt people watching It’s a Wonderful Life. I don’t care if you are bothering that kid in the Charlotte Hornets Rex Chapman (#3) jersey or those stuffy suits in their board meeting. That’s no big deal. It must be value-added and not value-subtract, Slaughter! P.S. I used to really want Ted’s smiley-face jacket shown at the 1:17 mark back in 1991. Station.

This is the type of song where I’d say I don’t like it if someone asked, but if no one was looking I’d close my eyes as I listened to it, so I could let it in that much more. Annie Lennox as a vampire is scary (the eyes are what do it). I guess that’s the goal, though, so (raises goblet) “My compliments.” This song feels made to win an Oscar. Checking…not even nominated. That sucks. Heh, vampire joke. I need to rewatch this movie during October. I’d like to think this song was playing as Keanu & Winona accidentally got married shooting Bram Stoker’s Dracula.

I like this Big Mountain cover more than the Peter Frampton original for sure. The thing I love immediately about this video is it starts with a man playing saxophone on a big mountain. It’s saying right away “Are you in or are you out?” Well, Big Mountain…I’m in! I love the part at the 1:43 mark where there’s a fiddle (?) and smash cut to Winona Ryder all “Oh, hello.” Why does she like Troy (Ethan Hawke)? This video would be even better if it ended with Troy getting dumped by Lelaina (Winona Ryder), changing his name to Jesse and buying a Eurorail ticket to reveal a Reality Bites-Before Sunrise shared universe.

Song: “Rock is Dead”
Artist: Marilyn Manson
From: The Matrix

I listened to The Matrix soundtrack a lot back in 1999 and this song was my favorite track on that album. This isn’t one of the best Marilyn Manson music videos, but I do like the spit-take at the 2:04 mark. If I were a rock front man, I would totally do that during my concerts using lemonade because I really don’t like lemonade. The spit-take would be huge because it would be me saying nonverbally “Fuck lemonade!” This might not make sense to anyone other than me, but doesn’t The Matrix (in the clips) look better aesthetically in this video than in HD? It has a lo-fi, warmer look to it here that I like more than the cleaner, brighter transfer I’m used to seeing on television.

I want to go to a rap-baseball game! This song is immediately dated when Lil’ Bow Wow says they call him “little Sammy Sosa.” Pick your heroes more carefully, kid. Wait…Sammy Sosa was in Hardball? I forgot all about that. I need to rewatch Hardball. P.S. That pitch at the 2:15 mark is bullshit. This video would be vastly improved if Keanu did a walk-through/double take.