I talked to a few people at last weekend’s Fest for Beatles Fans, and concerning this film’s fiftieth anniversary, we could all agree on one thing…

… it was well-nigh impossible to catch Yellow Submarine in a theater last month when it was rereleased “for one night only.” That’s how little advance notice was given and how poorly the screenings were advertised. (It sometimes seemed as if this theatrical re-release was some sort of contractual obligation, and the parties responsible didn’t really want anyone to see it, lest word would get out about this terrific little film!) When I did manage to find where and when it was playing in my area, loyal Beatle-maniacs sold out the first screening and the theater wisely added a second screen, which also promptly sold out—but not before I grabbed a seat. Abramorama and Universal Music Group really should have played it for a week or more. 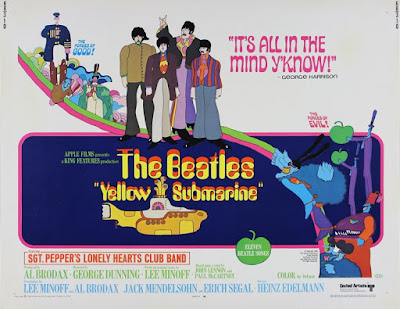 The Yellow Submarine film has an interesting provenance. After the critical and commercial success of A Hard Day’s Night, United Artists signed the Beatles to star in two more films. Help! came out in 1965, and many, many other projects were considered for the Beatles’ third film. Playwright Joe Orton was engaged to adapt his work Up Against It for the Beatles. They passed. A Western called A Talent for Loving, starring Ringo with the other Beatles playing smaller supporting roles, was considered and then rejected. The Beatles even briefly toyed with making… The Lord of the Rings. I’m not making this up. John would play Gollum, Paul would play Frodo, George would play Gandalf, and Ringo would play Samwise. Alas, they could not secure the rights, which is a bloody shame because the Beatles wanted Stanley Kubrick to direct!

Enter Al Brodax, who had supervised the Beatles’ Saturday morning cartoon show in the United States. Brodax suggested that an animated film, with limited actual Beatles participation, would be an excellent way of fulfilling their contract with United Artists. The Beatles, who were then preparing to visit the Maharishi Mahesh Yogi in India, readily agreed. They would only have to supply four new Beatles songs; the rest of the soundtrack would use older Beatles songs, the majority of which came from the group’s two most recent albums, Revolver and Sgt. Pepper’s Lonely Hearts Club Band. 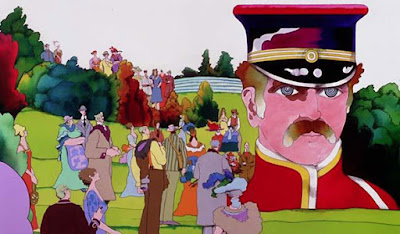 The Plot in Brief: The Blue Meanies invade Pepperland, an unearthly paradise. The Meanies are opposed to all joy and all music. The Lord Mayor of Pepperland sends Young Fred to get help in the film’s titular vehicle. Fred ends up in Liverpool, where he enlists the aid of the Beatles. After a circuitous trip back to Pepperland, the Beatles lead the charge to defeat the Blue Meanies. I won’t spoil the outcome, but I will say that at the end of the film the Beatles invite the Blue Meanies to join everyone in Pepperland to live in peace and harmony. The Chief Blue Meanie admits that his cousin “was the bluebird of happiness.”

AN ANNOYING AUTOBIOGRAPHICAL PAUSE: When I was a lad, the only way to see Yellow Submarine was its once-a-year airing on local WGN-TV. Because VCRs had not yet been invented (I am old) I set up my family’s tape recorder in front of the TV speaker and recorded the soundtrack onto cassette. I even mindfully paused the recording during the commercials. I listened to that cassette so many times during my misspent youth that I memorized the film. I can perform the entire movie from memory, even doing all the voices (badly) to boot. Some rainy night after I have had some adult beverages, ask me to perform it for you and I will gladly comply. (Editor’s Note: Please do not.) Yellow Submarine’s script is full of word play, puns, and references to Beatles songs, something I had always ascribed to the fact that Harvard professor (and author of Love Story) Erich Segal worked on the script. On the most recent DVD release, however, production supervisor John Coates states on the commentary track that many of the best lines were written by Liverpool poet Roger McGough, who did a last minute, un-credited script rewrite. Here is a sampling of my favorite dialogue from the film:


Paul:
Look, it's a school of whales!

Ringo:
They look a little bit old for school.

John:
Must be a "bicycle-ops" then.

Ringo:
There's another one. 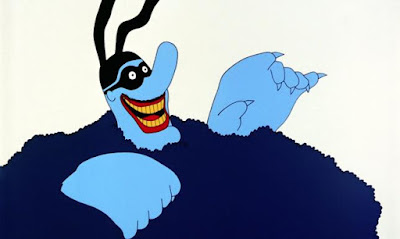 Ringo:
I don't blame it. Must be very tiring being time, mustn't it?

Ringo:
Well, it's a twenty-four hour day, isn't it?

John:
You surprise me, Ringo.

Ringo:
Hey, I wonder what'll happen if I pull this lever?

Young Fred:
Oh, you mustn't do that.

Some viewers are disappointed upon learning that the real Beatles did not provide their own voices for the film. Voice actors were used, but they really caught the distinctive qualities of the respective Beatles’ voices. John Clive played John, Geoffrey Hughes played Paul, Peter Batten played George, and Paul Angelis voiced the Narrator, the Chief Blue Meanie, and Ringo. True story: halfway through production, military police showed up at the film’s studio offices and arrested Peter Batten for deserting the English military. Paul Angelis voices George in the second half of the film. 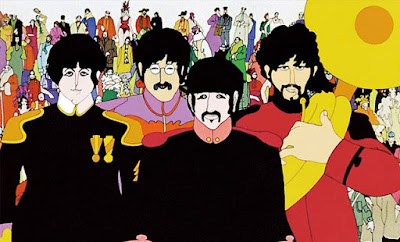 Seeing Yellow Submarine for the first time in a real movie theater, I noticed several things. As an adult viewer, I was struck by how cleverly the film sometimes hides its corner and cost cutting, since it was made very quickly on a limited budget. In the “Sea of Science” sequence, an oscilloscope fills the screen in place of pricey hand-drawn animation. During the delightful “Nowhere Man” sequence, the Beatles sally forth on a blank canvas, gesticulating and creating a psychedelic backdrop of flowers behind them. For the second half of the number, the sequence is simply reversed—they march backward, “erasing” the flowers… and requiring half of the actual painstaking, hand-drawn animation!

The film’s colors and animation are beautiful and eye-popping to behold on a big theater screen. Many children were at my screening, and the film held their attention; they were transfixed by it and even sang along to some of the songs. It was so nice to see the “Hey Bulldog” number (which was missing from US prints for decades because the goddamn American distributor cut it for time) reinstated into the movie (as it has been since the restored DVD was released in 2012.) The soundtrack remix performed for the Blu-ray release sounds loud and special in a movie theater. I was surprised by how much easier it was to hear and notice all the changes to the placement of instruments and the employment of the film’s sound effects on the surround channels. Again, this is a soundtrack I am intimately familiar with, and I felt as if I was hearing it for the first time. 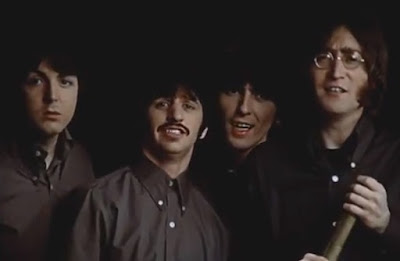 BUT WAIT! THERE’S MORE: Next Sunday, August 19th, the Marcus Theater chain nationwide will be screening Yellow Submarine one last time. This is your chance to see this film as it was meant to be seen. The newish (not blueish) 5.1 remix sounds spectacular on a movie theater sound system. Take all the children you can gather together; they will love you for it. You have been warned! No excuses! A splendid time is guaranteed for all.