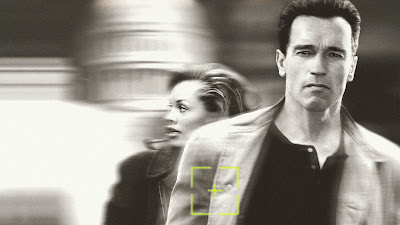 1996's Eraser marks the end of the classic Schwarzenegger period that began in 1985 with Commando. While it's not the last time he would make this kind of big, expensive action movie, it is the last time the classical spirit of his early work (that's right, fight me) is captured in any real way. The writing was on the wall, and even Schwarzenegger could see it; the very next year, he began experimenting with the kinds of movies he would make. His appearance as Mr. Freeze in 1997's Batman & Robin (learn it well, for it is the chilling sound of your doom) marks the first time since breaking out in the early '80s that Schwarzenegger was part of a bigger machine and not the machine himself. The cinematic landscape had completely changed by the late '90s, leaving little room for the kinds of action stars of just 5-10 years earlier -- the kind that Schwarzenegger himself helped usher in. He started to work in established genres like horror and sci-fi, and while he had made genre movies before, it always felt like the genre had come to him. By 1999/2000, it was the other way around: he was making movies where the genre was the star, not him. Varied in quality as these later-period movies may be, it was all too little, too late. It's hard to get worked up about a Schwarzenegger-does-horror vehicle like End of Days the same year that The Matrix was released. The game had changed. 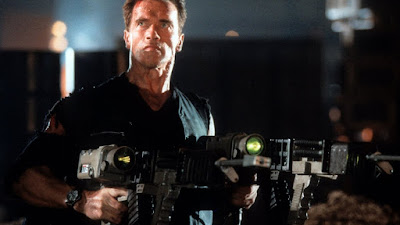 Eraser came during that weird transitional time when the superhuman action stars of the '80s were just getting phased out in favor of more grounded heroes like Keanu Reeves or Harrison Ford in Air Force One. It's the last gasp of Schwarzenegger excess -- and, under the direction of Chuck Russell (A Nightmare on Elm Street 3: Dream Warriors and 1988's remake of The Blob [#blub]), it is very, very excessive. While Schwarzenegger was just starting to fall down the ladder, Chuck Russell was on his way up: his 1994 Jim Carrey comedy The Mask was a colossal hit, and Eraser finds him cashing in that clout to make a $100M big studio blockbuster for the first (and pretty much only) time. He's a guy who loves genre movies, having gotten his start in that world, and his best movies all lean really hard into those aspects of whatever genre he's working. When it's The Blob, he's going to go really hard at the effects and bring some of the goriest, gnarliest, and coolest stuff we saw on screen in the '80s. When it's Dream Warriors, he's going to work overtime to create bigger, more imaginative nightmares than had yet been seen in an Elm Street movie. When he's making star vehicles like The Mask or The Scorpion King, he's going to make movie stars of his lead actors while still servicing the genre aspects of those respective films.

That makes Eraser something of an anomaly in his filmography. He's making his first big action movie and certainly delivers on the action, which is big and violent and ridiculous. But he's also making an Arnold Schwarzenegger vehicle, and that's where Eraser doesn't work as well. There are plenty of reasons for this, none of which can really be laid at the feet of Chuck Russell -- the screenplay (credited to Walon Green and Tony Puryear, from a story by Green, Puryear, and Michael Chernuchin) is pretty bad, and Schwarzenegger was starting to show signs of wear, sometimes ill-suited for the movie's set pieces. If Eraser marks the beginning of the end in Schwarzenegger's career as an action hero, it kind of feels like it. 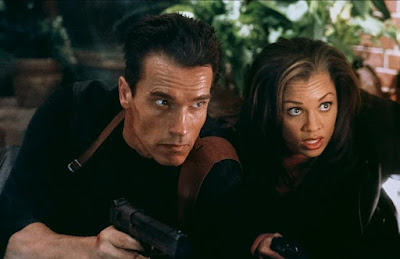 Oh, right, the story: Arnold is John Kruger, a U.S. Marshal whose specialty is "erasing" the lives and identities of people in the Witness Relocation Program. He is assigned to protect and erase Lee Cullen (Vanessa Williams), who has discovered that her defense contractor employers have plans to sell an insanely powerful new gun (called a rail gun) on the black market. She has become a target for all kinds of bad people, including Kruger's own colleagues in the U.S. Marshals -- most notably his friend and mentor DeGuerin (James Caan), who brings as many corrupt government and military personnel down on Kruger and Lee as he can. People shoot at each other. Other people are eaten by alligators. Danny Nucci shows up but fails to bring his Italian accent. Much erasing takes place.

Watching the oversized and violent action of Eraser in 2018 is a shocking reminder that this is what action movies used to be like before they all surrendered to the homogeny of PG-13 pre-vis. Once upon a time, #HeavyAction was the realm of the R rating, which this movie fully embraces: bodies are shot, stabbed, broken, blown up, eaten, and destroyed just about any way you can think of. Russell brings some of his horror movie energy over to the violence of Eraser, resulting in a movie that's positively enthusiastic about committing carnage and recalls the nastiness and brutality of early Schwarzenegger efforts. There's a giddiness to the action that comes through here, like Russell is excited and embracing the opportunity to shoot a big action movie but wants it to stand apart at the same time. The rail guns are a great example of this: where regular action films are happy to shoot up bad guys with machine guns, Eraser launches them up in the air and 50 feet across the room, pinning them to the wall before killing them. This movie's dick is bigger than yours. 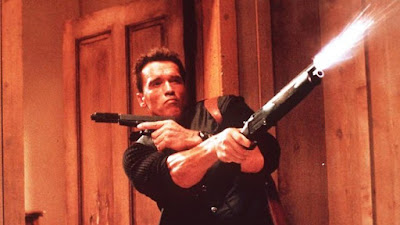 In much the same way that Eraser straddles the line between the past and present of Schwarzenegger's movie career, it also straddles the line between the analog and the digital when it comes to how the action beats are created. Schwarzenegger had obviously worked with visual effects before: Predator, Total Recall, and Terminator 2 offered some of the best the genre had seen to that point. But those were effects designed to create science fiction worlds -- to make the impossible possible. What's unique about Eraser is the way that it incorporates visual effects to do more "realistic" stuff (by action movie standards, I mean), whether it's the way the rail guns shoot or the airplane sequence (more on that soon) or the scene in which the bad guys are attacked by maneating alligators at the zoo. The gators are CG creations, and further proof that those effects just weren't there yet in 1996, but it demonstrates how Chuck Russell was really trying to push some of the language of action cinema forward and offer things we really hadn't seen before. These days, computers are used to complete even the simplest action sequence in every film to the point that, in the case of something like this summer's Skyscraper, there's hardly a trace of the real world left.

The movie's best action sequence -- probably the centerpiece of the entire movie -- involves a shootout and escape from a private jet after Schwarzenegger realizes James Caan is corrupt, a fact he should have put together the day James Caan showed up on set. It, too, functions as a microcosm of everything that is good and flawed about Eraser, both a highlight real of Schwarzenegger's superhuman otherness and a misunderstanding of what is best about him as an action star. We get to see him rip the door off an airplane, then rip out a seat and throw it directly into the engine so it will crash and kill the people on board. Not his problem: he's hanging outside the plane and then free falling through the sky until his chute opens, at which point the plane turns around tries to ram him in the sky. It's probably the biggest and most ridiculous sequence in a Schwarzenegger film this side of True Lies. But watching the free fall footage, a combination of obvious stunt double and Schwarzenegger photographed in front of a green screen, reminded me that we don't go see his movies to watch him do stunts; for as much as his sizable bulk is a major factor in his action movie stardom, his actual physicality has never been a big part of the draw. Maybe it's because I still have Mission: Impossible: Fallout on the brain, but the sort of stunt work that has become that franchise's stock in trade feels totally out of place here. It's not Arnold's brand.

Everything after the airplane and zoo scenes falls off somewhat, probably because the story becomes far too dependent on the participation of Robert Pastorelli (RIP) as one of the people Kruger "erased" earlier in the movie. He's too much comic relief in a movie that can't support it. In fact, Eraser is strangely humorless for a Schwarzenegger movie, except for all of the attempts at comedy that fall completely flat. Besides Pastorelli showing up from a different movie, every one of Schwarzenegger's one-liners is awful and not in the usual self-aware way. He shoots an alligator and says "You're luggage." Groan. He kills someone by stalling their car on the tracks so that it's obliterated by a locomotive and then says "He had to catch a train." Groan. The worst, though, is when he appears at the last minute to save Vanessa Williams and she says "You're late." His response? "Traffic." GROAN. Seriously, "traffic?" That hack shit should have been retired after the last scene in The Player. You have no excuse, Eraser.

I'm sure it's an overstatement to call Eraser the exact midpoint of Arnold Schwarzenegger's action movie career, but it really is the film that's not as good as most of what came before it but better than almost everything that came after. I can feel Schwarzenegger trying to hold on to his Number One status and remain relevant, but it's really Chuck Russell who gets the movie across the finish line with his enthusiasm and his desire to make an action movie that's just a little bigger and more outrageous than most of the stuff coming out around the same time. The good parts in the movie movie are good enough for me to gloss over the parts I like less, and while it's not the best that Classic Schwarzenegger has to offer, it's not a bad swan song.