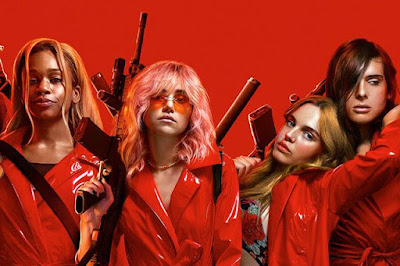 I guess this is going to be the great 2018 movie that everyone sleeps on.

I only saw a single trailer for Assassination Nation, the new high school satire written and directed by Sam Levinson. I thought it looked slick and trashy and very, very snarky, like Heathers but updated for a generation used to social media and school shootings. And it is that movie, in a way, particularly in the opening moments when it flashes through a list of "trigger warnings" of all the stuff in the movie that's sure to offend or upset people. The montage rubs our noses in all the transgressive outrageousness we're promised over the next two hours and I steeled myself for some Joseph Khan shit. That the movie is something much greater and far more sincere was a happy surprise. That it wound up being one of my favorite movies of the year completely blindsided me. 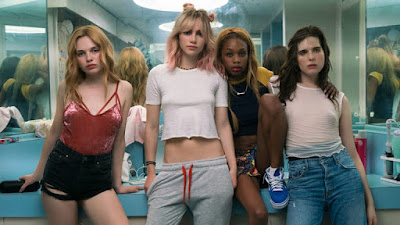 Lily is your typical high school girl. She has a boyfriend (Bill Skarsgård). She has her best friends: Beks (Hari Nef), Sarah (Suki Waterhouse), and Em (Abra). She lives on her phone, posing for suggestive selfies and messaging with an older man she refers to as "daddy." When some high-profile figures in her small town have their phones hacked and all of their private information made public, people begin to grow angry and mistrustful as a kind of mob mentality begins to form. Eventually, though, more and more phones are hacked and a couple of teenage girls are blamed for all the evils in the world. Things fall apart pretty quickly. Accusations are made. Weapons are gathered. Blood is shed.

There is so much about this movie that makes me sad about the world. Some of it has to do with what young people have face today, although Assassination Nation rarely editorializes on the perils of youth. It's frank and honest in a way that most movies aren't, never talking down to its characters or its audience. These are kids who know a lot about sex and sexuality but are also expected to navigate it in a way for which they still aren't prepared. They mock and shame one another for every little thing and yet are largely accepting of Beks (until they aren't), a trans girl refreshingly played for a change by a trans actress. As the film continues, what this is all really about comes more and more into focus, and while very little of the commentary on misogyny and toxic masculinity in many of its various forms is anything new, the film expresses it with such bold assuredness that it totally lands. Who could have guessed that the movie that opened with a bunch of bratty trigger warnings would be so passionate, so rousing, even so inspiring? 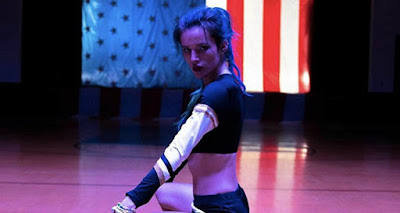 I'm blown away by how confidently made Assassination Nation is. I had seen Sam Levinson's previous film, Another Happy Day, when it was released in 2011. I don't remember much about it except that it was a pretty familiar dramedy about family dysfunction. There's nothing I recall in that movie that prepared me for the gorgeous, ambitious formalism of his follow up. There are sequences in this movie that are almost breathtaking in their construction, whether it's an extended three-way split screen during a party or a single take tracking multiple rooms in a house from outside (it might even supersede the one in Tenebrae, but Argento took his camera up and over the roof and didn't have the benefit of computers). The film is bursting with color and energy and life, stylized in such a way as to both underscore a certain heightened reality and to reflect the way young people -- all the stars of their very own movies they assume everyone is interested in seeing -- interact with the world. 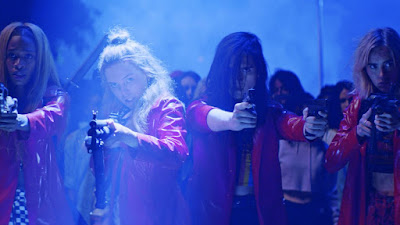 For some reason, Assassination Nation just isn't getting talked about. There weren't a ton of ads for it (that I saw). There were few published reviews the day it was released in theaters. It couldn't even crack the Top 10 at the box office this weekend, losing out to stuff like The Meg in its seventh week. It's a tough movie to watch at times -- those trigger warnings are more than just a gag -- but so well made and so rewarding that I want everyone to see it, even if you end up hating it (and you may hate it). This is the movie I'm going to be beating the drum for in the remaining months of the year and when it comes time to compile our year-end lists of 2018's best movies. Even the end credits are better than 75% of the stuff I've seen this year. If it's playing anywhere around you, I urge you to see it before it's gone from theaters, which I suspect will be very quickly. This movie is not fucking around.
Posted by Patrick Bromley at 12:00 PM