Richard: Nope. … I'll write about this weekend.
Sarah: What were you going to write about before?
Richard: Last weekend.

I have decided to forego reviewing thrilling and/or chilling metal discs this week in order to describe my latest excursion to Los Angeles, City of Monsters. I do this in a naked attempt to make readers jealous of my laugh-in-the-face-of-death, jet set lifestyle.

The genesis of this trip was simple. I missed my son. I was going to fly into Burbank Airport as an experiment, to see if it was cheaper and less of a hassle than the Bataan Death March that is LAX. Flying out the weekend of September 14th would ensure that I could see my son, who is not a monster, AND attend the annual Son of Monsterpalooza convention, which is full of monsters.

But then LA Doug, who (as his name implies) lives in California with his delightful family, informed me that he had sold his soul to the Devil and procured tickets to Hollywood’s famous Magic Castle. I have read about the Magic Castle all my life. It is impossible to get into the Magic Castle; a sorcerer must invite you. I have seen grown men melted into goo just because they broke the infamous Magic Castle dress code. (How rigid is this dress code? A week before our trip, I e-mailed the Magic Castle’s Head Sartorial Wizard a picture of my shoes to insure that they passed muster.) Doug invited us to go to the Magic Castle! Now the trip to Burbank was becoming infinitely more interesting. 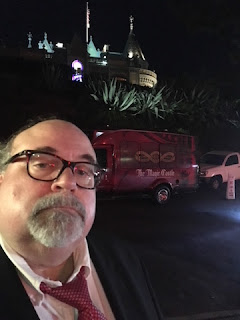 The Magic Castle is a blast. It’s like Disney’s Haunted Mansion, but real and full of magicians. It has an “invisible ghost” named Irma who “plays the piano” and takes requests. Our party tried to stump her with current rap hits, but it was no use… she knew them all! I am now convinced the Magic Castle actually has a ghost that plays piano. We ate a fine restaurant meal; we saw three magic shows. One of these featured John, a gregarious card magician. While talking with him in the bar after his show, John did a close-up magic trick from which I am still trying to recover. Not two feet from our faces, he changed Monopoly money into real money… as we watched. I saw it happen. I am a fan of magic, and this was the most amazing trick I have ever seen. I think John is an actual warlock who performs at the Magic Castle just for kicks. Thanks for inviting us, Doug and Shadia. Only more magic could magically make our already magical friendship even more… magicky.

The last time I attended Son of Monsterpalooza in Burbank, all I could do was gripe about the line. This time, I awoke early, had a lovely breakfast, and was in line at 8:30 am. Doors opened at 11:00 am. I am retired and have nothing else to do with my time! I was 25th in a line that eventually stretched around the building. I figured that getting through the turnstiles at rope-drop would afford me about an hour of walking around before the venue got too crowded. Everyone talks big about waking up early and getting there when the gates open, but very few people actually do it. IT WORKS.

But that doesn’t mean I don’t still BUY things. My favorite purchase at SOM this year was a fez. I am ashamed to say that I made it a full 56 years on this Earth without owning a fez. I put that right last weekend, thanks to the lovely people at Fez-O-Rama. They helped me find the correct size for my pumpkin-sized noggin. They let me choose from an assortment of tassels. I am now officially a “Loyal Lord of the Lagoon.” If this paragraph finds you, gentle reader, weeping over your own fezz-less (and, dare I say, feckless) existence, hie thee hence to fez-o-rama.com. Winter is coming!

NOTE TO SPOUSE: I wish to be buried in my fez. (EDITOR’S NOTE: Got it! Naked except for the fez.) 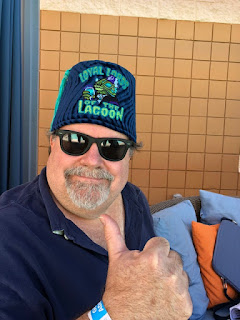 TANGENT: I saw lots of young kids at the convention and wondered about the appropriateness of the event for the pre-teen set. I certainly wish no child to be traumatized, to be dragged along by a Dad more interested in monster blood-and-gore than he is in protecting his child’s delicate sensibilities. But honestly, I saw none of this; every kid there was clearly having a ball. Many were dressed up in elaborate costumes. A precocious three year-old a few feet down from me in line was there with his entire family; when a helpful staffer handed out program booklets, this delightful moppet sat with his Dad and went through the whole book, picture by picture. He was obviously proud of all the monsters he could name, and demanded to know the names of all those he could not. He said, “I no like blood” in response to any photograph that featured any: “That Acula. I like Acula...That blood. I no like blood…That Wolfman. I like Wolfman… That blood. I no like blood.” Hey, the kid knows what he likes… and his Dad was fine with that. 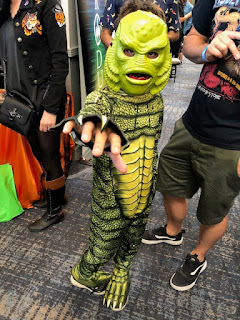 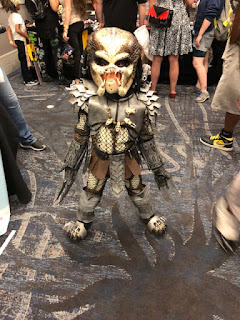 The undisputed highlight of the event was completely unplanned. Saturday morning when I was at the show, my lovely wife Jan helped a woman on crutches carry her coffee, and they struck up a conversation. (At lunch Jan said, “I made a friend! Her name is Alaine!” and told me it was the best part of her day.) Later that day Alaine introduced Jan to her husband Alec. And that’s the end of the story…

Only it’s not, because this “Alec” was actually Academy Award Winner Alec Gillis of the famous special effects house Amalgamated Dynamics, Inc. Alec wondered if Jan, Jake, and I would like a tour of his workshop.

Alec Gillis is the nicest man on Earth. 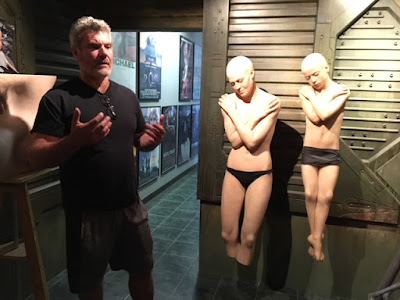 Sunday morning we made the journey to ADI and were thrilled and delighted to be taken behind the scenes of a movie magic factory. The ADI workshop was one part museum, one part laboratory, and one part Monster Kid’s dream hideout. Everywhere we looked, there were souvenirs from past productions for which ADI had supplied the practical effects. There on a shelf: Wolverine’s claws. There in a chair: a more recent prop that we were not allowed to photograph at the movie studio’s behest. Around one corner was Pennywise from the latest iteration of Stephen King’s It. To our left, a full-sized Alien fighting with a Predator; to our right, a maquette created to help with the monkey make-up application on the original Jumanji. Alec walked us through the showroom and the fabrication workshop, offering fascinating backstory and answering all our questions.

This bears repeating: Alec Gillis is the nicest man on Earth. 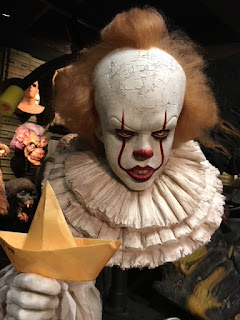 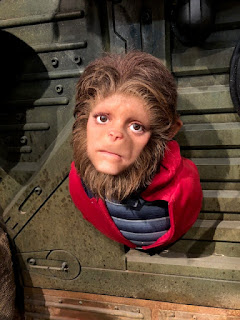 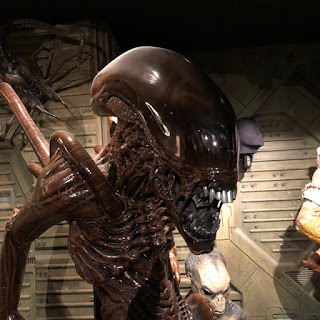 The workshop featured the last “graboid” left from Tremors, various fighting insects from Starship Troopers, villainous gigantic toy soldiers from Santa Claus 2, and even a disembodied horseman puppet from the recent Sorry to Bother You. 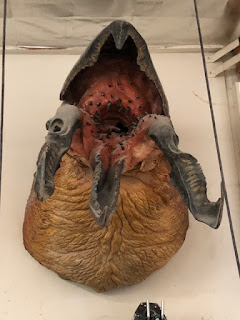 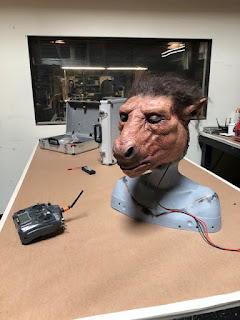 We talked about our love of practical effects. Alec said that he enjoys working on low-budget films because, ironically, those are the ones with budgets that can’t afford expensive CGI. It was obvious that Alec loves what he does and loves sharing it with those who appreciate the artistry behind practical effects. He told us about ADI’s YouTube channel, which features a plethora of behind-the-scenes videos about all the studio’s projects. WARNING: You are in for an “Alice Down the Rabbit Hole” experience if you visit ADI’s channel—it’s packed with great content. The first time I visited, I didn’t resurface for three days. Subscribe here and tell your friends! 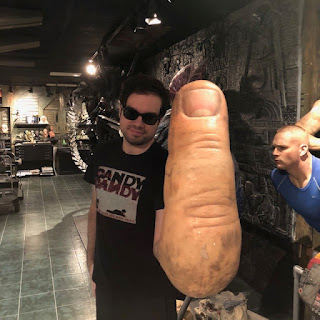 Touring ADI was like touring Wonka’s Chocolate Factory after finding a golden ticket in a decapitated head. Clearly, the convention could never top what I’d just seen; but I returned that afternoon and was surprised to find the convention more crowded on Sunday than it was on Saturday. I witnessed a live make-up demonstration with Oscar-winner Ve Neill. I walked around for a bit, revisiting some favorite vendor booths. (Sometimes I purchase a t-shirt just to reward those vendors who actually carry adult sizes with lots of XXX’s in them.) I checked out the Art Contest ballroom, and I attended a live taping of the Trailers from Hell podcast, “The Movies That Made Me,” featuring Joe Dante and Fred Dekker. Dekker’s assignment was to come up with his ten favorite “Guy In A Rubber Suit” monsters. What followed was a delightful hour-long discussion. 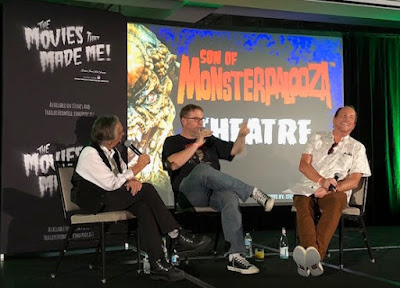 With the convention over, that familiar end-of-the-trip melancholy began to take over. Had we really already been here for three days? It felt more like three hours. Son of Monsterpalooza served as a tantalizing coming attraction for October. The weekend served to remind me of how lucky I am. I am lucky to have a wife so nice that she got us invited to the inner sanctum of special effects wizard Alec Gillis. I am lucky to have a terrific son who, among other things, drove me around for three days because I refused to rent a car. I am lucky to have terrific friends like Doug and Shadia. I am lucky that I have the time, health, and resources to take trips like these, and lucky to have readers like you to share them with.

I am goddamn lucky that I love monsters so goddamn much. 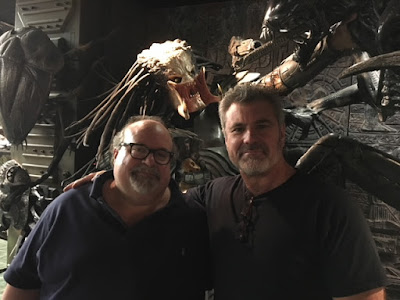 THRILLS: 100%
(Thrilling when you travel by airplane and that crazy thing actually lands.)

CHILLS: OFF THE CHARTS
(Touching some of my favorite monsters at ADI literally gave me chills.)

SPILLS: 100%
(I believe I may have spilled a little Mai Tai at Damon’s Tiki Bar.)
Posted by Patrick Bromley at 5:00 AM