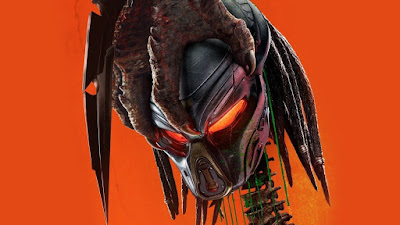 The fourth film in the Predator franchise is also the fourth best Predator movie.

If you had told me two years ago (it had to be at least two years ago) that there would be a new Predator movie that is directed by Shane Black and written by Shane Black and Fred Dekker and that I would not like it, I wouldn't have believed you. How is this possible? How do all these pieces come together and still totally blow it? This was one of the movies I was most excited about this year. Now it's one my biggest disappointments. 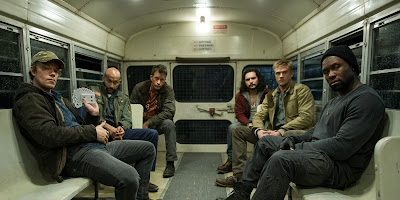 Boyd Holbrook (who you might remember from Logan, but emphasis on the "might") plays Quinn McKenna (!!), a special forces sniper whose team is wiped out in Mexico when a Predator crash lands and attacks. He recovers some of the alien tech and sends it back to his estranged son Rory (Jacob Tremblay) in the U.S. See, Rory has Asperger's, which in movies makes him magical and brilliant, so he immediately begins to figure out how to operate the Predator tech. At the same time, the government (led by Sterling K. Brown in a performance mostly defined by eating mints or something, but at least he appears to be having a really good time) wants Quinn McKenna (!!) declared insane so that no one will believe his story. He's put onto a bus with a bunch of other former soldiers branded as crazy (including Keegan-Michael Key, Trevante Rhodes, and Thomas Jane as a guy with hilarious movie Tourette's), so naturally they form a ragtag bunch keen on escaping custody, saving Rory, and taking down the Predator. Oh, and they're joined by Dr. Casey Bracket (Olivia Munn), an evolutionary biologist brought in to examine the Predator because she wrote a letter as a child (I'm not kidding) and who now is also in the government's crosshairs for knowing too much.

Phew! That's a lot of characters and a lot of plot. So what went wrong? As is more and more regularly becoming the case, it sounds like there are basically two versions of The Predator: the one Black originally shot and the one that's been released in its compromised form, full of studio-mandated changes, cuts, and reshoots. That certainly accounts for some of the messiness. It doesn't excuse it -- the movie I saw is still the movie I saw -- but at least it helps me to wrap my head around how a filmmaker whose work I have generally admired could make something so spectacularly mediocre. There may have been a better movie in here once -- not a good one, but a better one -- but we're not going to know. The insane too-many-cooks process by which Hollywood makes big tentpole movies like this has claimed another victim. 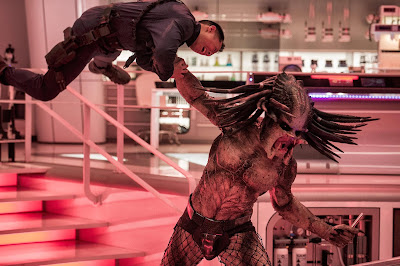 This movie is a fucking mess. I sensed it from the opening moments, which are loud and busy and full of tacky CG and poorly edited -- we're a long way from the quiet elegance of the original Predator's opening shot (or the opening shots of the other sequels, all of which are excellent in different ways). Black never feels in control of the movie: not the story, not the action, not the characters, and certainly not the slipshot and borderline incoherent editing, which again probably speaks to the movie's troubled post-production. Not even the dialogue is any good, which is especially disappointing considering it's Black's biggest strength. Instead of the fast, funny back and forth of The Nice Guys, we get characters sitting around literally explaining their personality traits to one another and guys teasing each other about being named "Gaylord," because it's 2018 but no one told Shane Black.

Nothing in the movie works. Plot threads and characters are introduced and dropped at random, the action is too expensive but feels cheap, the additions to the Predator mythology and nonsensical and almost embarrassing. The last scene, which is clearly (and now publicly) the result  of reshoots, is jaw-droppingly stupid and sets up a sequel no one could want and which this movie does not earn. I found myself watching the film and thinking "Well, at least it's cool to see a guy in a suit and that they're still doing the Predator practically," but I should have known better. The Predator quickly finds a way to fuck even that up. Olivia Munn acquits herself well, and not just because of the goodwill we have for her after speaking out against some bad choices made by Shane Black and some equally bad reactions from the studio and cast. She shows up and gives a performance even when not given a role to play, because the few things we know about her are so, so stupid. 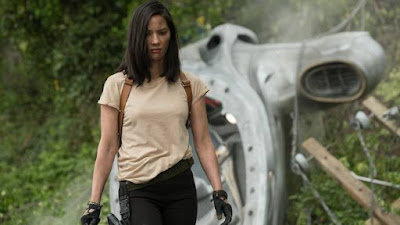 It brings me no joy to not like this movie. I've liked all of the other three films in the franchise (I don't count the two AvP movies because I need to believe there is good in the world or I'll hang myself with a microphone cord). I've been a fan of Shane Black in the past and I was genuinely excited at the prospect of him re-teaming with Fred Dekker, another filmmaker whose work I have always admired. As much as I'd like to blame the studio interference and a broken system for the film's shortcomings, I think its problems run deeper and began earlier than that. I could have used a good new Predator movie right now. Instead I got one that's wrongheaded and badly made. I guess I should have expected as much. That's the way things go.
Posted by Patrick Bromley at 12:00 PM