“Even a man who is pure in heart
and says his prayers by night
may become a wolf when the wolfbane blooms
and the autumn moon is bright.”

George Waggner’s 1941 version of The Wolf Man is so entertaining in so many ways that I suspect audiences often forget that, amidst the fur and frights, the twisted tale of Larry Talbot is at its heart a Shakespearean tragedy. In most versions, the story still catches us off guard by the time it reaches its inevitable conclusion. I remember audiences in 1982 gasping and groaning at the final shot of John Landis’s An American Werewolf in London; surely there has been some mistake. 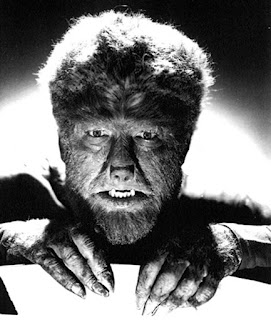 This must be especially true for modern audiences. We have become quite accustomed to the Hollywood happy ending that sends us out of the theatre with our fingers a’ snapping and toes a’ tapping, ready to recommend the film to our one friend who still sees movies in a theater. An ending such as the one in The Wolf Man will stop audiences, literally, dead in their tracks. Need further proof? Witness the shocked communal reaction to the ending of the recent Avengers: Infinity War. But in 1941, audiences didn’t have the assurance of a contractually obligated sequel to reanimate their dead hero.

The Plot in Brief: Jaunty American Larry Talbot (Lon Chaney, Jr.) returns to his ancestral home in England for the funeral of his brother. He reconciles with his estranged father Sir John (Claude Rains) and meets beautiful Gwen (Evelyn Ankers). While flirting with Gwen in her antiques shop, Larry buys a cane with a silver wolf’s head handle. Gwen tells Larry about the local legend of the werewolf. 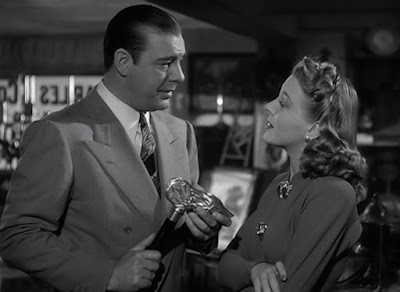 That night, Larry accompanies Gwen and her friend Jenny (Fay Helm) to a gypsy carnival. Jenny gets her fortune told by Bela (Bela Lugosi), a mysterious, troubled gypsy. Bela’s mother Maleva (Maria Ouspenskaya) is even more mysterious and troubled and tells the trio to leave immediately. On their way home, a wolf brutally attacks Jenny, but Larry beats the wolf to death with his fancy cane. Larry is bitten by the wolf but survives.

As time goes by, Larry begins to think that something is askew. With the next full moon come many mysterious changes… Is Larry a werewolf? Is Gwen in danger? What is the antique shop’s return policy on slightly used canes? 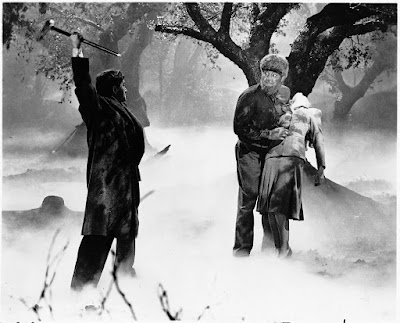 TANGENT: In the early 1990s, I had the privilege of attending a discussion with Curt Siodmak, screenwriter of The Wolf Man, at the second Famous Monsters of Filmland convention in Hollywood. Though then pushing ninety, he gave a lively, candid, and informative talk about his career in Hollywood. Siodmak said that his biggest pet peeve was that books of famous quotations were loathe to give him proper credit for the famous rhyme that opens this column. He just made it up for the film, but Bartlett’s Familiar Quotations kept insisting it was based on some “ancient Germanic legend.” I find the sad eulogy that Maleva the gypsy woman recites in the film even more beautifully written. Between the words themselves and the actress’s performance, it’s really quite effecting:

“The way you walk was thorny, through no fault of your own;
but as the rain enters the soil, the river enters the sea, so tears run
to a predestined end. Your suffering is over, my son.
Now you will find peace.”

There’s more to like about this movie than just a strong script. Because The Wolf Man was made ten years after the first string of Universal Monster films, it has never looked quite so beat up and dupey as its 1930s celluloid cohorts. The recent Blu-ray of The Wolf Man is beautiful to behold, but the film has never been an eyesore. There is so much going on in this film (iconic story, breathtaking special make-up by the great Jack Pierce, the sweeping score written primarily by Hans Salter) that it is not until you are re-watching it that you are reminded of all the terrific performances, especially in the supporting roles. Ralph Bellamy even shows up, improbably playing in a horror film the iconic role he plays in so many screwball comedies, “The Guy Who Doesn’t Get The Girl.” 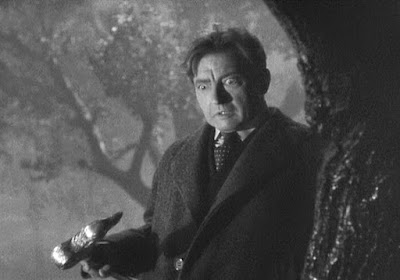 I doubt that Claude Rains ever gave a bad performance, and he is believable here as Larry’s dad, even though there is such an obvious lack of resemblance between the strapping, craggy Chaney and the diminutive, fine-featured Rains. (We can only suppose that Larry’s mother was an Amazon MMA fighter who resembled Broderick Crawford.) Rains appears here eight years after his breakout role in Universal’s The Invisible Man; he’s one year away from playing wily Captain Renault in Casablanca and only two years from playing the title role in Universal’s remake of The Phantom of the Opera.

I would say that Rains gives the performance of the film, if it were not for Maria Ouspenskaya’s performance as Maleva. In much the same way that Bela Lugosi’s performance as Dracula and Boris Karloff’s performance as Frankenstein’s Monster quickly became iconic cultural touchstones, so too did Ouspenskaya’s. In movies, television, theater, and the routines of countless stand-up comedians in the 1940s, ’50s, and ’60s (including, but not limited to, the great Lenny Bruce), her gypsy woman became THE gypsy woman, and no wonder. She brings such a realism and depth of feeling to the role, it’s a little acting class in miniature. Years ago, I learned that Maria Ouspenskaya (I spent my teenage years mispronouncing her name.) supplemented her acting income by teaching acting classes that were considered without peer.

And of course, there’s Bela. 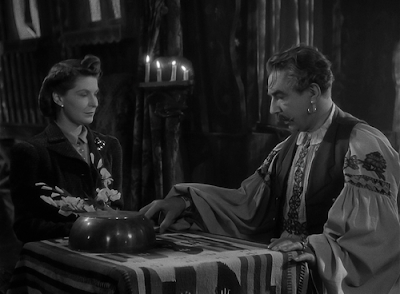 Bela Lugosi is in The Wolf Man, though only in a cameo role. Bela brings it, as he always did, and I would argue that his troubled gypsy character is argument alone against modern critics who insist that all of Lugosi’s performances were merely variations of his famous Count. Good Lord! We’ve got Bela the gypsy, Igor in Son of Frankenstein, and the “Sayer of the Law” in Island of Lost Souls… that’s range, baby. If Universal Studios really wanted to make some money in the early 1940s, they should have produced a prequel to The Wolf Man starring Bela Lugosi and featuring his character’s backstory… they could have called it Wolf Man: The Early Years, or The Phantom Wolf Man Menace, or Wolf Man Origins: WOLFERINE.

The Wolf Man is the complete package for us fevered Monster Kids. Sweeping drama, cool monsters, tragic romance, silver wolf’s head canes, and Bela Lugosi… this film has it all. There is but one week of Scary Movie Month left. We all had better watch The Wolf Man again before next Wednesday… and say our prayers by night.