A Movie I'm Thankful For: WHEELMAN 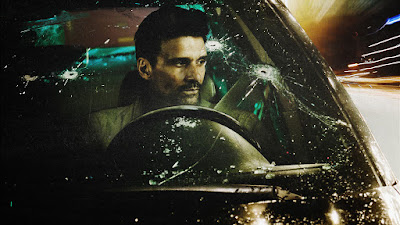 In 2016, I wrote about how American Movie is a film I’m thankful for. In it, I discussed my many attempts and eventual failures of making a movie of my own. I’m happy to say that this year’s Movie I’m Thankful For deals with the same topic, but from a different point of view.

Over the past two years, I overcame all of my self-doubt and self-destruction and I wrote, produced, and directed a short film. It’s not Citizen Kane, or even The Room, but it has a beginning, middle and end, and it’s mine. I’m proud of it. This has been one of the most satisfying and meaningful summers of my life, thanks to not only finally making a short, but because the unbelievable support I’ve received along the way was humbling and overwhelming. That leads me to Wheelman. 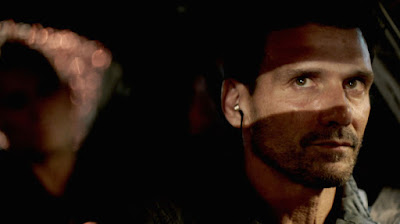 Released last October on Netflix, Wheelman is a Frank Grillo vehicle (nailed it!) written and directed by Jeremy Rush and produced by Joe Carnahan. It tells the story of the titular wheelman hired to drive the getaway car for a bank robbery, only to have things turn upside down on him, going from bad to worse minute by minute. Since Wheelman was released during Scary Movie Month, I didn’t get to it right away, but I eventually caught up with it and I dug it right off the bat. It felt like a '70s-inspired getaway movie, and it pushed all of my buttons. I saw it by myself for the first time, so when my wife said she wanted to watch a movie about a week or two later, I suggested Wheelman. Watching it for the second time with her is when something really clicked with me. Since that viewing with my wife, I’ve watched Wheelman a bunch. Like, a whole bunch.

Anyone who has ever read anything I’ve written for the site or heard me on a podcast knows that articulating why something works or doesn’t work for me is not always simple, but allow me to try. First and foremost, this is hands down my favorite Frank Grillo performance, and I’m a big fan of his. He manages to make me afraid of him one moment, and then afraid for him the next. I feel his frustrations and anger and fear throughout. It’s a truly layered performance that he manages to pull off while acting alongside his cell phone for most of the movie. 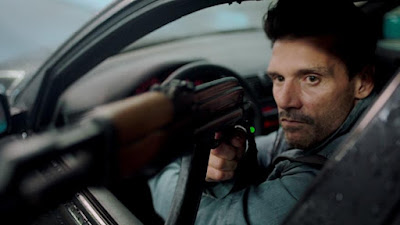 Secondly, if you told me that this was Jeremy Rush’s fourth or fifth feature, I’d believe you. The fact that it’s his first is remarkable to me. It’s directed with such confidence and skill that I marvel at it every time I watch it. Confined to Mr. Grillo’s car for 95% of the film, it miraculously never feels visually repetitive. It’s gorgeously shot. His script is also a plus for me, littered with nice character moments throughout. Something as simple as Mr. Grillo complimenting his daughter's parking near the end of the film when the shit is about to hit the fan makes me smile every time I see it.

Speaking of the wheelman’s daughter, in addition to the comfort Wheelman brought me when I felt stuck artistically, the relationship between Mr. Grillo and his daughter, Katie (played by the impressive Caitlin Carmichael), brought me a different kind of comfort. In a time when I go to bed every night worried about my own daughters, when Mr. Grillo’s concern for his daughters safety becomes palpable, I’m right in that car with him. Then at the end of the day, lessons he has taught her, combined with her own instincts, aid her in saving the day. I can’t express how much that hits me. 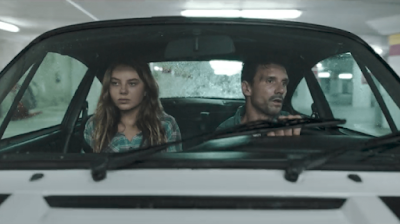 So while Wheelman was already important to me leading up to the shooting of my movie, what happened days before the cameras rolled cemented it as a film I’ll be forever thankful for. I was watching short films on the internet leading up to the start of my production, questioning what the hell I was doing, when I checked IMDB to see how many shorts Jeremy Rush had made. It listed several, so I went looking for them. A few searches yielded zero results for me, so I took to Twitter and asked Mr. Rush where I might be able to find his short films. He responded right away and asked why I was interested in watching them, noting he wasn’t often asked about his shorts. I confessed that I was days away from making my own and the next thing I knew he was sending me the most encouraging messages about making my first short. Here I was, sitting in the parking lot of PetSmart after buying a few props for the movie, writing back and forth with Mr. Rush. In years past, no matter how close I came to making a movie, something fucked it up before I could ever finish. Being so close this time around, and more well-prepared than I had ever been before, somehow made me more nervous about the whole thing. Mr. Rush’s words were the perfect message to hear at just the right time, helping erase any self-doubt I was feeling and I was actually looking forward to the process as opposed to fearing it. The three days of the shoot were so much fun, and I honestly think Mr. Rush’s kind words helped put me at ease to the point that I could enjoy myself in a way I’m not sure I would have without.

I’m thankful to Jeremy Rush, for not only writing and directing a movie I love, but for being kind to me when he didn’t have to, and for helping me let go of my fears and to embrace what was ahead of me.

Finally, I’m thankful for everyone who has reached out to me with words of support and encouragement. I couldn’t have done it without you.
Posted by Patrick Bromley at 10:00 AM