A Movie I'm Thankful For: WON'T YOU BE MY NEIGHBOR? 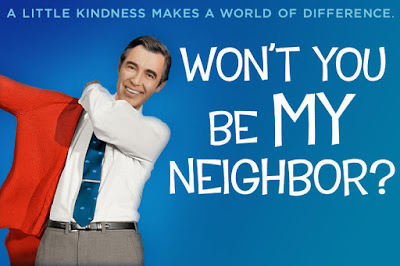 Cynicism is very safe. I’ve been repeating that to myself a lot these last few months. It’s very easy to dismiss, to obfuscate, and to suspect. Whataboutism is a crutch for the willfully unengaged. Contrarianism is the last refuge of stubborn douchenozzles who refuse to be vulnerable, refuse to allow the culture they supposedly champion wash over them in a deep and meaningful way. Everything must be conquered, beaten, out-thought. It’s obnoxious. Still, it’s hard to argue with those who can’t bring themselves to buy in. Our world is a disaster zone. Our politics are in the shitter. Our planet is melting away. The internet is a toddler with a chainsaw. Truths that were once self-evident have been cast into soul-crushing doubt. But a wise Jedi once said that no one (and, by extension, nothing) is ever really gone. Hope and love persevere as long as we champion them, and there was no more dogged champion of hope or love than Mr. Rogers. 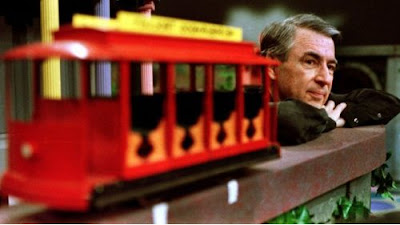 Morgan Neville’s new documentary Won’t You Be My Neighbor? chronicles the life and work of Fred Rogers, the Presbyterian minister from Pittsburgh, Pennsylvania who hosted, wrote, scored, and produced Mister Rogers’ Neighborhood, one of the most influential children’s programs in the history of American television. It’s a bit odd having to explain who Mr. Rogers is, but I know that I do. I know not everyone grew up in the Neighborhood (the show ran nationally from 1968 to 2001), and I know that even those who were age-appropriate at the time may not have had the access, opportunity, or interest. For those uninitiated, the show featured Rogers as a calm, avuncular guide who invited the viewer (his “neighbor”) to explore a wide world of hobbies, crafts, sports, and experiments with the help of neighborhood regulars like delivery man Mr. McFeely (David Newell), police officer Clemmons (Francois Clemmons), and Chef Brockett (Don Brockett).

Rogers would then invite his neighbor to the world of Make Believe, a hand puppet fantasy kingdom overseen by King Friday and his cohorts Queen Sarah, Lady Elaine, Daniel Striped Tiger, X the Owl, and other curious creatures. While his puppets had their share of neighborhood drama, Rogers, according to Neville’s talking heads, always distinguished between the world of Make Believe and the one outside. He didn’t want children to be confused about what was real and what was not, especially when he dove into difficult topics like war, divorce, disability, racism, and death. Although the ordained minister (who never actually preached — he chose television as his pulpit) intended to moralize, proselytize, and sermonize, he would not lie to his neighbors about the horrors of the world around them. He would not pretend that all problems had equitable solutions or that those who tried their best would always succeed. He simply respected children far too much for that. 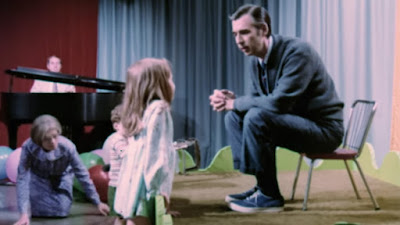 Instead, he taught them that each one of them is special, that every child has inherent value regardless of race, gender, religion, economics, or scholastic aptitude. Though he would face his share of criticism for this — one particularly sickening bit from Won’t You Be My Neighbor? features a Fox News panel dubbing him “toxic” for giving children too much self-esteem — Rogers never relented. He was a rich kid, sure. He was a man, he was white, he was educated and privileged. But he was no rube. He wasn’t naive. He didn’t believe in the essential goodness of humanity because he had never known tragedy or suffering. He believed in it because he had. He grappled with it right in front of our eyes for forty years. Those who seek to demonize his teachings for their simplicity are missing the point. Moral absolutes are heavy. They’re back-breaking. To say, unequivocally, “The world is good and full of good people”? Could you do it? 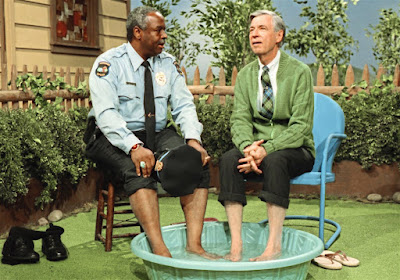 There was this Winston Churchill quote floating around last year that you might have seen. It’s since been rendered apocryphal by Snopes, but it goes like this: Churchill was urged by his advisors to cut arts funding to compensate for the ever-growing cost of war. The old man scoffed and said, “Then what are we fighting for?” True or not, cheesy as it is, it’s stuck with me. What choice do we really have but to err on the side of positivity, to invest a higher purpose? It is perfectly reasonable to be overwhelmed by the catastrophic onslaught of bullshit each and every one of us faces on a daily basis. I give up — physically, emotionally, existentially — at least three times on a good day. But to live only to doubt and fear is empty and pointless. The safety of cynicism isn’t worth the toll it takes on our souls. Optimism is messy, dangerous, and rarely pays off the way we hope it will. But without it, what are we fighting for?

Email ThisBlogThis!Share to TwitterShare to FacebookShare to Pinterest
Labels: 2018 documentaries, 2018 movies, a movie i'm thankful for 2018, fred rogers, won't you be my neighbor