A Movie I'm Thankful For: GODS AND MONSTERS 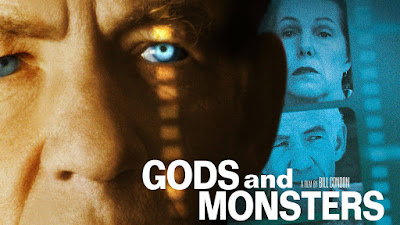 “To a new world of gods and monsters!”

There aren’t a lot of films about horror movies that themselves aren’t horror movies, but it’s consistently been one of the best and most subversive subgenres. From Shadow of the Vampire to Ed Wood, semi-biographical movies about those who worked in the genre fringes of filmmaking often manage to seamlessly balance prestige film trappings and the pure joy of schlock with charm to spare. While Ed Wood will always rank highly among my favorite films of all time, Gods and Monsters haunts and seduces me in a way very few movies do.

Like most cool kids, I decided to learn HTML and basic web design by myself when I was 12 so I could start making fansites. I made an endless amount of them: A few I was passionate about, and a lot I just made to try out a new design idea. One of the big passion projects was for Bride of Frankenstein. I became obsessed with how hilarious it was while still managing to be chilling and completely heartbreaking. Along with the book The Monster Show by David J. Skal (still a favorite) and Elsa Lanchester’s autobiography, I became fully enchanted by the entire gang behind this film. 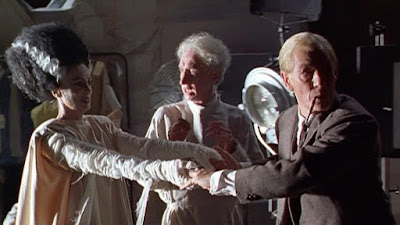 That led me down the path of its director, James Whale, who Clive Barker describes as “this gay ex-pat who went over and made these very strange, very personally obsessive movies that were incredibly popular.” Whale wasn’t particularly interested in monster movies, but as a veteran who was captured during the war, he was used to using gallows humor to find humanity among unimaginable atrocity. As a gay man whose life spanned from 1889 to 1957, he wasn’t a stranger to being persecuted as an “other,” either. The fact that the Invisible Man from his titular movie, also directed by Whale, was entertaining, stylish, quick-witted and daring in the face of the danger from a slow-witted village and its police force speaks volumes. Sure, he was the bad guy, but who wasn’t rooting for him, really?

Gods and Monsters, directed by Bill Condon in 1998, is based on the book Father of Frankenstein by Christopher Bram. It finds James Whale, played to perfection by near-doppelganger Ian McKellen, retired from directing and ill in his sunny Hollywood home. His life is mostly painting, sparring with his housekeeper, Hannah, (played by Lynn Redgrave wonderfully channeling a more naturalistic Una O'Connor, a favorite of Whale’s) and holding court by granting wry interviews with naive young men from fan magazines. The daily pattern shifts when a new gardener, ex-Marine Clayton Boone, arrives. Played by Brendan Fraser at the height of his powers, it sent a gentle shock wave through audiences and critics who were paying attention. Earlier the same year he played George of the Jungle, and his biggest hit (of course, a Universal monster property) The Mummy would come the following year. (For the record, Kevin J. O’Connor appears in both this and The Mummy, so destiny is real.) Fraser’s much-deserved comeback laid tracks this year, but anyone who caught Gods and Monsters isn’t surprised that he’s a sensitive person and an actor with more depth than he really ever got credit for. 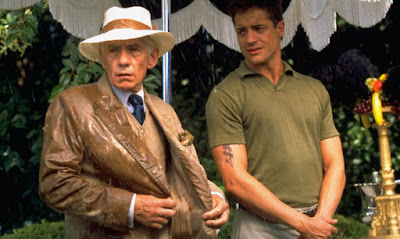 Whale slowly pulls Clayton into his life. His attraction to this man who embodies everything traditionally masculine, straight and American is catnip to Whale’s British queerness. Clayton seems all surface at first, which is a balm to Whale’s fascination and fear of his mortality. It’s the male gaze on the male form: we’re given many loving shots of a sweaty Fraser in a white tank top, but we’re also given glimpses of how much he resembles a handsome version of Frankenstein’s monster. This movie loves juxtaposition, and a great device this film indulges in is the life of the mind shown in tandem with the life of having to perform for other people. Whale introduces Clayton to deeper concepts about art and beauty between fantasizing about his housekeeper finding his dead body if he committed suicide. Clayton is fascinated by Whale, but he’s never at ease with him, especially when he finds out he’s gay. When we see Clayton alone at a bar, where he has a salty, sexual past with a waitress and an empty banter relationship with the random fellas down there, it all betrays how lonely and miserable the path he chose is.

There’s no sexual or romantic chemistry between James and Clayton, just as there was no deep fatherly relationship between Dr. Frankenstein and his creation. Their relationships both circumvent the expected roles: Wouldn’t it be just like a film for the homophobic gardener to secretly be gay? Wouldn’t it be traditionally cinematic if Dr. Frankenstein deeply loved his creation despite his monstrosities? Instead, all the characters are doomed to live on different wavelengths that pass each other constantly, star-crossed with instances of empathy, but they’ll never find purchase there. It’s romantic and poetic in the most tragic and ancient sense. There are hints of mentorship, tenderness, sadism and desperation that neither of them fully understand. The uncertainty is intoxicating. The more intelligent men assume they can easily mold the simple, strong men, but they can’t: There’s more depth there than they anticipated, and the power play will be lifelong. 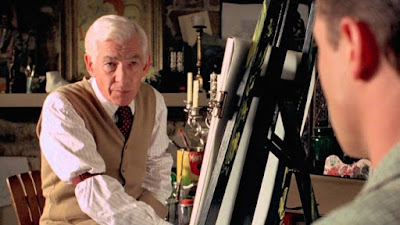 Whale isn’t portrayed as a saint. There’s absolutely no doubt that he’s lecherous towards the much younger Clayton. Still, we get a sense that McKellen understands that the script wasn’t making him out to be a dirty old man, but rather someone so isolated by brilliance and misunderstanding that being inappropriate and using his age, wealth and social standing were tools he used to stave off the darkness. Sure, there’s lust, but it’s almost immediately buried by a quiet agony. Good people can do bad things to other good people who do bad things, and this is a constant theme. Ultimately, this concept is pushed to its most tragic conclusion.

My favorite scenes in the movie aren't complex, though. One is a recreation of the resurrection scene from Bride of Frankenstein where we see a glimpse of Whale’s directing style behind the scenes, and in color! Based on interviews with him and the actors who worked with him, it shows a young, spirited man making a masterpiece out of a masterpiece. (There’s a great poetry in these acknowledged works of popular art being first written by a woman, then most famously adapted by a gay man, both working in a derided genre. Generations later, it’s important to remember that quick money was the most that was expected out of either of them at the time.) The other is Fraser, as Dr. Frankenstein, who has McKellen strapped to the famous operating table from Frankenstein in a dream sequence, where he’s about to bring him back to life with electricity. 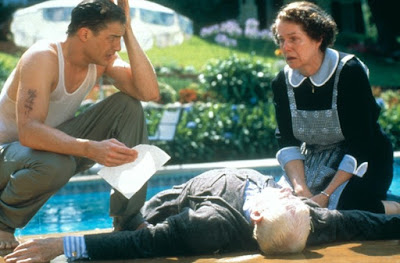 This is a quiet film. It’s a character study that spends most of its time with two men and a small handful of locations. It’s beautiful to look at, and while it is a drama, it holds so many charming, clever and funny moments that it feels like a wonderful journey rather than a trudge through some vaguely historically accurate events. Now, I’m not an elderly gay man or an ex-marine, but this movie feels so deeply personal and relatable. It’s so relentlessly honest about human frailty, and with clips from my beloved Universal monster movies added in, it feels like it unlocked a code inside me to get out some of the lonely darkness I do my best to keep buried. I revisit Gods and Monsters every few years, and as I get older, I understand more about it and what it says about all of us. I’m thankful for both its beauty and its pain, and I’m thankful for its ability to see us, scars and all, and still find some grace. I’m also thankful for cool monsters, who help make life worth living.