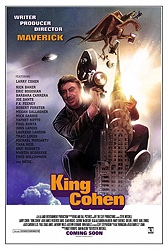 King Cohen (2017, dir. Steve Mitchell) I saw this incredibly enjoyable documentary at last year's Cinepocalypse, where I was reminded just what a goddamn national treasure Larry Cohen is. There never has been and never will be another filmmaker quite like him. It's fun to reminisce about his amazing, singular body of work, but even more fun to spend time in the company of Cohen, a born storyteller and raconteur. My favorite thing about the movie was learning about Cohen's softer side and the friendships he developed with a few Hollywood figures. He's just such a special guy.  (Watch on Shudder) 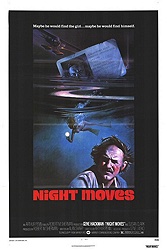 Night Moves (1975, dir. Arthur Penn) Amazon has now started posting when some movies will be leaving their streaming service, so it's helpful to know that one of the best movies of the 1970s will disappear after the New Year. That gives you just a few days to watch what might be my favorite Gene Hackman performance in one of the best noir films made since the 1940s. If you haven't seen it, stop everything you're doing and watch it this weekend while you can. (Watch on Amazon Prime Video) 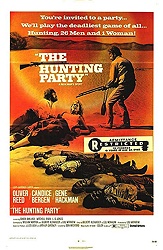 The Hunting Party (1971, dir. Don Medford) Speaking of great Gene Hackman performances, I really like him in his supporting role as the meanest, most evil piece of shit villain in The Hunting Party, a nasty western I really like but which was critically reviled back in its time. Oliver Reed and his group of bandits kidnap Candice Bergen, leading rich a-hole Hackman to give chase and systematically hunt Reed and his men. I recently recorded a "Blu-ray Discoveries" episode of Just the Discs with the great Brian Saur (it should be out some time in the next few weeks) and this movie made my list. It's mean-spirited and ugly but also really good. (Watch free with ads on Vudu) 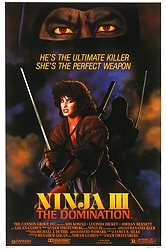 Ninja III: The Domination (1984, dir. Sam Firstenberg) Sometimes you just want to watch something moronic and fun, and Ninja III is the very definition of both. The third in Cannon's glorious ninja trilogy is part Flashdance, part The Exorcist, part ninja movie, part V-8 commercial, all awesome. Lucinda Dickey works on power lines and also teaches aerobics and then gets possessed by the ghost of an evil ninja who spends the first 15 minutes of the movie straight up slaughtering dudes on a golf course. That first scene alone makes this movie worth watching, but the rest delivers on that promise, too. This movie meant a lot to me as a young man who had so much to learn about the world and vegetable juice. (Watch on Hulu)
Posted by Patrick Bromley at 5:00 AM