One Small Step: Loss and Recovery in FIRST MAN 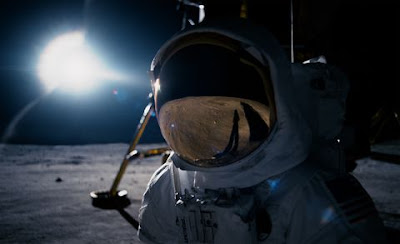 I love you to the moon and back.

Manned space flight is an awe-inspiring enterprise. Wielding nothing but rocket fuel and mathematics, physicists and engineers pierce holes in the heavens, touching the face of God and searching for new frontiers beyond the boundaries of our imagination. For sixty years, the American space program has been a miracle of innovation and a bastion of patriotism. Its exploits have not only united us as a nation, but they’ve more than once brought us inches away from true fraternity with our fellow human beings around the world. Their achievements are remarkable, their innovations essential. Hell, without the Jet Propulsion Laboratory, we wouldn’t have LEDs, CAT scans, running shoes, memory foam, baby formula, or artificial limbs. We’d have no space shuttle, no Mars rover, no Hubble telescope. Most importantly, we’d know next to nothing about the massive, sprawling universe we’re hurtling through at breakneck speed. 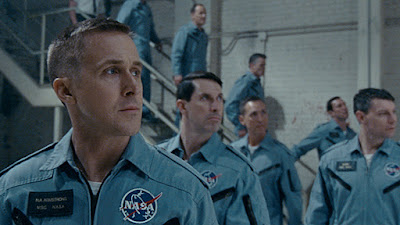 Damien Chazelle doesn’t care much about that, though. He doesn’t care about the glory of American exceptionalism or the scientific somersaults required to build machines that send men and women into the grand unknown. In adapting James R. Hansen’s book First Man: The Life of Neil A. Armstrong, Chazelle (Whiplash, La La Land) and screenwriter Josh Singer (Spotlight, The Post) focus instead on the internal battles, the journeys that stretch the distance between a father and his child, between a husband and his wife, and between a man and his soul. This isn’t the story of an American hero triumphantly smashing a red, white, and blue flag into the surface of a quivering space rock (sorry, Fox News); this is the story of Neil Armstrong (Ryan Gosling), a brilliant but withdrawn engineer still reeling from the sudden death of his young daughter and terrified that a trip to the moon is the last thing his marriage (to Claire Foy as Janet) needs.

First Man opens with test pilot Armstrong mid-flight in an experimental aircraft designed to gather data at the edge of space. Pushing through the clouds as the frame shudders and buckles around us, Armstrong discovers that he’s gone too far; he’s sliced through the earth’s atmosphere and — through mysteries of science still foreign to many of us — can’t cross back over. He bounces violently off the invisible barrier, helplessly flipping switches and slamming control mechanisms in the hopes of making just the right adjustment to stop from ricocheting into permanent oblivion. It’s a powerful metaphor foreshadowing the emotional struggles to come. Though he does bring the craft in safely, NASA sees the troubled flight as evidence that Armstrong is too distracted by his daughter Karen’s cancer diagnosis to fly. It’s true that his research is meticulous and time-consuming. It’s true that, in light of the emergency, Armstrong’s attention may not be on the Gemini program or beating the Soviets to the moon. 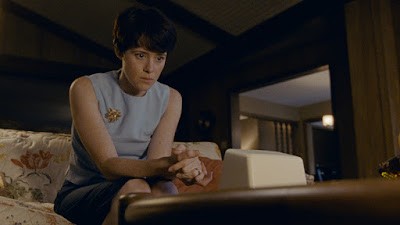 Karen soon succumbs to her illness, however, and the grieving Armstrong drowns himself in NASA’s mission and relocates his family to Houston as he awaits assignment. But this is a different Neil Armstrong, Janet complains to friends. Cold and reserved. Callus, logical, and distant. As Soviet achievements and American disasters (including the horrific Apollo 1 fire) put increasing pressure on NASA to get this lunar landing right, Armstrong dives headfirst into his research and preparation. He doesn’t want to talk to Janet about their feelings. He doesn’t know the right words to reassure his sons (Luke Winters and Connor Blodgett as Rick and Mark) that he’ll make it home from space safely. He has no idea how to articulate the sadness, anger, and desperation he feels. He can’t reassure Janet that everything will be okay, that this loss will make them stronger and that they’ll be back to their old lives soon. It won’t. They won’t.

Armstrong and his Apollo 11 crew (Corey Stoll as Buzz Aldrin and Lukas Haas as Michael Collins) make it to the moon, of course, but Chazelle and composer Justin Hurwitz do not present this defining accomplishment in American history as a bombastic orgy of celebration. They do not cut to the exalted cheers of mission controllers, nor do they frame-up a low-angle hero shot of the lunar lander touching down on the pale white powder. The landing sequence is claustrophobic, intimate. The score is droning, haunting, and repetitive. This is not Apollo 13. This is not America’s victory. Nor yours. Nor mine. This is one small step along Armstrong’s solemn, private road to recovery. As Buzz Aldrin skips across the lunar surface with all the childlike wonder befitting his magnificent achievement, Armstrong stalks along silently toward the edge of a massive crater. He checks his surroundings, making sure this is the right place, and drops his daughter’s bracelet into the endless darkness.

Armstrong will spend the next twenty-one days in quarantine. He’ll reflect on his mission and make his notes. He’ll pose for pictures and stand for debriefing. He’ll sign autographs and talk on the phone with presidents, prime ministers, kings, and queens. He’ll become a legend. But the real meaning of his journey is found in First Man’s closing shot: A pane of thick glass between them, Armstrong and his wife share a look of commiseration as Janet extends her hand to the barrier. Just a few fingers, really, a hesitant olive branch of peace and resolve. Armstrong’s decision to meet it, to tap it cautiously with his own trembling fingers, is the most heroic moment in film full of heroic moments, a profound act of contrition and one giant leap toward bridging the colossal emotional fissure between them. It won’t happen at once, and it may not happen at all (it should be noted that the real Neil and Janet would separate in 1990), but recovery is at last on the table. Peace is a possibility. The long journey home can finally begin.
Posted by Patrick Bromley at 5:00 AM